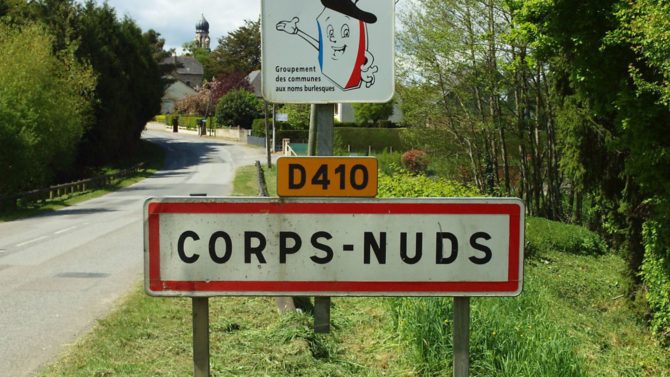 There are lots of towns and villages in France that are sure to raise a few eyebrows and a fit of the giggles simply from their name. Here are some of the funniest… (*Friendly warning* Some readers might be offended by the place names)

When you’re driving through France, there’s a good chance that you’ll have to stop the car in disbelief to stop and stare at some of the towns and village names. While some of them are laugh-out-loud funny to Anglophones, some are comedy gold in the French language too (read on to see what we mean!). But rather than getting annoyed at people laughing at them, the funny-named towns have banded together and formed an organisation that unites all the mayors who have clearly embraced the humour!

A port city in Brittany, Brest is known for its rich maritime history and naval base. It’s a lively university town, with lots of bars, restaurants and an aquarium to keep you entertained.

Translating as ‘my nipple’ Monteton is a little town situated in Lot-et-Garonne.

17 facts you didn’t know about the French

Condom is in the Gers department of south-west France and was once an important starting point on the Camino de Compostela pilgrimage. Condom is now a quiet rural market town with an imposing cathedral and the Armaganc museum.

This name of this commune in the Ariége department in south-west France is sure to have you giggling. The village doesn’t really live up to its name as its population is small, below a thousand live here and they are known as Sexois.

This Breton town’s name means ‘naked body’ so don’t be surprised if you see a few naked bodies posing beside the town’s welcome sign.

Coubisou is a beautiful village in Aveyron and its name translates as ‘neck kiss.’ Quite cute… isn’t it? Much like the village itself.

Situated in the Moselle department of Grand Est, Bitche lies near the German border in the east of France. Historical military monuments are a popular tourist attraction, as is the town’s 18th-century citadel. Its inhabitants are known as ‘bitchois.’

Translating as ‘very stupid’ or ‘big idiot’, Trecon is a little place in the Marne departement of north-west France. I wonder what its inhabitants think of the name…

The town of Montcuq in Lot achieved fame thanks to the comedy show Le Petit Rapporteur which pointed out that when spoken aloud Montcuq sounds a lot like ‘mon cul’ which translates as ‘my ass’.

Surprisingly the word ‘anus’ in French refers to the same part of the body in English but nevertheless, the town in Yonne, Burgundy goes by the same name.

27 things you need to know about French etiquette

French faux amis ready to trip you up