First published: 25 May 2021 by Helen Parkinson 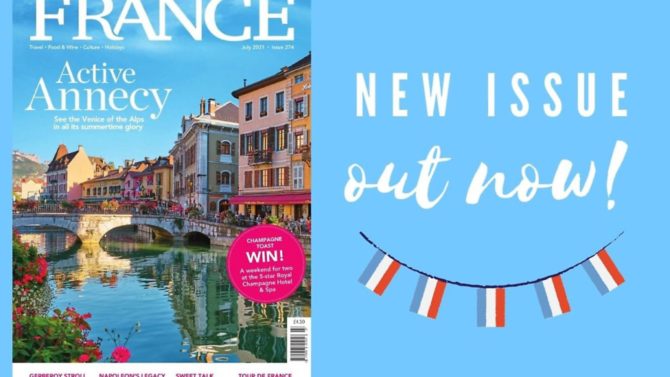 From shoe heaven to champagne’s origins, here are some of our favourite things in FRANCE Magazine’s July 2021 issue

In fact, the area was historically known for its still red wines.

Visit the vineyards of Champagne with Pierre de Villiers as he goes behind the scenes of a new documentary film all about France’s famous bubbly on P18.

2. The headpiece traditionally worn by women in Brittany’s Pays Bigouden can be up to 40cm tall

The coiffe bigoudène is part of the area’s traditional costume and is today mainly worn at festivals in the region.

Find out more about France’s traditional costumes with Helen Parkinson on P44.

3. There’s a perfect day trip destination near Paris dubbed ‘the village of a thousand roses’

Gerberoy is an exquisite village in the Oise department certified as one of France’s Plus Beaux Villages (Most Beautiful Villages).

Take a trip to this floral paradise with Peter Stewart on P34.

4. There’s a town in Northern France that doesn’t celebrate Bastille Day on 14 July

Viriat in Ain marks the special day on the first Sunday in August instead – a tradition instigated so Bastille Day wouldn’t fall during the important harvest.

5. In the rural south-east of France, you’ll find a museum totally dedicated to shoes

The International Shoe Museum in Romans-sur-Isère contains a whopping 16,500 exhibits, spanning from ancient history to the present day.

Put your best foot forward in Romans with our Quick Guide on P30.

6. The ‘Napoleon Complex’ might not be entirely fair on its namesake

Napoleon’s height was said to be around average for Frenchmen of the time, but caricatures of the general in British newspapers with the nickname ‘Little Boney’ may have contributed to myths about his stature.

Get to know the controversial statesman with Brigitte Nicolas on P61.

7. Only three of these incredibly rare French instruments were ever made.

The octobass resembles a giant double bass and only two of them are still in existence – one in Paris, the other in Vienna.

Deborah Nash is your guide for this story about one of France’s fascinating musical icons on P80.

Previous Article Meet the British artist whose images of French life have won him fans on both sides of the Channel
Next Article Interview: Lucie Bourdeu