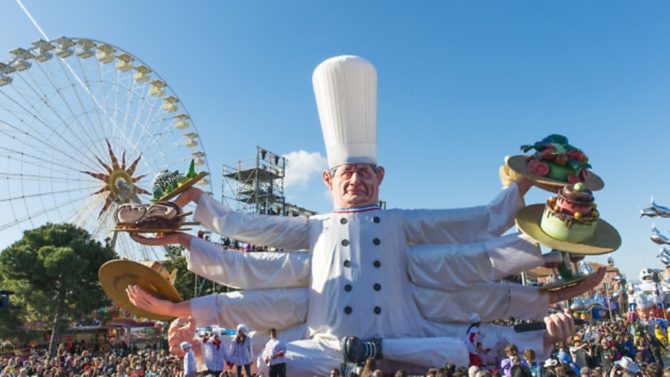 Discover some of the major events happening in France in February 2015, including colourful carnivals on the Côte d’Azur, Valentine’s Day celebrations and France’s pancake day

As one of France’s more unusual festivals, the Carnaval de Dunkerque involves fancy dress balls and kipper throwing, as well as the more traditional street parades. the carnival traces its roots back to the 17th century, when Dunkirk’s fishermen enjoyed a final fling before they set off for months at sea. The events take place over several weeks beginning on 24 January with the ‘Black Cat Ball’ and finishing on 4 April. Parades take place on 15, 16 and 17 February as well as 22 February and 15 March, and there is a ball every Saturday night attracting thousands of people in colourful costumes, ready to dance.

The town of Nyons in Drôme is rightly proud of its olive oil – granted AOC status in 1994 – and celebrates the first batch of the year with the Fête de l’Alicoque on the first weekend in February, falling this year on 31 January and 1 February. The Confrérie des Chevaliers de l’Olivier, sworn to protect the olive tree, invite the town to a tasting in the Place des Arcades. Visitors are offered toasted croutons to rub in garlic and soak in the new olive oil, and there are also dances and music.

Lovers of French crêpes will enjoy celebrating the Chandeleur holiday on 2 February, as tradition dictates crêpes de la Chandeleur are eaten on this day. The origins of the festival are religious, commemorating the purification of the Virgin Mary and the presentation of baby Jesus, and the crêpes are made as a symbol of prosperity for the coming year. According to tradition, if the pancake-maker successfully flips the crêpe while holding a coin in their writing hand, their family will be prosperous for the rest of the year.

Need warming up in the winter? Then the Carnaval de Nice is sure to add a burst of colour to a cold day on the French Riviera. The carnival is based around a different theme every year – 2015’s is ‘the king of music’. Parades of floats, musicians and dancers make their way across the city to the Place Masséna, day and night, from 13 February until 1 March. ‘Flower battles’ take place along the Promenade des Anglais, with characters in extravagant costumes throwing flowers into the watching crowd. Those keen to take part can participate in a fancy dress charity run, a group zumba class or a swim in the Med, or simply watch from the stands!

Where better to spend Valentine’s Day than in the village of Saint-Valentin in Indre? Capitalising on its name, the village holds a celebration every year on the weekend closest to Valentine’s Day, this year the 14-15 February. Houses are decorated in flowers and visitors can pin a romantic note on the ‘Tree of Vows’ in the Jardins des Amoureux.

Another French village with a romantic name is Saint-Amour-Bellevue in the heart of Burgundy’s vineyards. Couples looking to confirm their wedding vows can do so at the mairie on 14 February – as many as 30 did last year. There is also a concert in the village church and a candlelit dinner that usually attracts around 120 people.

Every year the town of Mandelieu-La-Napoule on the Côte d’Azur celebrates the mimosa flower – the iconic bloom that brightens the French Riviera with flashes of yellow in the winter months. From 18 until 25 February, parades of floral floats make their way through the town accompanied by marching bands and street orchestras. On Saturday evenings, troops of artists perform fairytale shows on the floats, and on Sundays children can take part in the ‘flower battles’. For more on mimosas, the tourist office organises coach trips, while there are also hiking routes on offer that take in sights of the fragrant flowers.

In several areas of Paris the Chinese communities organise costume parades to celebrate Chinese New Year; this year welcoming in the year of the sheep on 19 February. Accompanied by firecrackers, dancing and music, the parade in Paris’s 13th arrondissement is the largest in France, and there are also processions in the Marais and Belleville areas of the city. Large crowds gather to watch the festivities, including martial art shows and dragon dances, as well as learning about Chinese culture at conferences and exhibitions.

Taking place every year in February, the Route d’Or (Golden Route) event sees a 300-strong line-up of Citroën 2CV owners get behind the wheel and take to the roads around Grasse in celebration of France’s iconic car. The circuit passes the area’s beautiful mimosa trees – in full bloom at this time of year – and the stunning Côte d’Azur. If you’re a 2CV owner and want to take part in this year’s event, running on 21 and 22 February, there’s still time to register until the 31 January cut-off date. Those who aren’t lucky enough to own a 2CV can line the route to watch the cars pass by and enjoy a winter’s weekend in the south of France.

www.azur2cv.orgFind out what’s happening in France in January 2015

Previous Article Location spotlight: the coast of Charente-Maritime
Next Article Win a holiday in south-west France