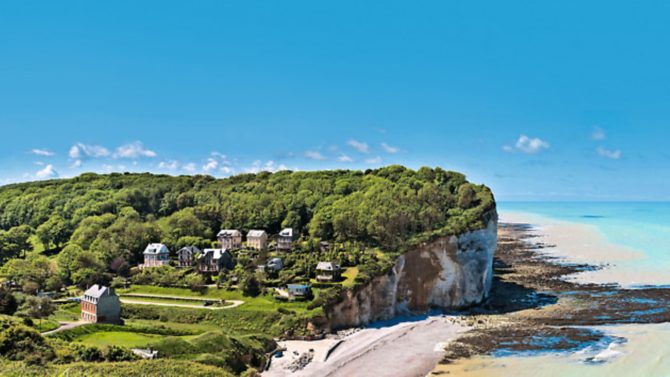 Just across the Channel, Seine-Maritime in Normandy is a popular stop-off point for visitors and was once a focal point for Impressionism. Its natural beauty, coastal charm and ancient history makes it a great place for expats to settle.

Seine-Maritime’s name might not be familiar to most visiting its shores, but its sights and landscapes certainly will be. This coastal department in Upper Normandy has famously been immortalised on canvases hanging in museums around the world, including works by Monet, Gauguin and Pissarro among others. Whether the subject of said paintings is Rouen cathedral, the lush green grasses of the Seine Valley, or the chalky milk-white cliffs of the alabaster coast, it’s clear that the many charms of this often overlooked department are inspiring to those who encounter them.

For many Brits crossing the Channel, Seine-Maritime is simply where the ferry ports of Dieppe and Le Havre welcome them through into the wider attractions of France beyond. Those who speed on down the autoroutes would do well to pause, however.

Le Havre, while once an industrial ferry port, is now something of an architectural phenomenon, thanks in large part to its 2005 listing as a UNESCO World Heritage Site. The city was heavily bombed during the Second World War, and the ensuing rebuilding – though done largely in concrete, so admittedly not to everyone’s taste – was carried out under the watchful eye of famed architect Auguste Perret, also responsible for the Théâtre des Champs-Élysées in Paris. Served by crossings including the new economie budget ferry route launched early last year by Brittany Ferries, Le Havre is also home to France’s second largest collection of Impressionist paintings, in the Musée d’Art Moderne André-Malraux.

Further along the coast to the east, Dieppe is likewise often the first port of call for those arriving on the DFDS ferry crossing from Newhaven. For the lucky passengers who choose to travel in September, docking in Dieppe sees them greeted by a riot of colourful kites fluttering off the pebble beach in the maritime breeze, as the biennial Festival International de Cerf Volant de Dieppe takes place.

Beyond the seafront promenade, the town has retained much of its elegant atmosphere from its days as a stylish Belle Époque holiday hot spot that attracted debonair society figures (including one Oscar Wilde, no less). The cobbled main street, Grande Rue, is lined with shops and cafés including Wilde’s favourite, the Café des Tribunaux on the Place du Puits Salé, where today visitors can continue to enjoy the ambiance as Wilde once did, with a mid-morning café and croissant.

For sustenance of a more substantial kind, there’s no end of delicious fare on offer in Seine-Maritime. Take inspiration from the surroundings and opt for a marmite dieppoise, a fish stew made with crème fraîche and white wine, cooked and served in a traditional marmite casserole dish. Further on down the menu, fans of fromage, as well as the sweet of tooth, are spoilt for choice. As part of the Normandy region, famous for its apples and dairy produce, Seine-Maritime is the place to try any variation on apple or salted-caramel desserts, while if the cheese trolley is more your thing, then unctuous Camembert, squidgy heartshaped Neufchâtel, or the more pungent washed rind Livarot, are typical of the area.

Landing points aside, Seine-Maritime is known for the medieval city of Rouen further inland, which adds to the department’s attractions, both for visitors and inhabitants. Here, the Cathédrale Notre-Dame de Rouen’s soaring 151m-high tower boasts the record of being France’s highest, while the building as a whole not only heralds the somewhat macabre claim of being the place where Richard the Lionheart’s heart is buried (his entrails, body, and feet, are variously buried elsewhere across France), but also featured as the subject of a famous series of paintings by Claude Monet, now displayed in various big-name art galleries around the globe.

While tours of the cathedral are available year-round, visit Rouen between June and September and you’ll be treated to a breathtaking sight, as the early summer evenings see this beautiful monument lit up in a son et lumière (sound and light) show. If this inspires you to similarly pick up a paintbrush, the tourist office opposite the cathedral offers painting classes in the very room where Monet took up his easel, while if you’d rather simply admire Impressionist works, Rouen’s Musée des Beaux-Arts is widely recognised as housing France’s leading collection, outside Paris, of art from the movement.

Rouen’s streets are lined with historic half-timbered houses – some 2,000 at the last count – with an estimated 200 dating from the Middle Ages. The city’s rich history is inextricably intertwined with that of Joan of Arc. Rouen was where she was brought to trial and eventually burnt at the stake in 1431 in the Place du Vieux Marché; only to be later exonerated and made a saint. March this year saw the opening of the Historial Jeanne d’Arc, a new and expansive €10m museum housed inside the archbishop’s palace, itself the site of her two trials and located close by the cathedral. As well as housing interactive displays and works on show, the building itself has undergone an impressive restoration allowing visitors to discover the Roman and Gothic crypts, as well as the thick stone walls of the 15th-century tower and adjoining 18th-century chapel.

Though some 60-odd kilometres inland, Rouen sits on the River Seine, and is famed for the L’Armada event, when historic ships of all shapes and sizes sail up the river and line up along the city quays for a fortnight to celebrate the history of Rouen’s port. Taking place every four to six years, L’Armada is a highlight on the city’s calendar, accompanied by concerts and fireworks throughout. The next edition takes place in 2019, celebrates 30 years of the event, and is expected to draw a record number of visitors.

From Rouen, the river leads down the Seine Valley, andtakes in picturesque spots including the pretty villages of La Bouille, Sahurs and Caudebec-en-Caux, the latter immortalised on canvas by Eugène Boudin and the former two by Alfred Sisley. The Seine meets the sea at Le Havre, and along the coast to the east is the distinctive cliff formation at Étretat, again the subject of yet another painting, this time by Monet, while further on, the town of Fécamp is home to the Palais Bénédictine, where they produce the herbal liqueur of the same name.

It’s here, in this town atop the green fringes of the fields beyond the coastline, that expat Gillian Taylor, owner of The English Centre des Hautes Falaises language school, chose to set down roots after she fell in love. “I came on holiday here for a week in 1986, and in that brief window of time, met my future husband,” she explains. “I wasn’t supposed to come. It was supposed to be my sister and her best friend, but they fell out, so I ended up coming at the last minute! I married him a year later, after going backwards and forwards across the Channel.”

As her husband’s parents had a gîte in the area, the couple stayed and absorbed the delights of the department. “The local countryside here is so beautiful,” says Gillian. “When I walk or drive around in the countryside near to Fécamp, I feel so happy and grateful to be living here. Also, ever since I’ve lived in Fécamp, everyone has been so warm, kind, and welcoming. People look after each other in a small town; since I opened the language school, everyone has really supported me.”

Gillian set up The English Centre des Hautes Falaises, where both children and adults are taught on-site, five years ago, with prior experience and a background in teaching English in France. When pressed, she admits that although not specific to the area, it’s important to be aware that there are challenges to life across the Channel. “It has been really hard to set up a business,” she says. “You have to really want to have a business. I couldn’t have done it without the support of my wonderful husband and family. I don’t regret it, however, and am really enjoying myself.”

The average price of a house in Seine-Maritime, according to the Notaires de France price index, currently* stands at €152,000, placing it roughly a third to halfway from the bottom of the list of France’s 96 departments. For Antoine Bouchayer-Mallet, owner and fourth generation of the family at the helm of Le Bois des Moutiers house and gardens in Varengeville-sur-Mer, near Dieppe, expat property ownership in the area has shifted over time: “In my experience, the number of Brits has decreased, as transport to the rest of France has become more accessible,” he says, though as he also points out, this is reflected in the market in terms of both prices and rival buyers. Visitors to his family’s Lutyens-designed property, which once drew Picasso, Debussy, and Proust to its regular Theosophist social gatherings, continue to arrive in admiration of the seminal Arts and Crafts property.

While undeniably impressive in its creation, Le Bois des Moutiers is certainly not typical of a Seine-Maritime property. Instead, you’re more likely to find a traditional colombage (half-timbered) style of house, often accompanied by outbuildings ripe for renovation, while farmhouses and longères (long one-storey buildings) are popular, and thatched chaumière (most commonly a small, simple house) properties prevail too.

With nature, history, and culture aplenty, SeineMaritime’s charms are many and varied. Having provided inspiration for a number of great artists throughout the centuries, maybe it’s time to discover it anew, and once again be inspired by all it has to offer.

Read about an expat couple and their gite renovation in NormandyRead our guides to Finistère, Côtes-d’Armor and Nord-Pas-de-Calais