Explore France with a Michelin Guide 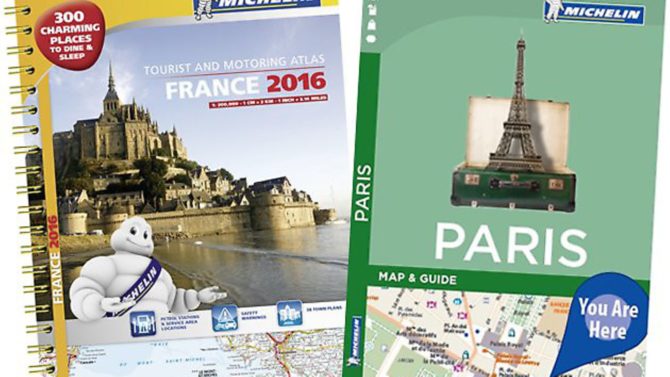 From Paris to the Côte d’Azur, Michelin Maps and Guides offer routes and information for your next holiday in France – not forgetting the best restaurants listed in the Michelin Guide

In France, people often say, everything ends up as a song. In the 1950s, while Édith Piaf was singing about the skies of Paris, Charles Trenet was merrily singing the praises of the Nationale 7. With the Michelin France National Map 721 you can explore that picturesque road so many French people took as they headed down to the Mediterranean coast.

These two legendary places, the City of Light and the Côte d’Azur, covered by the Paris Plan Map 55 and the Michelin Regional Map 527 respectively, have attracted millions of visitors every year, making la Douce France the world’s top tourist destination. But let’s not forget about the diversity of this land anchored on the European continent and stretching out towards the Atlantic Ocean, covered in detailed historic, cultural and useful information in the Michelin Green Guide France…. “I think there is no other country in the world with so many contradictions as France” said Voltaire.

Indeed, what do the steep roofs in the North have in common with the terraced roofs of the South? And how does the windswept, legendary land of Brittany, so close to its Anglo-Saxon friends, compare with the colourful Basque Country reaching down towards Spain?

While visiting France you’ll learn about its one ocean, three seas and the eight countries and neighbouring principalities that have shaped its way of thinking without ever really jeopardizing its legendary ”French chauvinism”. Whatever your destination, a host of delicious gastronomic treats, with the best selected in the Michelin France Hotel & Restaurant Guide, await you in the country’s different regions, including many wine from regions detailed in the Michelin Wine Regions of France Guide.

Another great reason to explore France from top to bottom and make sure that your travelling partner is Michelin Maps & Guides.