Escape to the Château: Angel opens up about her first year at the château 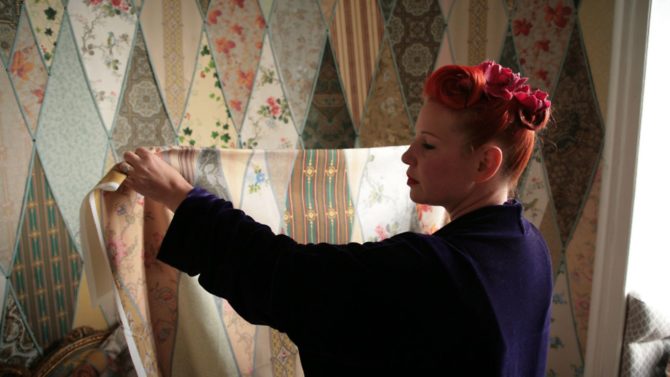 There were fly-infested rooms, bats, no electricity, and the wind rattling through cracked windows.” This might sound like the start of a late Halloween article, but in fact it’s what Angel Strawbridge’s dream home first looked like when she and husband Dick moved there five years ago.

Since they purchased the Château de la Motte-Husson in Mayenne at the start of 2015, Dick and Angel have painstakingly and entertainingly renovated their home into a successful business, taking viewers along on their journey through the

hugely popular Channel 4 series Escape to the Château. Having bought the property – 45 rooms, 12 acres, moat and all – for £280,000, the couple were left with just £20,000 to carry out the necessary repairs and renovations. And with a purchase document listing 450 faults, there was no shortage of work to be done.

Now, Dick and Angel are sharing their full journey for the first time in their recently published book A Year at the Château, which documents the trials and tribulations of their first year in France and the people they met along the way, including moments which were not shown on TV.

“The process of writing the book has been a lot of fun,” says Angel. “We both laughed a lot at some of the things that had happened – now we can see the funny side to some of the more challenging times. Reminiscing also brought some tears!”

It really has been quite a journey. Early viewers will remember watching Dick and Angel, accompanied by two-year-old Arthur and six-month-old Dorothy, find their château after no fewer than six property-hunting trips to France. Their instant love for La Motte-Husson was infectious. Surrounded by its moat, the 19th-century château stood tall and enchanting, and suddenly people across the UK were wondering why on earth they weren’t also buying a fairytale castle in France.

The first couple of months in France, however, were far from plain sailing for Dick and Angel. Relocating a young family to a foreign country is one thing; setting up home in a centuries-old property without heating or water, in the middle of January, is another. “On reflection it seems quite crazy,” says Angel, “when you consider the epic project that awaited us!”

While Angel took the creative lead on visualising the full potential of the château, engineer Dick got stuck in with DIY jobs such as using old slate tiles to reinforce the crumbling floor of the main entryway, and wading through the moat to locate the sewage pipe. With the help of a team of workmen, the house was made habitable, and the real adventure began.

“One of my favourite things about moving in was all the hidden treasures we discovered and brought back to life,” says Angel. With some parts of the castle having been hardly touched since the first owners, there were discoveries to be made around every corner from an attic full of Victorian-age children’s clothes, to the stunning wallpapers that covered many of the rooms. “Creating the wallpaper museum was a particularly special project,” Angel recalls. The museum in question was one of the tower rooms, which Angel lovingly and meticulously lined with diamond-shaped samples of antique wallpapers, to stunning effect. “Not only did that bring some of the history of the château back to life, it also inspired so many others – we were inundated with messages and photos of people recreating their own designs at home.” So popular was the patchwork design that it’s now available as part of Angel’s own interiors range.

The many other triumphs, and a few flops, that ensued over the next months are all recounted by the couple in their book, but the final events of that year bring the focus back to the real heart of the story – family.

To read the rest of the article and discover how Dick and Angel have been making the most of life under lockdown, the advice they have for anyone planning to undertake a French renovation project, and how they plan to spend Christmas at the château, order the December issue of French Property News here!

Dick and Angel’s new book, A Year at the Château, published by Seven Dials, is available in hardback at £20 (eBook: £10.99 and audiobook available)