Enjoy a fun-filled stay in Lille 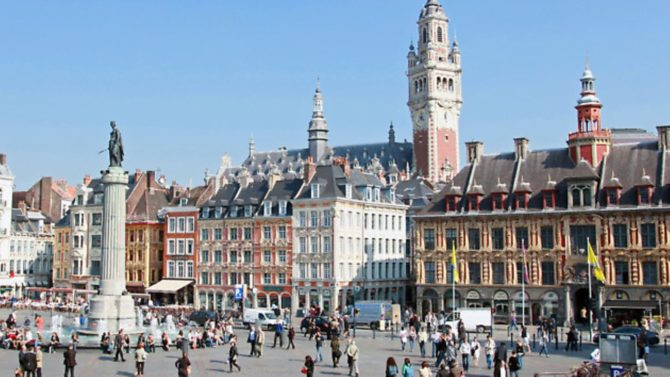 Nestled in the north-east corner of France near the Belgian border, Lille is a city with a strong Flemish atmosphere that has transformed itself from an industrial powerhouse into a cultural hub oozing style and sophistication. Just over an hour’s drive from the Eurotunnel Calais Terminal, it is a city simply waiting to be discovered with highlights including a quaint old town, fascinating museums and a stylish shopping scene.

Begin your visit by strolling around the Grand’Place, the city’s main square. You will pass myriad cafés, the 1930s art-deco building of the La Voix du Nord newspaper and the splendid Vieille Bourse. Built by 17th-century merchants in the Flemish Renaissance style, the elegantly decorated former stock exchange is made up of 24 small houses built around a courtyard that sometimes hosts a second-hand book market.

Shoppers are spoilt for choice as the Grand’Place is surrounded by winding, cobbled streets that are home to an array of designer boutiques. Meanwhile, on Rue de la Monnaie, the city’s oldest street, visitors can reflect on Lille’s past at the Musée de l’Hospice. Founded in 1237 as a hospital, the building houses ceramics, religious art and 17th- and 18th-century paintings.

For a glimpse into the life of the most famous of all Lillois, visit the Maison natale Charles de Gaulle. The wartime leader and former French president was born and brought up in this house, which holds personal items including his cradle, baptism gown and parts of his black Citroën.

Pause for refreshment at Meert, an elegant tea room that opened in 1761. This Lille institution is renowned for its gaufres, waffles filled with sweet Madagascan vanilla paste. attached to the main café is an 1830s-vintage chocolate shop with plenty of sweet treats for you to take home.

Art-lovers should head for the Palais des Beaux-Arts on Place de la République, which is the biggest art museum in France outside of Paris. On display is a rich collection of 17th- and 18th-century French and Flemish masterpieces, along with a generous selection of Impressionist works.

Families will enjoy the Musée d’Histoire Naturelle in the former university district, where whale skeletons and an insectarium help children to learn about creatures great and small. Another family favourite is the free zoo, in the Parc de la Citadelle, which is considered one of the best in France.

Lille is known for its markets, especially the annual braderie in September, when 10,000 traders line the streets. The biggest of the more regular markets is the one held on Sundays in the Wazemmes district, a 20-minute walk south-west of the historic centre, where you can buy everything from fruit and vegetables to second-hand books.

For more information on what to visit and details of hotels and restaurants, visit www.en.lilletourism.com

With up to 85 departures a day, Eurotunnel Le Shuttle is the fastest, most frequent way to the continent by car, which means that Lille is closer than you think. Book early and get the best fares. Visit www.eurotunnel.com or call 0870 850 8133 to book your crossing.