First published: 4 May 2016 by Sophie Gardner-Roberts 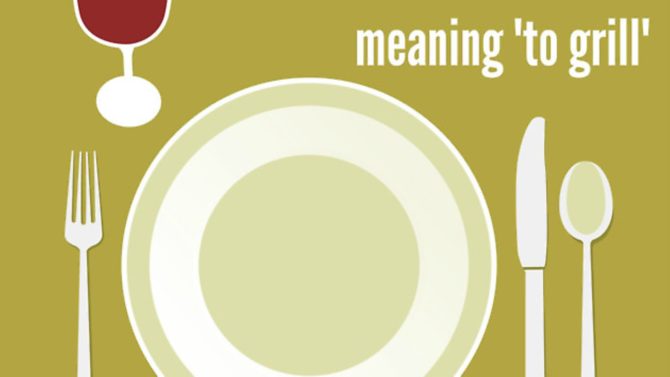 Who’d have thought one of the nation’s favourite full English breakfast ingredients first appeared in 14th century old French? ‘Bacon’ (pronounced the French way) already meant ‘meat taken from the back and sides of a pig’ and was originally exclusively cured.

As shocking as this seems, our beloved toast is in fact originally French. Indeed, in old French, the verb ‘toster’ meant ‘to grill, roast or burn’.

This word is from the French word ‘panneterie’ which was the ‘bread room’ where bread, an essential food to all French kitchens, was stored to remain as fresh as possible.

Even custard, the dessert sauce that the French sometimes dub ‘crème anglaise’ derives from the old French word ‘coutarde’ then changed to ‘crustarde’ which means ‘covered in crust’.

This word comes from the old French ‘pouletterie’ which referred to the place where the poultry was sold. The word then derived and simply referred to ‘domestic fowl’.

The word ‘caboche’ is from the middle French and means ‘a head’ in colloquial dialect. The word travelled to Canada with Jacques Cartier in 1541 and the comparison of the vegetable with the shape of a human head gave the word ‘cabbage’.

Next time you enjoy a warming, home-cooked stew, remember that the word comes from the old French ‘estuver’ which means ‘to plunge into hot water’.

This word is from the old French word ‘savor’ which has a vast array of meanings that include ‘flavour, taste, sauce, seasoning, delight and pleasure.’

This also has a French origin in the word ‘licor’ from the old French meaning ‘liquid, fluid’. The narrowed sense of ‘fermented or distilled drink’ first appeared in the 13th century.

This is a funny one as the term originated from a misunderstanding. It is believed that the word ‘alemette’ deriving from ‘alemele’ meaning ‘thin, small plate’ was misheard for ‘omelette’ when used to describe the flat aspect of an omelet.

15 of the funniest French idioms

23 French words you will hear on the radio in France

31 French phrases to use on public transport