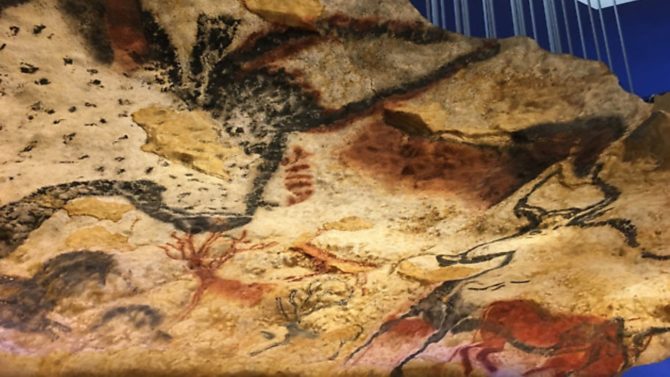 The French have drawn on state-of-the-art technology to create a stunning new replica of the world famous Lascaux caves. This is what you can expect to see

The Lascaux caves in Montignac in the Dordogne have been dubbed the ‘Sistine chapel of prehistory’ since their accidental discovery in 1940 and are home to the world’s richest collection of palaeolithic art. Now, after being off-limits for decades, the public can view the paintings as they were meant to be seen at the recently opened Centre International de l’Art Pariétal where state-of-the-art digital technology has transported millennia-old cave art to the 21st century.

The cave, with 2000 paintings featuring animals such as bulls, bison, deer and horses was first discovered by a group of boys in 1940. However, the site was closed to the public in 1963 after it emerged that years of carbon dioxide and humidity produced by the many tourists to the cave had damaged some of the paintings. The site was granted UNESCO World Heritage status in 1979, and four years later in 1983 a facsimile of the paintings, known as Lascaux 2, opened next to the site. This replica featured a limited set of reproductions, but advances in digital scanning produced Lascaux 3, a set of free-standing panels representing more of the original cave that has been touring the world since 2012.

Lascaux 4, however, takes the facsimile to a whole other level. The £57 million project used cutting-edge technology, with three-dimensional digital scans of the original works projected onto the walls allowing the artists to painstakingly trace the originals using natural pigments. “Here, we reach a whole new level in terms of helping people to understand what Lascaux represents for science, the history of art and prehistory,” said Francis Ringenbach, the project’s artistic director. Ringenbach, who is himself a sculptor, added that it was a time-consuming process which required the utmost skill and attention to detail. “Absolutely all the work you see on the wall has been engraved, worked and sculpted, chiselled by hand, with little paintbrushes and sometimes even tools used in dentistry”, he added.

This new and complete reproduction of the cave has been constructed from casts of the digitally scanned walls, with the interior surfaces painted by a team of 25 artists from the Atelier des Facsimilés du Périgord. The replica cave and accompanying exhibition spaces are housed in an impressive complex designed by Norwegian architects Snøhetta. ‘We want to allow visitors to experience the cave as it was in 1940’, says Snøhetta’s on-site architect, Rune Veslegard. To do this, the designers leading the project have ensured that the replica respects the same darkness, smells and temperature (which is a cool 15 °c) as the original. Visitors to the site will also be greeted by the sounds of four boys and a dog barking, without whom this extraordinary discovery might never have been made.

For information on opening times and ticket prices visit projet-lascaux.com

Guide to the department of Dordogne