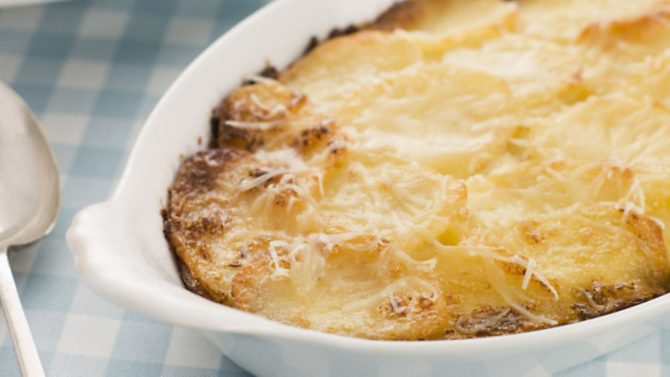 This rich side dish from south-east France combines potatoes, cream and a hint of garlic. Rosa Jackson shares a recipe for this classic French dish

At its simplest and most authentic, gratin dauphinois has only three ingredients besides salt and pepper: potatoes, cream and garlic. The garlic is not chopped but cut in half and rubbed on to the gratin dish to impart a subtle flavour. Cheese is banned from the true gratin dauphinois, turning it into a gratin savoyard. Making the gratin only with cream, which may be thinned with or replaced by full-fat milk, gives it a melting texture and a delicate flavour, and also makes it more suitable for serving alongside meat.

Though most recipes call for about an hour’s cooking time, I came across one that suggests baking the gratin at 100°C (212°F) for four hours, giving the potatoes time to slowly absorb the liquid and acquire a pale golden crust. The author said that dauphinoise housewives would have placed the dish in the oven at low temperature on a Sunday before going to church, coming back to find the perfect gratin. The recipe here, adapted from French Slate magazine, seems a good compromise, giving the potatoes an hour and a half at 150°C.

[Serves 4] This recipe has classic proportions and a slow cooking time, which makes the gratin creamier. If you wish to speed up the process a little, you can heat the gratin on the hob before placing it in the oven – but make sure your dish is both hob and ovenproof.

Butter for the gratin dish

2. Cut the garlic clove in half and rub a medium gratin dish with the cut side. Butter the dish.

3. Slice the potatoes thinly using a knife or a mandoline. Arrange in layers in the gratin dish, slightly overlapping the slices.

4. Whisk together the cream and milk, and season generously with salt and pepper.

5. Pour the liquid over the potatoes. A few slices can peek out, but the potatoes should be almost entirely covered.

6. Place the gratin dish in the oven and cook for 90 minutes, or until the potatoes are soft and the surface is golden brown.