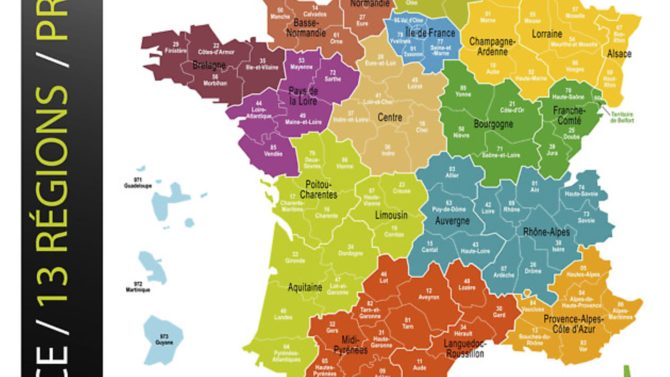 In an effort to save money and reduce administration, France has reduced its regions from 22 to 13. We keep you updated with the changes and what it could mean for property buyers

After much debate, France’s National Assembly voted for a new 13-region system with regions being combined to form new ‘super regions’. This began on 1 January 2016 with the names of the new regions and the new capitals to be announced during 2016.

The following regions are staying the same:

But the following regions will be joined together to form larger regions:

• Alsace, Champagne-Ardenne and Lorraine – to be called Grand Est

• Upper and Lower Normandy – to be called Normandy

Currently the departments are remaining the same but there will be discussion over which city will be the regional capital and how administrative functions will be organised.

What effect will the new region structure have on property buyers?

The restructuring of France is an attempt to simplify bureaucracy and save costs – but what effect, if any, will it have on property buyers? “We don’t believe that the recommendations, which may well make administrative sense, will have any bearing on house-hunters,” says Sally Stone, of property company Les Bons Voisins. “Our experience is that people choose a general area which suits them, in terms of climate or amenities, and are then governed by budget, more than by a specific region.”

Trevor Leggett, of Leggett Immobilier, agrees: “The merging of certain regions won’t have any effect on the demand from British buyers – they come here for the sunshine, great value property and quality of life, not our administrative boundaries. However, merging Midi-Pyrénées and Languedoc-Roussillon, for example, will create a huge region. From one side to another, it will have different climates, scenery and dialects, so local knowledge will come to the fore as buyers look to get accurate information.”

Patrick Joseph, of My French House, also stresses the importance of local knowledge: “I believe it will be even more important that people research the areas they are looking to buy in before embarking on viewings. Now that the regions are going to be so much bigger, the regional characteristics, property types, prices and weather will vary even more from one area to the next. It is therefore vital that buyers talk to people who know those areas and the differences between them.”

Find out why France decided to change its regions