This is why you should visit Aude Cathar Country in Occitanie 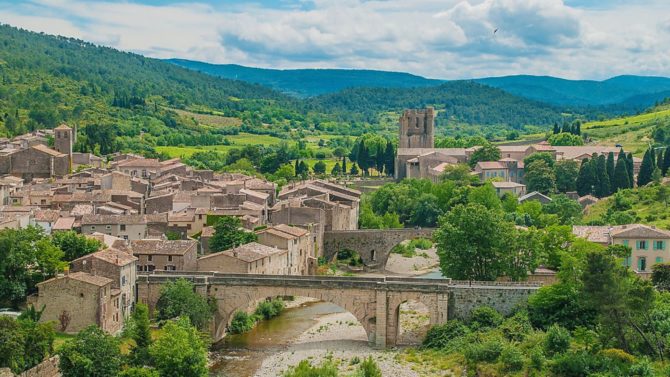 Deep in the south of France, Aude is a land of history and tourism, warmth and authenticity. From its Cathar castles to the Canal du Midi, the medieval cité of Carcassonne and the beautiful village of Lagrasse, Aude has a unique character

Whether you stay in Carcassonne or explore the surrounding area, are looking for vineyards, nature or culture, planning a short stay or a longer holiday… there is always something to discover in the Aude, Cathar Country.

Take a gentle stroll among some of southern France’s prettiest villages:

Situated south of Carcassonne, and in the heart of the Upper Valley of Aude, lies Alet-les-Bains. It boasts timbered houses, ramparts, a magnificent abbey, a medieval village, where everyone will feel rejuvenated.

The Upper Valley of Aude is the largest European fossil site for the last dinosaurs and their eggs. They are displayed in the Dinosaur Museum in Espéraza, 10km from Alet-les-Bains, which tells the history of the Earth in a fun, educational and dynamic way, across 2500m² of exhibition space. While the reptiles, mammals and plants all have their place, the dinosaurs are the real stars of the show. Look forward to a surprising encounter with a T-Rex!

Located 40km south of Carcassonne in the Upper Valley of Aude, is Rennes-le-Château, in the heart of the Cathar country. With a rich past steeped in history, it boasts exceptional views and famous mysteries, including the mystery of Abbot Saunière who, while working in the village church in the 19th century reportedly found a fabulous treasure and documents ‘so important they could change the face of the world’…

Rennes-le-Château offers several sites to visit where the riddle of Abbot Saunière is still present: the church of Sainte Marie-Madeleine, its gardens, the presbytery – which is now a historical and cultural space – and Abbot Saunière’s domain, which gives access to the Tower Magdala and the Villa Béthania, and the oratory.

Every two years the unusual art film festival takes place in Rennes-le-Château with the next one in August 2019.

Castelnaudary is a peaceful town on the banks of the Canal du Midi, an exceptional heritage in Aude, reflected in the Grand Bassin, between the locks of Saint Roch and the Isle of Cybele. Today, commercial traffic has given way to boating, marked by a series of locks and small bridges. All along the canal, areas are specifically designed so that you can tie up your boat and discover the villages, monuments, local products, wine cellars and restaurants. The towpath leads you to the Canal du Midi for cycling, hiking, running or pétanque matches

Montolieu, 20km north of Carcassonne means ‘the mount of olives’ in Occitan, and is built on a promontory overlooking the gorges of two small rivers. The high rectangular tower bell of Saint André dominating the rooftops of the village is the most characteristic image of Montolieu. The village experienced an eventful history and a long period of prosperity from the 17th century. The town used to house La Maufacture Royale, a linen factory that was built for Louis XV, and you can still admire the factory buildings.

Nowadays, Montolieu is a ‘book village’. Libraries, booksellers and craftsmen share the medieval streets of the town, where are books markets are held every third Sunday of the month.

In the town an old wine cellar has been transformed into an art centre, the Collection Cérès Franco, with a new exhibition held there each year.

Near Carcassonne, the small town of Caunes-Minervois is nestled around a massive abbey. As well as its abbey, Caunes-Minervois has the remains of the ramparts, and a remarkable architectural heritage. Its narrow streets and beautiful mansions are the most complete example of Renaissance architecture in Aude.

You will come across red marble sculptures that invite you to visit the open air quarries which made Caunes famous! The marble quarries (The King’s Quarries) made the town wealthly and famous. The crimson marble of Caunes was especially used to make monuments in Paris, including at Versailles and the Opera Garnier, as well as Rome… Throughout the region you will find many monuments and churches made using this marble of Caunes as design elements. Nowadays a part of the quarries are still working and can be visited and there is a marble and sculpture fair in Caunes-Minervois in June.

You will appreciate the laid back way of life in this small town, you will also enjoy a good choice of restaurants, crafts workshops, wineries and local shops.

The village of Lagrasse, ranked among the ‘most beautiful villages of France’, is located in a vast amphitheatre surrounded by vineyards and small enclosed fields. It was once the little capital of the Corbières and the village was surrounded by ramparts. It retains its rich and unique architectural heritage, with its famous Benedictine abbey, and medieval centre on the banks of the Orbieu.

The picturesque streets, the timbered houses, the covered market dating from 1315, the many mansions, the impressive 16th-century church of Saint-Michel with a rich interior, the 12th-century bridge on the Orbieu, are all testimonies to Lagrasse’s glorious past.

Daily direct flights from London Stansted to Carcassonne have opened up south-west France, making it a perfect destination for short breaks all year long.

Previous Article Ways to save money when driving in France
Next Article Join our team! We are looking for a staff writer