Ways to save money when driving in France 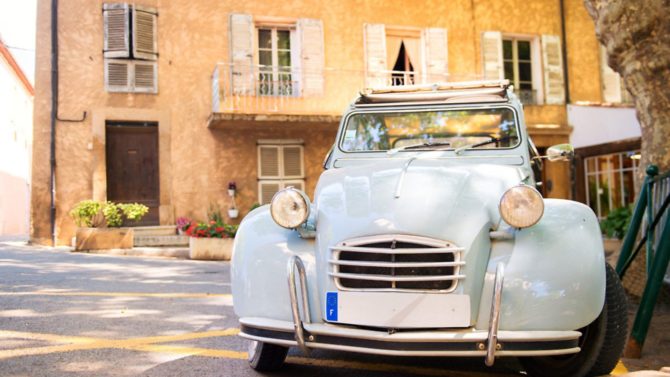 Taking the car to France is a preferred option for many British homeowners, but paying for fuel and road tolls can quickly add up. Here are six ways to cut the costs of driving in France

Shop around for petrol and diesel

Right now you can buy unleaded petrol in France for around €1.38 a litre, on average. This is pretty much what petrol costs in the UK, as at the time of writing the average price at the pumps is £1.19 or €1.36 a litre. There’s more of a price difference when it comes to diesel, which retails at €1.26 a litre, again on average.

Everyone knows that motorway service stations tend to charge more for fuel than supermarket garages. Yet, while we invariably know where the cheapest local service stations are in our neighbourhoods, the chances are you won’t know where to stop when driving abroad. This is no small point, as prices per litre fluctuate widely at service stations across all of the 96 French departments. For example, you could pay as little as €1 a litre for petrol in Côtes d’Armor or as much as €1.89 a litre in Paris. If your car has a diesel engine you could be charged anything from €1.17 a litre in Hautes-Alpes to €2.2 a litre in the Ariège. And then there is the considerable cost variance at the numerous service stations within each of these departments. For this reason, it makes sense to identify departments that are cheaper for fuel, on average, and keep an eye on the pump prices as you pass though these regions. After all, it could cost you anything from around €60 to €132, a difference of €72, to put 60 litres of diesel in your car, depending on where you stop.

Find out where the cheapest fuel is

You’d be crazy to drive too far out of your way to secure the very best deals, especially as you can avoid too much stress and expenditure with a little pre-planning. This French government-produced website is a good place to start, as it shows regularly-updated fuel prices at every station in all of the country’s departments.

It’s also worth downloading a service station locator phone app, such as Moricarbu, that displays the cost of fuel at any garage within your vicinity, and generates a map showing you how to get there.

Give your car a home service before setting off

Scouring the land for the best places to refuel is only one way to keep the costs down – there are lots more ways. For example, it’s essential to give your car a home service before setting off, checking the oil, water, power steering and coolant reservoirs, all of which will help make the engine run smoother. Don’t forget to adjust the tyre pressure if you’re filling the boot with luggage, as the extra weight will increase each tyre’s foot print. By increasing the pressure to the recommended level, the car won’t guzzle more fuel to compensate for the additional drag.

It’s possible to get all the way from Calais to Spain without ever driving on one of France’s motorways, the autoroutes. However, don’t be lulled into thinking that avoiding these highways is a sure-fire way to cut costs.

Let’s say you’re hankering after a move to the French Riviera, and plan to drive to Nice for a reconnaissance from Calais. The fastest way to get there is on the autoroutes, which will cost €107 in tolls and take 12 hours. Alternatively, you could avoid the toll roads and take the scenic route. This option may seem cheaper, but it probably isn’t, as you’d spend almost €20 more in fuel. Also, even with two drivers you’d almost certainly require a stop-over, as you’ll spend an estimated 20 hours behind the wheel.

Get a Sanef tag to avoid lengthy queues at toll booths

Autoroutes are by far the most efficient way to travel long distances in the shortest time, but it can be frustrating queuing to pass through a toll, or péage. On a busy route or day, you could spend what seems like an eon shunting towards the payment machine. The alternative is to subscribe to the Sanef toll scheme , which gives you access to the fast lanes thanks to a small radio transmitter tag that slots into a small holder placed behind the rear view mirror. The tag talks to the toll booth, which raises the barrier just before you reach it, so there’s no stopping. Sanef charges a €20 security deposit – which is refunded when you return the tag – and a non-refundable €10 application fee. There is also a €5 fee that’s imposed each month you use the tag and, of course, you’re charged the same as anyone else does for passing through a barrier. The tags may cost, but you’d need to weigh up their benefits, especially if you’re hoping to pack as much in on a househunting expedition. Avoid the hassle of spending time entering your card details or feeding the payment machine with euros, not least as you’ll avoid burning fuel waiting to pass barriers and in putting your foot down to make up for lost time.

Obey the speed limits and remove speed detectors from your car

You risk more than draining the fuel tank if you hammer the accelerator, due to the abundance of speed cameras on French autoroutes. Fortunately, speed cameras are well signposted, as are the speed limits, which are typically 110km or 130km on the autoroutes. Fines for speeding are high and, unlike a few years back, improved technology and communications means penalties will chase you across the Channel, so you will have to cough up eventually. Note that in-vehicle speed camera detectors are illegal in France, regardless of whether or not they are being used, and this includes satnavs. Penalties can include fines of up to €1,500, confiscation of the device and of the vehicle. If your satnav is capable of showing camera locations in France, you must disable camera alerts. If your satnav system is built into your car, the AA recommends contacting the vehicle manufacturer.

10 insider tips for travelling by train in France

How to avoid other fines

Wherever you drive you’ll be subject to certain laws, such as those covering speeding and drink-driving. However, France has some rules that could prove far more costly than a fuel tank of petrol.

Under French law all vehicles much carry high-visibility jackets, one for each passenger. These need to be kept in the passenger compartment. If your car breaks down, you and all passengers must wear a high-vis jacket as soon as you leave the vehicle or you could face a €135 fine. A warning triangle is another must if you don’t fancy paying a €135 fine, as is a spare light bulb kit and headlamp adjuster stickers (if your car does not have a switch to automatically realign your lamps) so oncoming vehicles approaching you from the left-hand side of the road won’t be blinded. Failure to have spare bulbs or lamp adjusters could cost you €80 and €90, respectively.

One quirk of French law is a requirement to carry a breathalyser, which you can pick up for around £5 at most service stations. Theoretically, motorists face a fine for not having one on board, although the government has indefinitely suspended this requirement. In any case, given the small outlay it may make sense to carry one, just in case the government changes its mind.

Since March 2017 all cars being driven in certain cities, currently Paris, Lyon and Grenoble, must display an emissions sticker. Drivers who fail to comply face on-the-spot fines of up to €135. The anti-pollution sticker can be obtained for €3.70 plus postage via the Crit’ Air website.

Get the right level of insurance and breakdown cover

All UK motor insurance policies provide a minimum of third-party cover for driving in France, and other EU countries. Some insurers will offer a higher level of protection for driving abroad, but even if you have a ‘premium’, ‘gold’ or ‘platinum’ policy, ensure you read the T&Cs before travelling to establish what you’re covered for. If you only have third-party cover and would like a greater level of protection contact your insurer to arrange an upgrade.

All French autoroutes are privately operated, so you can’t call on the likes of AA, Green Flag or RAC to come to the rescue should your car break down. Instead, you’ll need to use the orange emergency telephones, which are planted every 2km along the roads. A regulated company or the police will escort you to either to a garage or a convenient drop-off point where you can meet your breakdown assistance company. This may seem convoluted, but it’s the rules. For a relatively low outlay from around £10, breakdown cover may save you a small fortune if the worst happens – unless you understand French well enough to explain the inner workings of the internal combustion engine.

Crusing on a canal barge: the best way to see Champagne