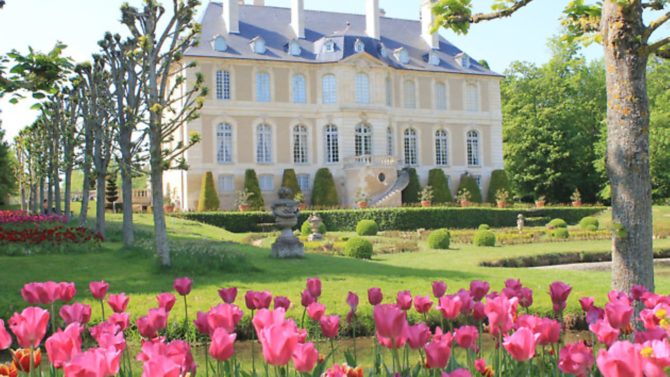 Discover some of the major events happening in France in April 2015, including a tulip festival in Normandy, a tough cycle race from Paris, a light show in Chartres and a nature festival in Picardy

1 April sees France celebrate Le Poisson d’Avril (April Fools’ Day), when unwitting participants find paper cut-out fish stuck on their backs in a traditional prank. Easter Sunday on 5 April, meanwhile, is marked among other ways byles cloches volantes, said to be church bells returning from their Good Friday departure to the Vatican, where their deliverance of grief for the crucifixion is replaced with joy – and chocolate – for the resurrection.

Spring is well and truly in the air at the Château de Vendeuvre in Calvados with the annual Festival de la Tulipe. During the month of April the château gardens are covered with thousands of colourful tulips for visitors to enjoy, along with a number of other striking features including a Japanese tea pavilion, a Chinese bridge and several 18th-century lime trees. The château is open from 2pm until 6pm throughout April and entry to both the château and gardens is €10.50 for adults.

The infamous cobbles of the Paris-Roubaix cycle route in northern France have been graced by many a professional cyclist, and proved a difficult stage of last year’s Tour de France. Along with the Alpe d’Huez and Col du Tourmalet, the Paris-Roubaix route has become a must for all enthusiastic riders in France. On Saturday 11 April amateur cyclists can attempt the challenge – known as the Hell of the North – for themselves and have the choice between a 170km, 141km or 70km race. Alternatively, armchair cyclists can sit back and watch the elite riders tackle the cobbles the following day.

As dusk falls in the town of Chartres in central France, areas of the centre light up for the Chartres en Lumières show running from 11 April until 10 October. iconic sites and historic buildings, such as the UNESCO-listed cathedral, form the backdrop to the impressive light show. you can tour the sites on foot by yourself, or book a guided tour at the tourist office. Alternatively, hop on the Petit Train de Chartres and take a ride around the town with a commentary from the driver.

Kite flyers of every age and ability from around the world descend on the beach of Berck-sur-Mer in Pas-de-Calais every year to join in with the International Kite Festival, this year running from 18-26 april. As one of the largest kite festivals in the world, it attracts a great variety of kites, from traditional design to the latest technology, and there are night displays, demonstrations and a variety of stalls – something for all the family to enjoy.

There can’t be many more scenic places to run a marathon than around Lake Annecy, with the Alps to one side and the clear blue lake to the other. This year, the race starts at 8.30am on Sunday 19 April, and follows a route along the western bank of the lake. Alternatively, there is a half-marathon which starts at 2.30pm, while there’s also a children’s race and a Nordic walking race during the day, plus the beautiful town of Annecy to explore afterwards. Although the route is fairly flat, participants can still legitimately claim to have run a marathon in the Alps!

With its lakes, valleys, sand dunes and cliffs, the Bay of Somme in Picardy in northern France is a haven for wildlife. Visitors are invited to discover the magic for themselves at the Festival de l’Oiseau et de la Nature from 23 April until 2 May. Timed to coincide with the best time to bird watch, the festival offers guided nature rambles, photography exhibitions, wildlife documentaries and workshops designed to reveal the secrets of Picardy. Tours are available on foot and by other means of transport; as well as birds, visitors can expect to spot seals relaxing in the bay.

www.festival-oiseau-nature.comVisiting in March? Here’s a guide to some of the key events in March 2015

Previous Article Planning a year abroad in France
Next Article WIN! Not Quite Nice by Celia Imrie