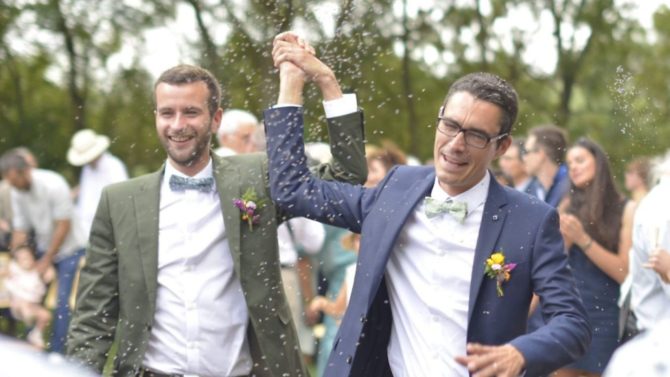 Chris Murphy, 28, met his French husband Quentin Brillant, 28, when they were students at Cardiff University he explains…

Quentin came over on the Erasmus scheme as part of his history degree in 2013. We got chatting in the bar – I tried to impress him with my appalling French! Thankfully he wasn’t put off and things went from there.

At the end of his Erasmus year he took a year out so he could stay in Cardiff. After that he had to go back to Nantes to study while I went back to Newport where my family are from and got a job as a teaching assistant.

We only managed to see each other about every two months that year which was tricky – especially outside of summer when there were no direct flights from Bristol to Nantes.

We had conversations about who should move to where and in the end it was easier for me to move to Nantes as Quentin was still studying – so I did. My French was still pretty bad but I got a job with an agency babysitting for people who wanted a sitter who could speak English to their children.

In summer 2017 we went on holiday to Wales and I took Quentin on a walk up a hill in Snowdonia – he didn’t know I’d hidden a ring in some socks in my backpack!

About halfway up he was complaining he was tired and saying maybe we should go back, but I just said we had to carry on.

At the top I told Quentin I was going to ask someone to take a picture of us both with the view but actually it meant I had a picture of my proposal!

We got married exactly two years later in Quentin’s home village of Maillezais in Vendée – I’m pretty sure we were their first same-sex wedding.

We still live in Nantes – I have my own business teaching English and Quentin is a tour guide. My spoken French is now pretty much fluent and at home we speak about half English, half French.

The most romantic places in Paris

Previous Article Brexit Day: What does it mean for prospective French property owners
Next Article Chimney sweeping, theme parks and oysters: 12 discoveries from the March issue of Living France