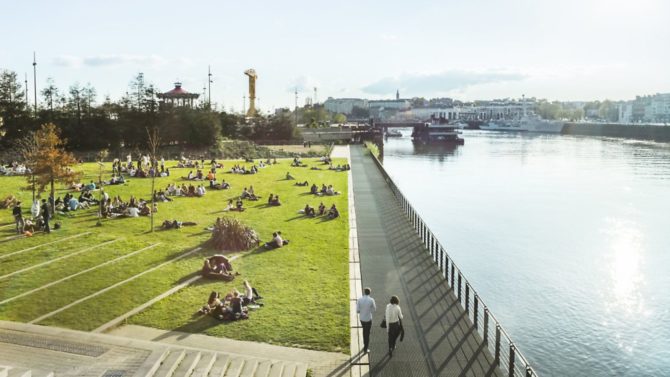 Ideally living in France would mean drinking wine, eating cheese and shopping at the local market but unfortunately most people also need to earn a living to fund their new life in France. So where in France offers the best work-life balance?

A survey by French newspaper L’Express has revealed the most desirable towns and cities in France to both work and live in. In order to rank which areas were best for living, the survey took things such as the weather, transport systems, affordable housing and air quality into consideration. For work life, the duration of the train journey to Paris, levels of unemployment and creation of jobs determined where in France offered the best professional life. These are some of the towns that came out as the best places to live and work in France.

Nantes was named as one of the best cities to live and work in France. Once France’s most important port and then an industrial centre, the capital of the Loire-Atlantique department was known locally as une belle endormie, a ‘sleeping beauty’. But following major rejuvenation, the city has awoken with a jolt; emerging, not as France’s prettiest town, but as one of its most culturally alive, with a reputation for being edgy and playfully vibrant.

It is a family friendly city with Les Machines de l’Île de Nantes, home to a number of mechanical animals including a 12-metre-tall elephant; the Musée Jules Verne and it’s interactive displays of his most famous book Around the World in Eighty Days, and the Musée d’Historie Naturelle.

Even on your way to work or during your lunch hour, strolls in and around the city will be enlivened with quirky art installations that pop up in parks, gardens and city streets. It can sometimes seem that no space has been left unturned in the city’s urban renewal project and even some of its old industrial warehouses have been rejuvenated to house trendy cafés and artist studios.

It is also home to classic culture, including one of the country’s best symphony orchestras and a top opera company in Théâtre Graslin, perfect for an end-of-week night out. Weekends off work can be spent strolling around the pedestrianised city centre and shopping along the Rue Crébillon and the neo-classical Passage Pommeraye shopping arcade.

With big names such as Airbus coming to Nantes, as well as other smaller companies, it’s no surprise that between 6,000 and 9,000 people move here every year, in what is becoming one of France’s fastest-growing cities. Its latest refresh may have revived the city as a cultural capital, but regardless of what direction Nantes takes next, it will no doubt remain one of France’s most popular places to live and work.

Lyon may be France’s third largest city after Paris and Marseille, but it arguably offers the same quality of life as many of its smaller towns and villages. Situated at the confluence of the Saône and Rhône rivers, the capital of the Auvergne-Rhône-Alpes region is famous the world over for its food. Boasting some 2,000 restaurants, many of them holding Michelin stars, Lyon comfortably lives up to its reputation as the gastronomic capital of France. Yet despite its celebrated haute cuisine scene, it is in the city’s classic bouchons (bistros serving up traditional, timeless dishes) where hearty dishes sit atop red-and-white checked tablecloths that the locals come together to eat and drink.

You’ll have no excuse not to eat well in Lyon as every one of the city’s nine arrondissements has its own food market. There is also the city centre Marché St-Antoine with over 100 vendors and the famous Les Halles de Lyon Paul Bocuse indoor market, where you can pick up the very best produce for the week ahead before sitting down to a long, lazy Sunday brunch.

But there’s plenty more to do in Lyon besides wining and dining. The city’s newest neighbourhood, the Confluence area, where the two rivers meet, is enjoying a new-found buzz. Once an industrial district, a multi-million euro project has transformed the area into a trendsetting hot spot, populated with environmentally friendly, outlandish buildings, a shopping complex and a rock-climbing centre.

The area is also home to the state-of-the-art metal and glass Musée des Confluences that houses a scientific and anthropology collection and a converted sugar warehouse where you can enjoy a cocktail on the rooftop bar. Work to make the area more liveable is currently underway and the entire project – which will include a residential and market district – is due to be completed in 2020.

Lyon is known for being very business friendly and as such, is a popular place for expats who are considering setting up a business in France. There is also the added bonus that Lyon is an ideal base to explore other European spoils. The Alps are within easy reach and a 90-minute drive will take you to the beaches of the Mediterranean Sea.

With such a well-established Celtic culture, the region of Brittany is a home away from home for many British expats in France. Capital of the region since it was incorporated into France in the 16th century, Rennes has a distinct Breton character and proudly celebrates its Celtic heritage. Although much of the Old Town was destroyed in a fire in 1720, the ancient half-timbered houses that survived still charm lovers of medieval architecture today.

With a student population of over 60,000, the Breton capital is a city for the young at heart. But the 9-5 brigade are by no means left out of the lively scene, as the city has establishments where anyone and everyone can pop in for un verre. After a typical 35-hour working week, the most popular place for workers to head to is Rue St-Michel to unwind. Lined with wall-to-wall bars and pubs, you’ll quickly find out why it is known locally as ‘Rue de la Soif.’

There are a total of 20 markets in Rennes, including Les Lices, the second largest in France. The market takes place every Saturday morning, and it seems like the whole of Rennes converges here. It is as much a social occasion as it is a place to stock up on the essentials.

If you want to make the most of your lunchtime break, slip off into one of the city’s green spaces such as the 18th-century Parc du Thabor. Here in the former abbey, you can find themed gardens from French to English and botanical. In the summer months, the garden hosts classical concerts, musical theatre, poetry readings and on Wednesday afternoons there is traditional Breton dancing.

Even though it is compact, the city has a single-line metro system that runs from the north-west to the south-east of the city, with a 24-hour pass costing €4 that is interchangeable with the bus. As of July 2017, the city’s transport links will improve further with a new high-speed train reducing the journey to Paris to 1h25. To tie in with the train launch, a new project called EuroRennes is in the works. Set to house offices, shops, cultural facilities, houses and corporate companies, it will no doubt bring another business boost for Brittany’s first city.

16 traditional towns and villages in Brittany you have to visit

Who wouldn’t want to live in the wine capital of France? As well as boasting more than 115 hectares of vineyards in the area, Bordeaux is an up and coming city that is growing its reputation as a great city to live and work in as well as an ideal city break location. Bordeaux has seen many changes in recent years with a vast clean up operation by the mayor eventually leading to the city’s inclusion on the list of UNESCO World Heritage Sites in 2007.

In the heart of the city is the Triangle d’Or where you can shop in designer stores and boutiques, watch the Bordeaux national opera and ballet, relax in the 30-acre Esplanade des Quinconces or watch children enjoying the water jets in the Place de la Bourse.

If it is wine you are interested in wine then Bordeaux’s new star attraction, the Cité du Vin will appeal. With interactive exhibitions taking you through the history and process of wine production plus a glass of wine and incredible views on the panoramic terrace, what is not to enjoy?

The quality of life is one of the main reasons people move to Bordeaux, as well as the fantastic weather and delicious local wine the city is in an excellent location. You can spend your weekends exploring the city, relaxing by the river or in a café or you can get out and explore the area – you are close to both the coast and the mountains.

Bordeaux has a fairly dynamic economy with the tourism industry booming in recent years and this is expected to improve further with now a new high-speed rail link between Paris and Bordeaux is open. This will reduced the travel time from Bordeaux to Paris to just over 2 hours, hopefully boosting the city’s economy and bringing in more visitors.

Toulouse is capital of the Occitanie region in southern France. Again the weather and quality of life is a big part of why Toulouse is one of the best cities to live and work in.

Known as ‘la ville rose’, Toulouse is famous for its terracotta-coloured architecture and Renaissance hotel particuliers. The main square is the Place du Capitole, dominated by the grand pink Capitole building which houses the city hall, opera house and theatre.

The city is perfect for food-lovers with numerous bistros serving up local specialities like cassoulet and confit de canard, and traditional markets, such as the covered Marché Victor Hugo where you can buy Toulouse sausages, charcuterie, duck and geese to create your own masterpieces.

The Canal du Midi begins in Toulouse so weekends can easily be spent cruising the canal and stopping off at any of the pretty villages along the way. The Pyrénées are close by for hiking or skiing, depending on the season, and Toulouse airport is one of the major airports in the south of France if you want to head a bit further afield.

The aviation industry is a crucial part of the economy in Toulouse, home to Airbus and a number of other companies, and the city has also become Europe’s leading space centre. The city also has a lively student population thanks to the university and various business and engineering colleges.