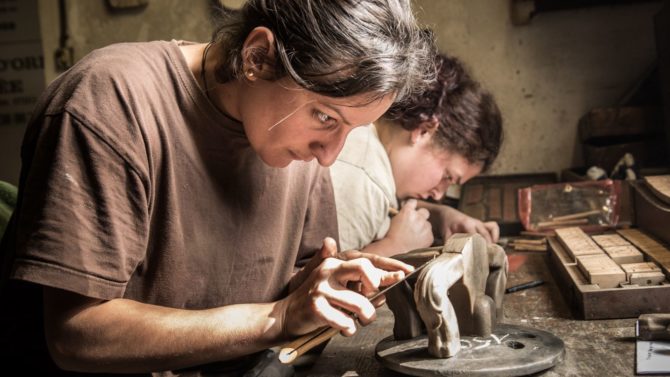 I wonder how many people have noticed the pride that French artisans, be they chocolate makers or stonemasons, take in their work? Watch a baker present his newly baked croissants with a flourish, speak to a stonemason about his craft or observe a cheesemaker at work – the sense of fierté is always there. And for good reason. Most of these craftspeople or artisans will have gone through years of training and many of them belong to the association of Les Compagnons du Devoir.

What is the association of Les Compagnons du Devoir?

Loosely speaking, the Compagnonnage is an apprentice scheme, but in fact it is more a way of life. Its origins go back to medieval times when craftsmen, notably stonemasons and carpenters, travelled around the country learning the skills of their trade and working on the construction of France’s magnificent cathedrals and châteaux. In England, the equivalent would be ‘journeymen’, who in the Middle Ages went from place to place learning new skills in order to become ‘master’ craftsmen. But whereas in England this tradition died out, in France it is very much alive and responsible for the exquisite quality of craftmanship in so many domains.

The training is long – three to 10 years depending on which métier is chosen – and includes a ‘Tour de France’, where the apprentices spend six months to a year in one location, learning from a fully fledged compagnon before moving on to the next placement. For the first year, the students stay in one place and live together in a compagnon house under the auspices of a prévot and a maîtresse de maison.

This is where the scheme differs from other apprentice schemes as some of the medieval traditions and rituals are still upheld. They are rooted in the motto, ‘Ni se servir, ni s’asservir, mais servir’ – ‘neither self-serving nor subservient be, but serve’ – which is reflected in values such as commitment to their chosen profession, honesty, respect and perseverance. So, a moral education as well as a professional one – the aspiration is not just to be a good worker but to also be a good man (or woman!).

If students are no longer fined if they keep their hats on inside the house, or for singing vulgar songs, they still have to come to the table suitably dressed and obey certain rules of communal living, including sharing chores, or gâches, as they are known.

Some would find this restrictive but bear in mind that many of these young people are away from home for the first time and some are as young as 15, when they start their apprenticeship.

When asked if the house rules were a little annoying, Léa, now a compagnon boulanger, said that it was just like living at home where you had to help with clearing the table or putting out the bins.

Flore, who is an aspirant peintre décorateur, has chosen this year to do her placement in her home town of Rennes, commuting to Tours for two-week stays in the maison du compagnonnage every few months or so. Her love of colour drew her to this calling and she talks affectionately about the compagnon family and the importance of the support it provides: “C’est une famille, une fraternité du début jusqu’à la fin” (“It’s a family, a fraternity, from start to finish”).

What are the benefits of doing the scheme for young people?

Of course, some students do drop out, but it is usually early on and because they have found another pathway in life – the ones that stay are in it for the long-haul. So, what keeps these young people engaged? Of those interviewed the same themes come up time and time again – the friendships forged in the compagnon house being top of the list. Léa says the best part is meeting so many different people, from all different areas and walks of life: “Il y a tellement de moments de partage et de rigolade. C’est extraordinaire et génial”.

Another plus is the opportunity to travel. Léa was 15 when she started her apprenticeship in Bordeaux and her Tour has taken her to Cagnes-sur-Mer on the Côte d’Azur, Paris and now Nantes. She hopes to spend next year in the Pays Basque and after that there is a possibility of a placement in Bermuda. Her compagnon parrain is setting up a bakery over there. Everyone on the Tour has a parrain (mentor) who is already a compagnon of the same trade, and who follows his or her protégé throughout their journey.

And thirdly, there is the breadth of experience and skills that are learnt during their training. Students start as stagiares, progress to aspirants and then to compagnons. There are two pieces of work to be completed (as well as numerous qualifications) along the way.

Students present their travail d’adoption in order to become an aspirant and receive their first walking stick symbolising the start of their Tour and their ‘colour’ (a sash representing their chosen métier).

Aspirants are also given a compagnon name which indicates where they are from, and later when they are accepted into the brotherhood a quality is added too, so Léa is known as Poitevine l’humble courage compagne boulanger du devoir.

After being ‘adopted’ there follows several years of touring (the length of time depends on the trade chosen) after which they present their travail de réception (their chef d’oeuvre) to be accepted as a compagnon. At reception they are given a new walking stick with the seal of their trade on the top. Then there are three more years of travelling and gaining experience, before they can be called compagnons sedentaires qualifying them to live and work wherever they want – and to train others.

What sort of skills can you train in?

François is learning to be a cheesemaker. He joined the association after trying several other professions and has not yet been ‘received’.  Cheesemaking is a new addition to the list of métiers and in fact François, as the very first one to start on this pathway, has found himself responsible for looking after the five other would-be cheesemakers who are coming along behind.

As an aspirant he has already received his first walking stick and his colour (yellow as his category is the same as Léa’s – métiers du goût). The blazon that will be added to a new walking stick when he is received has not been created yet, as this is all new territory. At the moment, François is in Haute-Savoie learning about mountain cheeses and next year he will be checking out the competition with a placement in Italy. One day he hopes to have his own cheese shop promoting French cheeses to the world.

Simon was studying engineering when he realised he really wanted to work with his hands. Now he is on the Tour (currently in Italy) as un tailleur de pierre, which involves not just cutting and building with stone but also elements of architectural design. Tailleurs are in great demand for the restoration of historic monuments, as are charpentiers and other skilled craftsmen (witness their indispensable contribution to the restoration of Notre-Dame after the devasting fire in 2019). However, Simon, although he does like restoration work, is more interested in using natural stone in the construction of modern buildings.

Simon’s Tour started in Rodez in Aveyron and has already taken him to Nantes, Strasbourg and Macon. After Italy, he will go to Nîmes where he will prepare his chef d’oeuvre to be accepted as a compagnon. This represents between 400 and 800 hours of work – a testament to the commitment of the artisans and the resulting quality of craftmanship. Many compagnons create a chef d’oeuvre for the maison de compagnonnage where they are staying.

In Angers, where Ludovic Colin is prévot, the wood-panelled walls and carefully crafted furniture are reminiscent of the English arts and crafts movement. Ludovic, whose chosen trade is plasterer, won several awards in national competitions for his work while on the Tour, but his interest lies in encouraging youngsters on their journey. Mentoring and the passing on of knowledge is another important part of the ethos of the compagnons.

Ludovic’s Tour took him from Bordeaux and Albi in the south to Nantes and Lille in the north, before settling in Angers where he would like to stay after his three-year stint as prévot. He sums up the Compagnonnage as: le savoir-faire (skills and knowledge), le savoir être (learning to respect yourself and others) and le savoir vivre (learning to live in a community, be it family, workplace or society at large).

As we are realising more and more the damage that our ‘throw-away’ society has done to the planet, and the time of ‘pile ‘em high, sell ‘em cheap’ is no longer in vogue, the compagnons are coming into their own. There are some 60 compagnons in Britain and another 50 who are on the Tour here, but let’s spread the word and encourage other youngsters of all nationalities to take up this rewarding way of building their future. And next time you are in France look out for that label ‘Compagnon du Devoir et du Tour de France’, as you’ll be in for a treat!

For more about the association, visit their website. You can also visit the Musée du Compagnonnage on the edge of Tours’ old town, housing exquisite examples of chef d’oeuvres made by les compagnons.