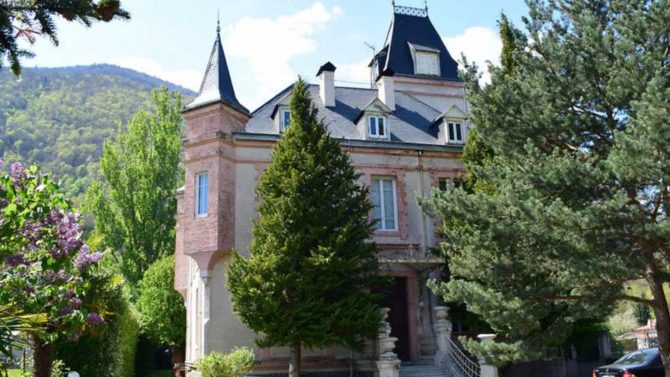 Looking for a romantic old château or grand family home to restore or refurbish in France? These renovation projects are all on the market for less than €500,000.

€59,000, Pyrénées-Orientales
With its amazing mountain views and amenities on your doorstep, this old post office in the village of Serdinya could make a showstopping home or business. There is potential for six bedrooms here and, with two separate entrances, you could create a B&B or gîte business.

The house, in the sheltered Têt valley, is located on the main road to the ski slopes (40 mins away) and is only 45 minutes from an airport and TGV station, with Mediterranean beaches 10 minutes beyond.
Artaxa

€100,000, Deux-Sèvres
Live in a renovated cottage while you do up an elegant house in the land of the Loire Valley châteaux. That’s the offer with this tantalising project just 29km from Saumur in the heart of the Anjou wine region.

The one-bedroom gîte is ready to live in while you work on the main house, which has three bedrooms and a large attic. Both houses benefit from recently installed microstation-style septic systems and are set in 2586m2 of land.
Leggett

Get your creative juices flowing in Gascony with this grand house to renovate in the historic village of Miradoux, only 15 minutes from Lectoure. Offering a whopping 350m² of living space and a roof that is just 11 years old, the 17th-century building boasts substantial oak beams, a wine cave, courtyard, garage and high windows with views over the Gers countryside.

The top floor with its intricate woodwork could make a fabulous suite. You will, however, need a substantial budget and a love of old buildings.

€199,800, Charente
Just 10 minutes’ drive from Aubeterre-sur-Dronne, one of the most beautiful villages in France, this ‘maison bourgeoise’ is brimming with potential.

Dating back to the early 18th century, it has five bedrooms, two bathrooms, characterful stonework and a romantic old fortified door. There’s an enclosed courtyard garden to the front and good-sized land to rear with extensive views. Montmoreau with its amenities and train link is also only 10 minutes away.

€210,000, Champagne-Ardennes
You’d be lucky to buy a broom cupboard in central London for the price of this fairytale château three hours from Calais and two hours from Paris. Really only requiring a bit of modernisation, it was previously run as a holiday let generating over €2,000 a week.

There are four bedrooms plus a roomy loft space and a separate one-bedroom apartment to finish off, with plumbing and electrics already installed. You could live in this apartment while renting out the main château, which is in a village with shops and amenities within walking distance.

€219,420, Morbihan
Looking for a big old bargain in Brittany to bring up to date? This detached stone and slate house, in a village not far from the shops, has five bedrooms, is on mains drainage and comes with a separate smaller house to fix up too.

The pair sit in a 1,800m2 garden with a garage and well, near the villages of Credin and Rohan.

€345,600, Hérault
Huge potential is offered here at this former wine domain in a village with lots of amenities 15 minutes from Béziers and less than 30 minutes from the Mediterranean coast. The property comprises a maison de maître with 180m2 of living space, a caretaker’s house, two wine barns and two stables, all surrounded by courtyards and a garden.

You’ll need a substantial budget, but with hard work, investment and imagination this could be a showstopping property.
Real Estate Occitanie

€425,531, Vienne
Boasting ornate plasterwork and marble fireplaces, this grand house is in the heart of Châtellerault, a stroll from a train station from which you can be in Paris in 1h30. It dates back to the 18th century and sits in a 1281m2  plot with garages.

Currently, there are four bedrooms, plus a vaulted cellar, two-room attic and an annex to do up that has previously been rented out. With Tours, Poitiers and Futuroscope nearby, the property has plenty of business potential.

With no fewer than 10 bedrooms and six bathrooms, this ornate château has all the makings of a luxury B&B. Guests would no doubt admire the panoramic mountain views from its tower. The property is in a small village close to shops, services and activities, and only 15 minutes from the motorway and train station.

The owners have started the renovation by adding new insulation in the attic and a new roof. It’s just a 25-minute drive to Bagnères-de-Luchon with its ski resort, and the local area also offers mountain biking, road cycling, rafting, horse-riding, lakes and beautiful walks.

€469,000, Dordogne
Handsome and historic, this twin-towered manor house near Mareuil in north-eastern Dordogne requires mainly cosmetic work. It’s in an elevated position close to amenities and is surrounded by five acres of land (including truffle woodland) with a large detached barn (possible to create a floor above), garage and small stable block.

The house currently has four bedrooms accessed by a stone spiral staircase.

Previous Article Can you guess which 3 French towns are the best to live in?
Next Article Compagnons du Devoir: Discover the other Tour de France