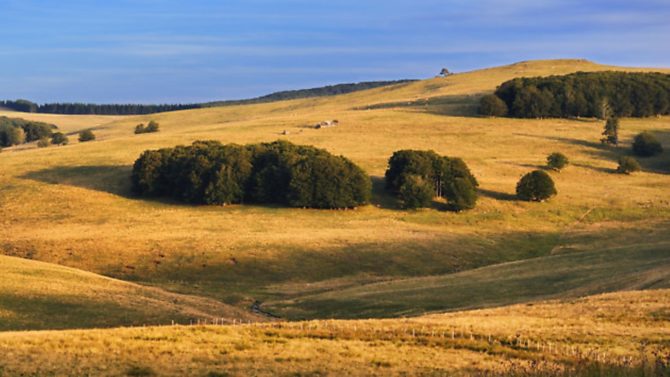 With 103 inhabitants per square kilometre compared to 262 in the UK, it’s clear that France offers plenty of space for anyone seeking peace and tranquillity. Away from the towns and cities you can drive for miles without seeing another car, with vineyards and sunflower fields stretching off into the distance. Areas that were once remote are now easy to access thanks to improved transport links and have a back-to-nature appeal for holidaymakers and those who yearn for a simpler way of life. What’s more, they also offer some of the cheapest properties in France. We’ve picked out five of France’s least populated departments to discover what they offer.

Lozère (Languedoc-Roussillon; population density 14.9/km2): Lozère is the only Languedoc-Roussillon department without a coastline – or the crowds – but what it lacks in beach it makes up for in mountains, including the Cévennes national park, not to mention vast forests and tumbling rivers like the Tarn and its spectacular gorges. In summer the mountains offer a pleasant respite from the searing heat of the south, while the high ground sees snow in winter. Even the main town Mende, on the River Lot, is relatively small with just over 12,000 inhabitants, while the sous-préfecture Florac in the Tarnon valley has a population of less than 2,000. Notable spots include the spa town Bagnols-les-Bains, and the Plus Beaux Villages of Ste-Enimie and La-Garde-Guérin. To reach Lozère you have a choice of five airports in Languedoc-Roussillon, as well as Rodez in Aveyron. Although many ‘Lozèrians’ left the area in search of work in the cities, the population has actually increased slightly in recent years due to incomers seeking a better quality of life. Property is typically rural – stone village or country houses and some mountain chalets. At €110,000, the average house price is some €50,000 under the national average, and considerably less than the regional average of €182,000. By sector, Mende’s average is €112,600 and Florac is €105,000. To view properties in Lozère, click here.

Creuse (Limousin; population density 22/km2): On the north-west edge of the Massif Central, and named after the river, the Creuse department is made up of rolling hills, steep valleys, dense forests and fields full of red Limousin cattle. It is also home to one of France’s largest lakes, Vassivière, which has leisure beaches and small ports. Summers are warm, winters relatively cold, while the high rainfall keeps the landscape green. Over the last four decades of the 20th century, Creuse experienced the greatest proportional population decline of any French department, falling by 24% from 1960 to 1999. Nowadays the well-preserved landscapes and lack of pollution are a magnet for tourists, who appreciate not only the countryside but also the heritage which includes châteaux, abbeys and pretty villages. Although remote in the past, access is easy now, via Limoges airport. The main urban areas are the departmental capital Guéret (population 13,844), sous-préfecture Aubusson, Bourganeuf, La Souterraine and spa town Évaux-les-Bains. The area is popular with househunters – no surprise when you hear that the average house price of €73,000 is some €87,000 under the national figure and €32,000 under the regional average. By sector, prices average €80,000 in Guéret and €60,500 in Aubusson. Farm buildings and village houses are in plentiful supply. To view properties in Creuse, click here.

Alpes-de-Haute-Provence (Provence-Alpes-Côte d’Azur; population density 23.2/km2): As the name suggests, this department on the Italian border offers a combination of Provence and the Alps, with both lavender fields and rocky peaks. Nature is at the forefront, with over 500,000 hectares of protected natural sites, while the north of the department is home to ski resorts like Pra Loup. Hiking is also popular, with some 6,000km of trails. The rural exodus of the mid-19th century onwards has been somewhat reversed in recent times. To the south, Haute-Provence is the most populated area, where you’ll find the préfecture and spa town, Digne-les-Bains (population 17,172). The Gorges du Verdon, known as Europe’s Grand Canyon, are also in the south, while other sites of natural beauty include the Mercantour national park and Luberon regional park. Although Barcelonette, Castellane and Forcalquier are sous-préfectures, Manosque and Sisteron are larger towns, while Moustiers-Ste-Marie is a Plus Beau Village. The closest airports are Nice and Toulon. The lower valleys offer a Mediterranean climate, with snowy winters in the high peaks, and a mixture of both in the lower Alps. Properties vary from chalets to stone village houses and Provençal villas. The average house price of €170,000 is considerably below the regional average of €290,000, while by sector, prices vary from €135,000 in Castellane to €185,000 in Forcalquier, with Dignes-les-Bains (€162,000) and Barcelonette (€180,000) in between. To view properties in Alpes-de-Haute-Provence, click here.

Cantal (Auvergne; population density 25.7/km2): Named after a range of extinct volcanoes, this central department on the south-west edge of the Massif Central offers spectacular scenery, particularly at the Plomb du Cantal, Puy Mary and Truyère gorges, with plenty of outdoor activities on offer, including skiing at Le Lioran resort. The cultural heritage includes castles and churches, and the only real industry, apart from tourism, is agriculture, including the production of the AOC cheeses Cantal, Salers and Bleu d’Auvergne. The main towns are the departmental capital Aurillac (population 28,207), St-Flour, Mauriac and Murat, and there are two Plus Beaux Villages: Salers and Tournemire. One of the most remote parts of France (Aurillac is said to be the furthest departmental capital from a motorway), Cantal has experienced significant depopulation since the mid 1800s. Despite the backwoods location, UK visitors can fly into Auvergne’s Clermont-Ferrand airport (seasonal flights), with further airports at Rodez, Limoges, Lyon and Brive. With altitudes ranging from 250m in the Lot valley to 1,855 on the Plomb du Cantal, it’s no surprise that temperatures vary, but summers are generally hot and winters cold, particularly on the Margeride and Aubrac plateaux. From farmhouses and barns to village houses, property offers great value for money, with an average price of just €105,000, and just €60,000 in the Mauriac sector (€80,000 in St-Flour and €120,000 in Aurillac). To view properties in Cantal, click here.

Gers (Midi-Pyrénées; population density 30.1/km2): Named after the river, Gers used to be part of the historic province of Gascony and is known for produce such as armagnac, duck, foie gras and wild mushrooms. Rolling hills, sunflower fields and sleepy villages full of stone and half-timbered houses are typical, with distant views of the Pyrénées – a skiing day trip is quite possible, while the Atlantic beaches are in the other direction. Summers are hot and sunny, winters mild. Indeed, the main town, Auch (population 21,792) is one of the warmest in France. The proximity to the Atlantic and Pyrénées means that the weather can be changeable though. The year-round population swells in summer as holidaymakers pour in, especially to the department’s five Plus Beaux Villages – Fourcès, Larresingle, Lavardens, Montréal and Sarrant. There’s enough room for it not to feel busy though, and the gentle landscape is ideal for walking and cycling. The sous-préfectures are Condom and Mirande, both on the River Baise, while other towns include Marciac with its popular jazz festival, Barbotan-les-Thermes, Eauze, Fleurance, Gondrin, Lectoure, Nogaro and Vic-Fezensac. Access is no problem, with a choice of Pau, Toulouse, Lourdes or Bordeaux airports. Given all these attractions, it’s a welcome surprise to hear that the average house price is just €143,000, considerably less than the national average. This rises to €170,000 in the Auch sector, but is only €123,800 in Mirande and €130,000 in Condom. To view properties in Gers, click here.

Looking for a French property? Click here to view a selection from across the country.