The story of Joan of Arc 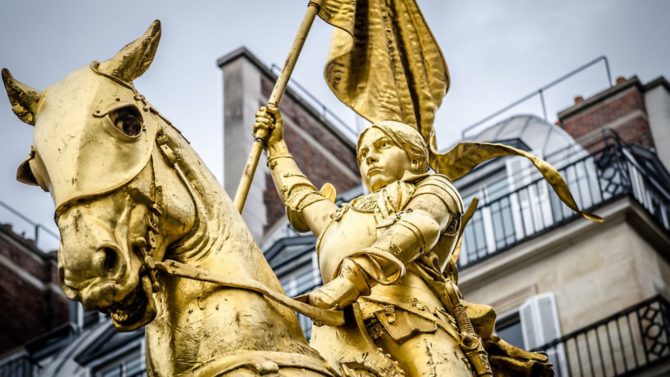 More than 600 years after France’s greatest heroine was born, Peter Stewart traces Joan of Arc’s quest to become the saviour of France

Nicknamed the ‘Maid of Orleans’, Joan of Arc was a military leader who reputedly acted under divine guidance. A national heroine in modern France, Joan was just 18 when she led the French army to a momentous victory at Orléans, preventing the English from conquering France during the Hundred Years’ War.

Joan was born in 1412 in the village of Domrémy in Lorraine to tenant farmers Jacques d’Arc and his wife Isabelle. In early childhood, she learned valuable skills from her mother, and became a talented seamstress.

From 1420, Joan started to experience mystical visions encouraging her to lead a pious life. The visions became increasingly vivid; she claimed to hear the voices of Saint Michael and Saint Catherine designating her as the saviour of France and encouraging her to meet the dauphin – the future Charles VII.

In 1428, Joan travelled to the nearby village of Vaucouleurs to meet Robert de Baudricourt, the garrison commander and a supporter of Charles against the English and their Burgundian allies. Baudricourt initially refused to speak to her, but later relented after witnessing the support she received from the villagers. Early in 1429, he offered her a horse and an escort of several soldiers to take her to Chinon in the Loire Valley, where Charles had his court. Joan cut her hair and dressed in men’s clothes for the 11-day journey.

Charles was initially wary of Joan, a peasant girl who proclaimed that she alone could save France. However, Joan soon impressed him with her ability to identify him, dressed completely out of character, among a crowd of his courtiers. Joan and Charles held a private conversation, during which Joan divulged details of a prayer that Charles had made to God to protect France.

The life and work of Gustave Eiffel

Becoming a soldier of France

In April 1429, Charles allowed the 17-year-old Joan to accompany the French army to Orléans, which was under siege from the English. In a series of battles from 4-7 May, the French took control of English fortifications. Joan was wounded but returned to assist with a final assault. By mid-June the French had shown that they were a force to be reckoned with.

In spring 1430, Charles VII sent Joan of Arc to the town of Compiègne to confront the Burgundians. Joan was thrown from her horse during the battle and left outside the town gates, where she was taken prisoner. After extensive negotiations, the Burgundians handed Joan to the English in exchange for 10,000 francs.

When English church officials insisted that Joan be tried as a heretic, Charles VII made no attempt to save her, as he was still unconvinced by her divine inspiration. Following a trial in Rouen, Joan of Arc was found guilty and burnt at the stake on 30 May 1431.

Charles VII later ordered an investigation into her death, and in 1456, she was declared innocent of all charges and designated a martyr. Joan of Arc was canonised on 16 May 1920 and is now the patron saint of France.

Learn more about Joan of Arc at…

This small village in the Vosges département is the birthplace of Joan of Arc. The family house was listed as a monument historique in 1840 and has been carefully restored. Visitors can see the room in which she was born, her bedroom, the cellar and her brothers’ bedroom. Nearby, the Centre Johannique contains displays chronicling the life of France’s national heroine.

It was here in 1429 that Charles VII received Joan of Arc, who had come to pledge her allegiance to the French crown. This impressive fortress includes a series of rooms chronicling the Joan of Arc legend through the centuries.

The capital of the Centre-Val de Loire region was the site of Joan of Arc’s most important battle against the English and now has several monuments in her honour. The 16th-century Hôtel Groslot, the former city hall, houses a wealth of memorabilia, while Hôtel Jacques Boucher, where Joan of Arc stayed in 1429, contains multimedia displays as well as a research centre that documents everything written or filmed about her. Other highlights include the stained-glass windows of the Cathédrale Sainte-Croix, which depict the story of Joan of Arc, and the statue of the fearless warrior on Place du Martroi. See the Orléans tourism site for more.

Work on this masterpiece of Gothic art began in 1211 and took around 80 years to complete. It was the setting for the coronation of 25 kings of France, from Louis VIII in 1223 to Charles X in 1825, and was where Charles VII was crowned in 1429 in the presence of Joan of Arc. An equestrian statue of Joan stands outside the entrance on Place Cardinal-Luçon.

The tragic life and death of Édith Piaf

D-Day: Return to the beaches

Legacy of war in Verdun

Previous Article WIN! A copy of the book Savages: The Wedding
Next Article How to save money on your utility bills in France