Talk of the Tarn: spotlight on Castres 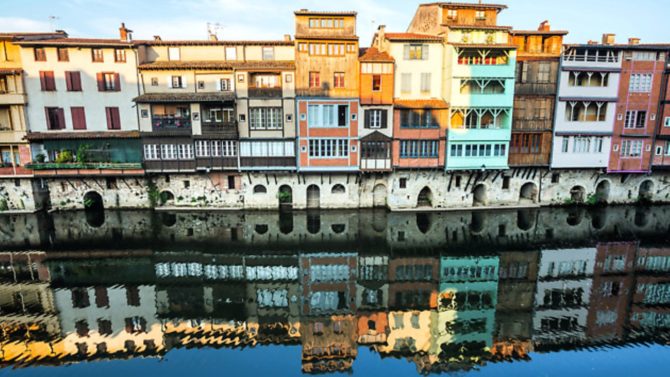 While many visitors to this part of Midi-Pyrénées head straight for the city of Albi or the Aveyron gorges, Frances Marcellin explores the historic town of Castres and shines the spotlight on the unsung hero of the department

Anyone who has discovered the joie de vivre of living in historic Castres will know one of France’s greatest leaders was born here in 1859, and the square at the town’s vibrant heart is named after him: Place Jean Jaurès.

To the French left what de Gaulle is to the French right, many say that Jaurès would be turning in his grave if he were to witness President François Hollande’s indecisiveness today. A man who dedicated his life to justice and helping the oppressed – particularly those of the miners in the Tarn’s Carmaux – he was Europe’s last hope for peace in 1914, until he was assassinated in Paris on 31 July. World War I started three days later.

A symbol of the French Republic values of Liberté, Égalité and Fraternité, he has been immortalised in the names of hundreds of streets, squares, boulevards, schools, hospitals, stations and even car parks, all over France. He is sewn into the fabric of the country, forever in its infrastructure, and no more so than in his birthplace of Castres.

An imposing presence in the form of a large marble statue created by Gabriel Pech on Place Jean Jaurès, he stands with his back to the River Agout. Historic symbols in their own right, the colourful, half-timbered maisons sur l’Agout along the river are one of Castres’ most famous landmarks and a reminder of its successful economic development through the textiles industry. These houses were occupied by drapers, weavers and dyers, and by the end of the 19th century Castres had become the largest town in Tarn, surpassing even Albi at that time, which today serves as the department’s capital.

Its successful past has provided a substantial foundation for contemporary Castres. The Place Jean Jaurès is where to go for al fresco dining and coffee culture, and where you can expect a lively atmosphere full of bonheur.

This is a town where you can build and enjoy family life with all the benefits of a southern French lifestyle and the conveniences of a modern society – including a busy and thriving business park, Le Causse, near the town’s brand new hospital.

FROM CHICAGO TO CASTRES

American John Russell has been living in Castres with his French wife, Alexandra Lapeyre, and their two children, Alex and Hannah, for the last 12 years. Previously, they were based in the heart of Chicago where John lived a pressurised lifestyle working as a trader on the stock market.

“Castres is Alexandra’s home town and after the attacks in New York and Washington we decided to move to a safer environment,” says John. “The first three years were particularly trying as I didn’t speak a word of French. Luckily Alexandra’s family has a hardware company and I could work there, but it was still a baptism of fire.”

They live about five minutes from the centre of town off the Route de Toulouse, in an old maison de maître. “I needed to renovate it, which allowed me to hone my skills,” he says, adding that the 1.2 acres of land give the children plenty of room to run around and “simply be kids”, which wasn’t the case in the heart of Chicago.

“I enjoy the small city atmosphere and the warmth of the people, as well as the surrounding countryside and safe environment for the kids,” he explains.

The town is also very active in bringing music, theatre and arts to the community, which suits John well as he is a songwriter at heart and has been in touring bands all his life. “I have written over 200 songs and recorded over 12 albums now, and I released a solo album in 2011 called Madness in France.”

John’s music can be heard at reverbnation.com/mmi, but he also performs blues rock classics in Castres every now and again with his cover band Ramirez. They also often play at the Quay Irish pub which is located in the town centre.

While many of France’s small towns have questionable nightlife options – and villages, although wonderful to live in, are usually lacking in night-time entertainment – Castres, with its Irish pub, wine bars, bistros and nightclubs (such as Pop Art), can support a younger generation growing up, as well as an older generation who are keen to maintain a social life.

France’s fifth biggest city, Toulouse, is just an hour away, so its airport and city offerings (such as Ikea, the larger DIY stores, university, trendy hangouts and fashionable boutiques) are more than accessible.

FROM MED TO MONTAGNE

As the winner of the French rugby union Top 14 championship in 2013, Castres scores highly with sports enthusiasts too. Phil Forgham, who spent most of his life in south-east England, moved to Tarn in 2006, and in his spare time is a trainer at the Castres Olympique École de Rugby.

In 2008, he set up the Agence 81 estate agency. “After working in sales and marketing for multinational companies, I had reached an age where the rat race wasn’t attractive anymore,” explains Phil, who says he chose Tarn because he had spent an exchange month at the university in Toulouse as a student.

“I fell in love with the Midi-Pyrénées, especially the south of Tarn as it is ideally situated for the mountains (the Montagne Noire and the Pyrénées), the lakes and the Mediterranean,” he says.

Phil explains that being located in or around Castres means that day trips to the Mediterranean coast at Montpellier, Sète, Béziers and Narbonne are easily possible. “In winter, skiers can leave Tarn for the Pyrénées or Aveyron in the morning, have a full day on the slopes and be home in time for an apéro and dinner. A visit to Andorra, with its wide selection of top-brand, duty-free consumer goods is also possible in a single day.”

As the area is still a well-kept secret, there isn’t a dominant English-speaking expat community. However, the Brits, Irish and Americans are the most common foreign buyers in Tarn, followed closely by the Dutch and the Scandinavians.

“Property prices tend to be much cheaper than in the other French ‘hotspots’ for foreign buyers, like the Dordogne or the Côte d’Azur,” Phil explains. “We also receive enquiries from countries such as Australia, Japan and China.”

For those who would rather live just outside the town in a countryside village, offering the tranquillity of rural France with all the conveniences of Castres just 20 minutes away, villages such as Lautrec, Roquecourbe, Brassac and Boissezon are some of the most popular.

BEST OF BOTH IN BOISSEZON

Claire and Ian Winterton have been living in Boissezon for the last four years, in a four-bedroom detached stone house that offers a stunning view of the village church. “About seven years ago we decided we wanted to move to France, so we found jobs with a French company that needed English-speaking journalists,” says Claire.

“At first we rented a brand new apartment on the outskirts of Castres, an easy commute to the office at Le Causse, but after a few years we decided we wanted to buy an old house in a more rural setting.” The couple viewed around 20 houses within a 30-minute drive from work and discovered the “pretty, friendly village of Boissezon”.

After having a baby boy last year, they both particularly appreciate the fact that Castres is child-friendly. “We feel very lucky to be bringing him up here – childcare is affordable and people seem very welcoming towards children in restaurants and public places,” explains Claire.

The location of the property was one of their top reasons for settling in the area as it means that they can be at the beach or up a mountain in a couple of hours, but it is the overall vibe of Castres that attracted them in the first place.

“The main square in Castres is lovely and a great place to enjoy a drink in the sun – there are also some lovely little boutiques, our favourite chocolate shop and lots of friendly coffee shops and restaurants,” she says. “We’re also rarely stuck in traffic and have the time to enjoy relaxing walks and get cosy in front of our log burner with a glass of wine.”

At €100,000, the house was a good investment opportunity for the couple. Their living space is upstairs to make the most of the view, with the bedrooms downstairs. The work they have done on the house includes installing a fitted kitchen, bathroom, spiral staircase and log burner, decorating throughout and repairing the façade. They also converted a 50m² barn into a gîte and have two acres of woods behind the house.

Converting the barn into a gîte has been a successful move for Ian and Claire. Priced at £250-£300 a week, they are almost fully booked from June to September with visitors leaving enthusiastic five-star reviews.

“We see it as an investment in the property for the long term, as much as a short-term earner,” says Claire. “I would recommend it, but if you have to renovate a building first, it’s important not to underestimate how much it will cost.”

Although the company they were working for closed last year, the ever-resourceful couple have set up a freelance journalism company and Ian has started a DJ business.

“I used to DJ just as a hobby, but then some friends asked me to do their wedding and as I got such a great reaction I’ve been doing it professionally ever since,” he says. “I’ve done gigs as far south as Narbonne, Bergerac to the west and Dordogne to the north. I also do parties, including an interesting one recently for a Frenchman’s 50th birthday party. He liked one of the songs so much he took his clothes off and danced in his pants,” he laughs.

Phil Forgham says that Tarn offers some of the most reasonable prices in France, from a weekend village house at €50,000 to a mid-priced villa with swimming pool at €200,000. “This kind of budget will get you a superb property,” he says, “which could be your very own maison de maître or château.”

Claire and Ian couldn’t agree more. “We fell in love with our house straight away,” Claire smiles. “We’ve got a lovely family home in a beautiful location that we couldn’t even begin to afford in England.”