Summer in the Alps 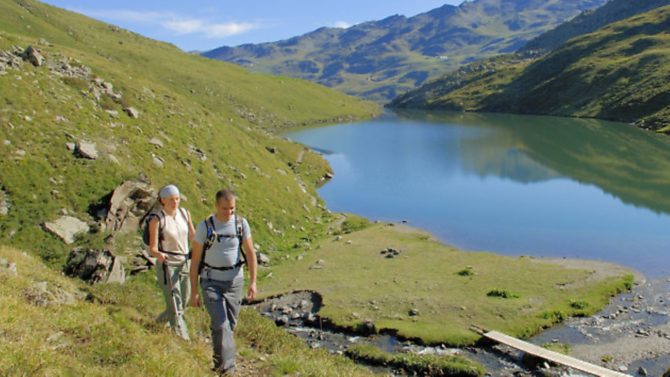 Within the popular skiing area of Les Trois Vallées, Belleville valley has 300km of pistes but anyone who visits will discover that there is so much more to these mountains than just the white stuff, appealing as that may be.

It was at the end of the Ice Age when populations started migrating into the valley. The discovery of archaeological sites at Fontaine-le-Puits, south of Moûtiers, indicate the presence of humans here from 2000 BC. In the following millennium the Belleville valley became more densely populated, confirmed by the discovery of an Iron Age cemetery near St-Jean-de-Belleville.

Following the Roman conquest Latin impregnated the local language. Belleville appears in the records for the first time in 1258, a combination of the words ‘villa’ in the sense of a country residence and ‘bella’ indicating the size, probably one single large domaine belonging to an important proprietor.

The toponymy of Villard, meaning a villa of lesser importance, indicates the later dismembering of the large villa. This division explains the numerous ‘Villards’ in the valley and the creation of the various hamlets. Villard was sometimes followed by the name of the initial owner of the small villa, such as Villaranger, Villarabout, Villarencel, Villarbon.

Over the following centuries the population increased, land was cleared for crops and livestock and permanent installations appeared at altitude. Come the 20th century industrial civilisation invaded plains and deep valleys bringing wealth, modern techniques and modern pleasures – and the beginning of a demographic decline.

By the 1950s Saint-Martin-de-Belleville had lost around two-thirds of its population which fell from 3,000 to 800. What had become a seasonal winter emigration became a definite exodus as the Bellevillois moved away to the large cities.

In the early 1980s the mairie decided to develop St-Martin’s tourism potential while safeguarding the village’s authenticity and charm, so in 1982 the village was connected up to the ski domain of Les Trois Vallées.

Head for the hills and you will almost certainly walk past one of the 250 montagnettes in the vast high-altitude meadows. These small, stone, lauze-roofed houses provided simple accommodation to families during the summer months when they took their herds up to graze on Alpine pastures.

Today most of these montagnettes lie in ruins. However some owners are keen to preserve this quintessential element of Alpine heritage and in a period of 20 years over a hundred have been restored.

Obviously, the winter season is the most important in these parts and that is what dictates property prices, says Olivier Hudry at the Agences des Alpes in St-Martin.

According to his brief summary of the Alpine year in the Belleville valley, the winter season runs roughly from the beginning of December to the end of April. In the off-season months of May and June there is always more life in the villages than in the ski resorts because people live there on a more permanent basis.

Although some shops are open in St-Martin activities are reduced in springtime, he says. Pools and other attractions are closed – it is really a time to take advantage of the stunning scenery and head up into the hills.

Come July and August the summer season swings into action. The tourist office organises a raft of activities for all age groups to help visitors make the most of the mountains.

The rhythm slows down again come the autumn months although the weather can be lovely in September and October. Most of the trees in the valley are deciduous, including birch, so October often offers rather surprising and unusual colours for the mountain. You also find mélèzes here, deciduous pines only growing around 2,000m, splashing the hillsides with gold and auburn colours.

In November the météo changes to winter mode and preparations start for the winter season. The commune of St-Martin-de-Belleville includes the two high-altitude resorts of Les Menuires and Val-Thorens which from mid-November offer skiers the possibility to come and carve out les premières traces.

The commune is very spread out descending north down the valley from Val-Thorens, past Saint-Martin to the various hamlets on the eastern slopes including St-Laurent-de-la-Côte and La Côte-Derrière.

People buy second homes in these villages where you are at lower altitude, 1,000-1,200m, and 10-15km from the ski lifts. Move up the valley and you come to the villages of Villaranger, and Villarabout, a short walk from St-Martin, and further along Praranger, on the way to Les Menuires. Here we are much more at the heart of the resorts and most activities, shops and facilities are centred in Les Menuires, Val-Thorens or St-Martin.

Regardless of the charms of summer in the mountains, what gives the tone in terms of property prices is the winter season. Folk may well use their property out of season and in the summer but what regulates the property market is the skiing. People want to know how far houses are from the ski lifts. If you do not want to use your car you need to be in St-Martin or Le Bettaix further up the valley which is linked by a ski lift to the slopes.

There is the inner circle of villages closest to St-Martin, like Villarabout, and an outer one which includes appealing places like Les Frênes which are not served by the navette (ski shuttle). Here you can buy a stone barn for renovation for €90,000 (Agence des Alpes).

If you want real isolation, look for a renovated montagnette, or, if you are a glutton for punishment, look for one that isn’t. Depending on its state you will pay around €1,500/m². There is one for sale for €87,500 at Les Allemands at an altitude of 2,000m.

From an investment viewpoint the money is made in winter. Renting rooms in the summer is really not expensive. People often think that because winter accommodation is expensive it is the same in summer, but this is not the case. In St-Martin a small comfortable studio for four people will cost you about €290-300 per week in August. The same studio in the height of the winter season – over New Year or the French February school holidays, say – will cost you €900 per week.

By now I hope you are planning a non-winter trip to the French Alps to check out properties. Should you decide to bring along friends and family for a second opinion, a large well-equipped chalet apartment sleeping 12 will set you back all of €700-€800 for the week, compared with €4,000 a week in winter.

According to studies, summer visitors to these parts travel around much more once they are here than in winter. Skiers come to ski but other visitors take the time to enjoy the wealth of activities on offer.

They visit the Parc National de la Vanoise, Pralognan-la-Vanoise, they head to Chamonix for the day, or they go to see Lac d’Annecy. Because visitors are happy to hop in the car, rental properties in the more isolated villages are not penalised; they may be just 5-10% lower depending on the time of year, or indeed the same as in St-Martin.

So, yes, property prices are based on the expensive skiing season but once you have bought your pied-à-terre in the Belleville valley you can enjoy it throughout the year. In fact if you are not particularly keen on the white stuff you could rent it out for top dollar and enjoy it yourself in the spring, summer and autumn.

Estate agent Heather Byrne has lived in the valley for 10 years and markets property in and around St-Martin-de-Belleville. She says that village properties still represent fantastic value and some have dropped considerably in price although she does not think prices will go down much further.

“I think we’ve reached about the limit so it’s really a good time to buy over the summer in preparation for the winter,” she says. She thinks prices might then start to pick up once the Brits are back in force. She also has a lot of interest from Holland and Germany.

“Around ski resorts there are always going to be people who can afford to buy so it’s a very buoyant market,” she explains.

As an example she quotes a pretty three-bed chalet in St-Martin with a little garden. It recently sold for €580,000 to a British family for a year-round holiday home. Buyers do rent out their properties, especially in St-Martin, during the skiing months. But there are good rental opportunities in the villages because they do represent a cheaper option.

Just outside St-Martin in Villarabout she is in the process of selling a five-bedroom chalet for around €700,000 with a wonderful view, garage and garden, again to British buyers. Other popular villages worth considering include St-Marcel and Les Granges, both south of St-Martin going towards Les Menuires and Val-Thorens.

If you are a walker or mountain biker, you can certainly enjoy this pretty Alpine valley in the summer without a car, using the navettes and various lifts which operate in July and August. The train stops at Moûtiers, Salins and Brides-les-Bains and a bus will take you to St-Martin. The nearest airports are Chambéry, Geneva, Grenoble and Lyon.

If mountain biking is more your bag, the Compagnie des Guides de la Vallée des Belleville has completed the VTT (véhicule tout terrain) network with the creation of two new tracks. One heads off from the arrival point of the St-Martin cable car, the other starts from the car park at the Cime de Caron mountain and ends at Les Menuires.

I do hope this gentle journey through the Belleville valley has shown you that Alpine living is not just about winter snow.

As Monsieur Hudry so succinctly puts it, “Nature is always open and available, whatever the time or the season.”