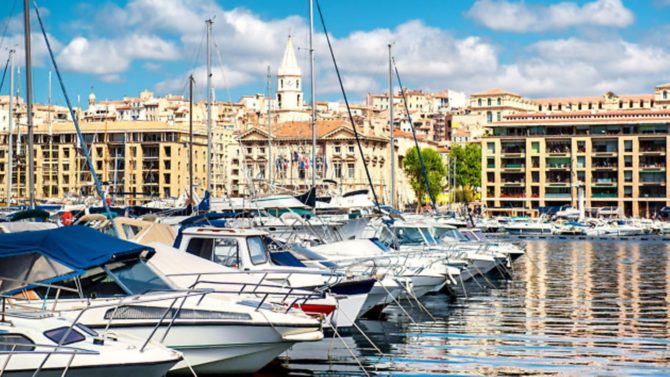 After two decades of renewal, Provence’s coastal capital has become the cultural city of the future, as Frances Marcellin discovers

Some refer to Marseille as ‘earthy’, others call it an ‘industrial brute’ and there are many who simply associate France’s second largest city and ‘maritime workhorse’ with drug crime and violence.

But today, just a quick walk through the pulsing heart of this vibrant city would quickly quash negative assumptions born through hyperbolic press articles and old school hearsay. For Marseille has undergone a transformation that has resulted in an attractive, multicultural, sustainable city of the future that is economically thriving, socially magnetic and architecturally celebrated.

In fact, some have gone so far as to suggest it has transformed from an ugly duckling into a swan – a story far more relevant for describing Marseille’s evolution, and the Marseille of today and tomorrow.

This is clear to see when you descend the steps of one of Marseille’s oldest and most beautiful sights, Notre Dame de la Garde, and take in the breathtaking view of the city. The stunning ships in the Vieux Port, the sparkling sea to the horizon, busy beaches, uniquely styled buildings and young, sophisticated individuals enjoying the gastronomy, nightlife and culture. It is evident in a flash that Marseille is changing.

Marseille is found on the sun-drenched coastline of the Bouches-du-Rhône department in the Provence-Alpes-Côte d’Azur region and enjoys over 300 days of sunshine each year. It has a population of around 800,000, is a major university town with approximately 450,000 students and welcomes 10 million tourists annually.

With 14 ports spread over nearly 60km of coastline, Marseille is the largest yachting centre in France, and it has excellent transport links. It is home to the third most important airport in France (and the fastest-growing with over 50% growth in the last 10 years) and has a TGV line that connects the city to Paris in just three hours.

“Although I’ve only been here for three years I can see the city transforming in front of my eyes,” says Chantel Fouche, an English language consultant living in the 8th arrondissement of Marseille by the Rond-point du Prado metro station. Originally from South Africa, Chantel came to Marseille with her 12-year-old son so she could be with her French husband, a construction worker in the city.

They bought a three-bedroom, 117m², two-bathroom property with two balconies and a study for €320,000 back in 2011 and the family is amazed by the aesthetic improvement in the street over the last few years.

“It has been completely transformed and looks really upmarket now; they’ve planted many trees and have put in a cycling area,” Chantel says. “I come from a commercial background and if we’re talking about investing, I would say buy in an ‘ugly duckling’ area of Marseille and before long it will become beautiful – buyers should be prepared to take a risk as neighbourhoods are transforming all the time.”

The major driver behind Marseille’s extensive facelift was born through Euroméditerranée – the largest urban renewal project in Europe with a budget of around €7 billion. Launched in 1995 by national government and local organisations when Robert Vigouroux was mayor, it focuses on redeveloping a 480-hectare area in Marseille and upgrading it to become one of Europe’s major cities.

In 2013 Marseille became a European City of Culture, along with Kosice in Slovakia. The idea of having European Cities of Culture was created by politicians Mélina Mercouri and Jack Lang to celebrate the key role played by cities in European culture. Founded in 600BC by Greeks from Asia Minor, with the name Massalia, Marseille has long earned itself a respectful place in Mediterranean history.

This has translated into over 60 refurbishment projects from leading architects, including cultural icons such as the MuCEM (Museum of Civilisations from Europe and the Mediterranean) and the esplanade of the once-abandoned J4 pier, which is now home to one of Marseille’s most impressive sights: architect Stefano Boeri’s Villa Méditerranée.

A technology project, ITER, benefiting from €10 billion investment, has also made the city ‘Capital of Mobile Valley’ and helped to transform the old tobacco factories of the Belle-de-Mai area into a leading hub for digital, multimedia and audio-visual industries.

La Joliette, positioned between the port and downtown Marseille’s 2nd arrondissement, is another area that has been completely transformed. With new housing, more than 800 companies, thousands of employees and new schools and services, this is now one of the hottest places to work and live in Marseille. The old docks buildings have been renovated and the Silo, a new concert arena, injects cutting-edge culture, music, entertainment and comedy into the area.

“This is the hub of the Euromed area, which has been very well impacted by the investment,” says Julien Mercier, a bilingual estate agent for Propriété Charm Provence, which specialises in finding character properties for buyers in the region.

A new shopping mall called Les Terrasses du Port has also just opened after 10 years in the making on a budget of half a billion euros. It will be home to nearly 200 stores (all luxury brands are represented) and six restaurants overlooking the sea, and is the first major French venture from UK retail property giant Hammerson’s. It will also open seven days a week – something that any expat in France will surely say is bordering on unbelievable.

“Another renovation project that brought life to Marseille is the Cours Julien restoration which transformed the neighbourhood into a lively area for restaurant and café goers,” says François-Xavier de Vial, director of luxury buyer’s agent Home Hunts.

“It’s a place for parents to take their kids as there are a lot of facilities for them,” he adds, before going on to explain that one of the biggest projects has been the renovation of the Vieux Port including the new paved area of Quai des Belges.

“In the old Panier district, built in 1753, the old Hotel Dieu, which used to be a hospital, was turned into a five-star hotel run by the Intercontinental group,” says François. “The addition of the hotel brings a new beauty to the Vieux Port at night.”

When it comes to property, most people investing in Marseille are there for the work –retirees usually settle outside of the city in places such as Cassis and the Côte Bleue, a pretty coastline running from Martigues to the L’Estaque district.

It is a highly cosmopolitan city and foreigners who invest are often Europeans who champion the city. Armenian communities have been there since the 20s and there are also many Italians, South Americans and Egyptians. There is also a thriving British expat community with organisations such as the Marseille Anglo-American business network (MAABN) and the Anglo-American Group of Provence for support.

The local community are welcoming to foreigners, says Chantel. “When you speak French they will speak back to you, but then they will try to speak in English,” she says, adding that another useful resource for expats is Casnav, which allowed her son to transfer from the international school and find a good public school that accelerated his integration and language abilities. “Two years later and he can now speak and write French beautifully,” she says.

As for where people want to buy or settle, La Joliette is popular, as are seafront locations and the 7th and 8th neighbourhoods, says Julien. Another popular place is the St-Barnabé area in the 12th arrondissement on Marseille’s north-east side, as well as the district of Endoume.

Less popular among expats are the northern neighbourhoods of Marseille which are more affected by crime.

For those seeking a more prime market location, the Corniche (from districts Roucas Blanc to Bompard) is one of the most sought after due to its proximity to the sea.

“The Avenue du Prado is also very exclusive with its large sidewalks and Parc Borély, where you are 2km from the sea and a 20-minute walk from the beach,” says François, adding that around the Vieux Port, those who like the nightlife can find amazing lofts with views of the port.

Boulevard Longchamp, a Haussmannian avenue leading to Parc Longchamp, which François describes as one of the “wonders of the city”, is also highly coveted, and Pointe Rouge is the place to be for people who like boating as it has a major yachting harbour and is close to the beaches.

In terms of what people can buy, someone with a budget of €200,000 could find a T3 (three rooms, excluding bathrooms and toilets) with two bedrooms and 90m² space. A €400,000 budget could attain a 130m² T4 apartment with three bedrooms in the 1st and 2nd arrondissements of Marseille, and €500,000 could buy a four-bedroom, 107m² apartment in the 7th arrondissement with a sea view and terrace.

“International buyers tend to seek large villas with sea views, although they are very difficult to find,” explains François. “They are also keen to buy apartments or pieds-à-terre around the Vieux Port, as a secondary home or to rent out seasonally.” Those wishing to relocate permanently opt for the beaux quartiers, like the areas around Avenue du Prado and Boulevard Périer, which is where most of the foreign consulates are located.

While Marseille offers a big city lifestyle on the sparkling Mediterranean coastline, it is still underrated when compared with French Riviera cities such as Nice. Combining this with the general property price drops across France that average 2.5%, Marseille can currently offer buyers many interesting real estate investment opportunities. Its masterful fusion of old and new, along with the believable promise that it will become a leading city of our future, has put Marseille firmly back on the real estate map.

And there’s also the particular ambiance that only Marseillian residents can talk about. “Marseille is a unique place; it is so cosmopolitan, a city that belongs to the world and not to France, like New York,” says Julien. “There is a special spirit that you will find here and nowhere else.”