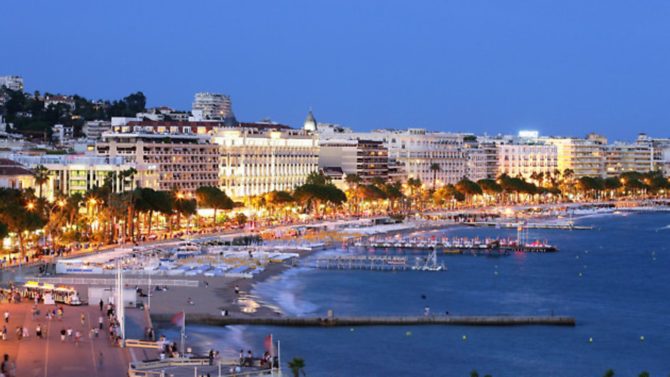 Affluent, sundrenched and world-renowned, the Côte d’Azur is one of France’s undeniable hotspots, and the place to breathe, hear, taste, see – and be seen. Although it stretches for 118 miles between Toulon and Ventimiglia in northern Italy, just 20 separate Nice and Cannes, two of the coastlines’s most popular destinations.

Both are playgrounds for the rich and famous and offer high-quality lifestyles, but there are some important differences: Nice is France’s fifth largest city and has a rich, Italian-influenced history, while Cannes is a smaller, more modern and glamorous resort. Whichever version of Riviera living appeals, these two towns are surprisingly accessible and affordable if you do your homework.

The main attractions of Nice and Cannes

Nice and Cannes both boast a seafront to be proud of: in Nice’s case, it’s the Promenade des Anglais. Wander along here and enjoy gazing out into the Baie des Anges and the impossibly blue water after which the coastline is named.

If you prefer sand between your toes, head for Cannes’ Croisette. This swanky arc lined with umbrella pines extends for two kilometres – designer boutiques rub shoulders with world-famous hotels such as the Carlton, which plays host to international stars during the annual film festival.

Lovers of art and architecture may feel despondent roaming Cannes’ modern boulevards, but for the big-name shopaholic, they are a paradise. The town is not entirely devoid of old-world charm – the winding streets of Le Suquet peak at the fascinating Musée de la Castre – but climbing the steps of its 12th-century tower is, really, less a historical journey than a leg-up to a better view of the waterborne wealth anchored in port. Nice’s answer to a vantage point is high up on La Colline du Château, from where the tight terracotta labyrinth of the Old Town gives way to urban sprawl beyond.

Evidence of the town’s Italian history is on the Old Town’s street signs, as well as in the eating. Local cuisine is rich and flavoursome and pizza and pasta are enormously popular, but visitors should also try Niçoise speciality socca, a pancake made from chickpea flour and olive oil.

Also in Vieux Nice is Place Masséna, whose red ochre buildings with arcades and balconies scream Mediterranean splendour, and at the market in Cours Saleya, stall upon stall of gleaming produce competes for your attention. Art buffs are spoilt for choice in Nice: to the north, residential district Cimiez is home to Gallo-Roman ruins and the Musée Matisse, and the Musée d’Art Moderne et d’Art Contemporain is closer to town.

Day trips and nightlife on the Riviera

Day excursions are a speciality in both Nice and Cannes, but they don’t have to be something you do purely as a visitor. The temptation to board a train at Nice-Ville station and shuttle along to Monte Carlo in just 20 minutes is ever-present, and why not? Lunch at Café de Paris in Place du Casino is well worth it, even if you aren’t the gambling type.

Alternatively, from the old port of Cannes, hourly boats depart to the stunning and unmissable Îles de Lérins. All the vogue and opulence of Cannes dissolves into birdsong, dust paths and vineyards, shaded by creaking pines and edged with rocky coves – the ultimate haven of peace.

Naturally, both towns are as much alive at night as during daylight hours. Nice’s only champagne bar, L’Effervescence, is located in the Old Town, by far the best and most atmospheric area for after-dark activities. Up the coast in Cannes, the best restaurants can be pricier but Mantel in Le Suquet is an affordable gem. If you have energy to spare after dinner, the bars and clubs around Rue Commandant André just off the Croisette will drain it nicely.

The property market in Nice and Cannes

So, what of the property market? It’s true that property prices can be eye-watering in these two towns: according to Notaires de France figures, apartments in central Nice sell for an average of between €5,050 and €6,420/m2, compared with the national average of €3,510/m2. In the centre of Cannes, the upper limit extends to as much as €7,570/m2. But in terms of square meterage, you don’t need to splash out when there is so much to be done outside your apartment doors in both towns.

Betty Bloom of SPA Properties ([email protected]) considers buying in Cannes to be a solid investment. “The film festival and other annual events attract a vast number of foreign tourists, so the seasonal rental income even from a small, two¬-room apartment would pay for its maintenance and the local taxes,” she explains.

Nice, on the other hand, has a thriving year-round personality, and arguably offers more bona fide French appeal. “Buying in Nice means you are living in ‘real France’,” says Betty. “You can buy your flowers at the market in Cours Saleya and eat a bouillabaisse at an authentic waterside restaurant.” If central town living doesn’t appeal or space is an issue, there are attractive villas and apartments to be had on the outskirts of both towns.

There’s no denying that buying property in Nice or Cannes requires a heftier initial outlay than in many other French seaside towns, but if you’re prepared to rent out, it can be a shrewd investment. Whichever rival you side with, you will own a piece of paradise in an area of enduring popularity.

Transport and getting around the Riviera

Buses and trams are extremely efficient and cost-effective: any journey on any line costs just €1, and Nice airport is of course a pick-up and drop-off point. A ‘Ticket Azur’ covers the whole Alpes-Maritimes department – a one-day pass is €5, and seven days cost €15. Trains run swiftly between Cannes and Italy’s Ventimiglia, usually double-decker and offering a spectacular view of the coastline. Nice-Côte d’Azur airport is two hours’ flying time from London, and serves the whole coastline.

Previous Article Running a hotel in Burgundy
Next Article Many happy returns: the tax advantages of leaseback