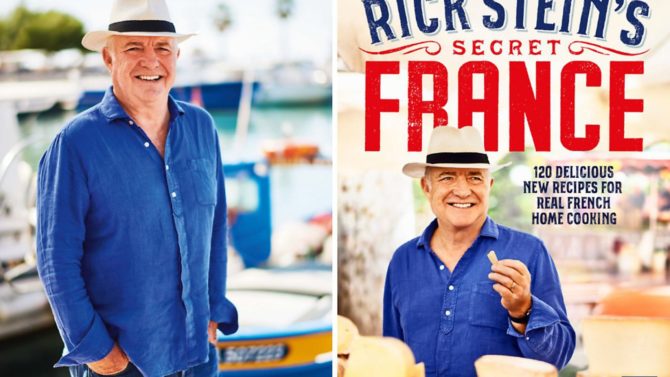 The English chef and restaurateur travels from Normandy to Provence searching for France’s best-kept gastronomic secrets, and has published a new recipe book to accompany his new series Rick Stein’s Secret France

English chef and restaurateur Rick Stein first set foot in France over 50 years ago and has long been passionate about French food and cooking. He travelled around France on a barge for his French Odyssey series in 2005, and his latest series Secret France sees him embarking on a road trip around the country he loves, exploring towns and villages off the beaten track from Normandy all the way to Provence.

On the lookout for things the British could learn from the French to enhance their lives, he eats in local restaurants and visits local markets along the way, picking up inspiration as he goes and uncovering hidden gems.

“My friends tell me that France is no longer the place for good food. They say the towns and villages that have been touched by tourism are now all the same. But I guess I’m a bit of a romantic and I’d like to prove them wrong,” Rick Stein says of his new series. “So I’m going to get off the beaten track and take to the backroads of France – meandering the length and breadth of a hopefully less discovered France that still cherishes the best of its past and is creating modern exciting dishes that are still unmistakably French. It’s a journey I know a lot of my viewers would like to take and I hope won’t be disappointed.”

In episode one of the six-part series, which begins on Tuesday 5th November at 9pm on BBC Two, Rick’s journey begins in the fishing port of Dieppe on the Normandy coast with turbot straight off the boats, followed by foraging for sea herbs along the Baie de Somme which inspires him to cook an indulgent seafood gratin.

Subsequent episodes see him exploring the regions of Alsace and Jura, where he indulges in his favourite French dish, choucroute garni, and comté, his favourite French cheese, and Burgundy where he finds steak-frites that almost match the ideal he remembers from a weekend in Paris in 1970.

The accompanying recipe book Rick Stein’s Secret France was published on 31 October and contains ‘120 delicious new recipes for real French home cooking’, many of which will be perfect for autumn and winter evenings, such as a chicken and fig terrine that was inspired by a meal at a restaurant in Marseille. Meanwhile the beef and pork meatballs in a tomato and piment d’Espelette sauce came from a market stall in the Catalan south in Occitanie, and for dessert there’s a tarte flambée with apples that combines the usually savoury tarte flambée with a sweet tarte fine (apple tart), finished with a British twist in the form of a crumble topping.

The accompanying recipe book Rick Stein’s Secret France is out now and is priced at £26.

QUIZ: Can you match these French dishes to the area they’re traditionally associated with?

Previous Article Everything you need to know about French notaire’s fees
Next Article How to make money from your second home in France…and 7 other things we learnt in the November issue of French Property News!