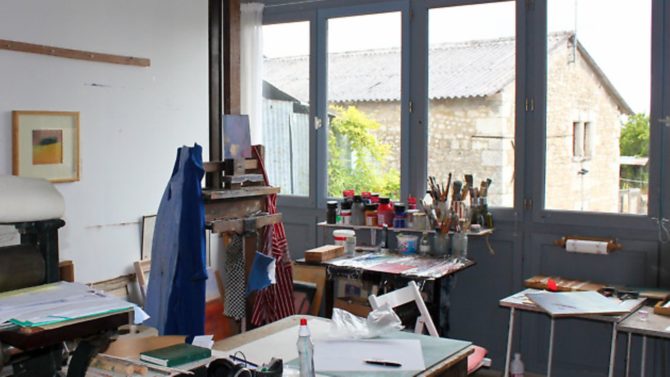 This would be perfect for my studio,” exclaimed artist Jean Duncan when she climbed a rickety ladder into the hayloft of an ancienne fermette in the Indre-et-Loire department of France in 2002.

No matter that the property had only three habitable rooms on the ground floor and some very dilapidated outbuildings. A vision had been born and the realisation of a dream was about to commence.

In 1985, Jean and her husband Roderick, a retired senior inspector of art and design in Northern Ireland, had been invited to organise a painting and printmaking course in the small town of Martel in the Lot department. This led to a happy relationship over several years with the inhabitants of the town as well as the many students on the courses. Five years later they bought a house in the town, and spent the next 12 years living in both France and Northern Ireland.

Travelling takes its toll, however, and in 2002 they decided to look for something a bit nearer to the Channel ports. Friends had given them the name of a good bed and breakfast in Richelieu (of Cardinal Richelieu fame and en route to Martel), and on further investigation they realised this area had much of what they were looking for, including the desired wide open spaces as well as beautiful poplar trees, historical interest and not too much in the way of heavy tourism.

A buyer was easily found for their Martel house, and a further visit to Richelieu found Jean and Roderick up in the hayloft of the old farmhouse in Faye-la-Vineuse.

That initial visit showed plenty of potential: a south-facing piece of land in front of the house; old garage with pressoir (wine-pressing shed); pigsty and outhouses, all of which were convertible; land at the back where the pigs used to roam for a manageable potager; three haylofts, all able to be converted into a spacious upper floor; and a huge open space for the all-important north-facing art studio.

Inside there was a light and airy living room with doors leading off it to the shower room, kitchen and bedroom.

Tucked away behind the 9th-century village church, and a few minutes’ walk from the essential boulangerie, this farmhouse has views over the open countryside and had been lived in by an elderly widow who had brought up six children. It had a wood-burning stove which powered the central-heating system and the couple bought it on the spot, moving in just three months later.

The following year, work started in earnest with the main focus being on the creation of a first floor, as well as on the designing of the beautiful studio, master bedroom with en-suite, family bathroom and two guest bedrooms.

The kitchen was opened up into the original hallway, where a solid oak staircase now leads to the new upstairs space. Each bedroom was given a window on the north-facing wall, to provide all the rooms with the best views of the hills and fields on that side.

The old pigsty has become a very useful workshop, with the land at the back being encased by a new stone wall built in the traditional manner of the region, and housing a potager. Roderick in particular takes great pleasure in having this on the doorstep, and makes regular use of the produce they grow to create delicious meals in the lovely kitchen for himself and Jane.

“I simply love being able to pop outside the kitchen door and pick my fresh lettuce, rocket, tomatoes and peppers for our lunch,” he says.

The dilapidated barn and pressoir has become a very useful garage and storage space, while the rest of the outhouses have been converted into the grapevine-sheltered dining area, and space for extra freezers and fridges – which comes in very handy for when their many children and grandchildren come to visit on their holidays.

“We have loved creating the garden as much as any of the works of art I have done in the studio,” says Jean. “The outside space is now a haven for flowers, birdlife, two grapevines and three al fresco eating areas.”

Since Jean and Roderick have moved to Faye-la-Vineuse, a successful and excellent restaurant has opened a few minutes’ walk away in the medieval village. Along with the existing boulangerie, post office and grocery store, and the fact that it is only seven kilometres from Richelieu itself, Faye-la-Vineuse has become known for its good local food as well as its historic interest.

Having realised their dream over the past 10 years, the couple have now decided they want to live nearer to the grandchildren in York. As a result the house is now on the market, for sale at €300,000, and the family are prepared to sell the property part-furnished. Items including the outside table tennis, garden tables and chairs, sun shades and various tools and garden implements are available to buy should a new owner wish to purchase them along with the house.

It’s now time for someone else’s dream to start in Indre-et-Loire.