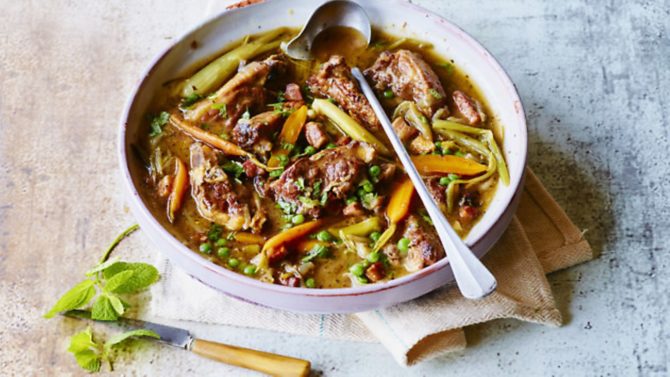 Jane Grigson in her classic vegetable tome – Jane Grigson’s Vegetable Book– suggests that this dish was rechristened as a tribute to France and her allies, following the defeat of the Ottoman Armada at the battle of Navarino in 1827, which ultimately led to Greek independence. She surmises that perhaps the similarity of the names for both the battle and the vegetable would have inspired this change in name. Whatever the reason, it remains today.

Mutton would have been used up until about the early 20th century, when domestic sheep began to be bred to grow and fatten up more quickly, and from then on lamb was more commonly used. Mutton has a richer flavour and deeper colour than lamb, and when you can find it, it can be used instead; it is likely to be cheaper than lamb.

Though French lamb is expensive at the moment, one of the great bonuses of this dish is that it uses best end of neck chops (referred to as ‘collet’ in French), which is one of the less expensive cuts, largely because it needs a longer cooking time.

The chops have a decent amount of fat too, which will give the dish a lovely rich flavour. If you make the stew a day ahead, not only will this intensify the flavour, but you can also remove the thick layer of fat that will set on the surface of the dish.

You can use any combination of vegetables you like. I tend to check out the weekly market and buy whatever is in abundance, and this changes according to the time of year.

Although this recipe is intended for springtime, the stew is just as good all year round, and the flavour will be determined by whatever vegetables are in season at any given time. In spring, baby new potatoes are the perfect accompaniment; in winter I prefer a creamy mash. Either is delicious.

’Navarin’ is the French word for a ragout made with mutton or lamb and vegetables. When made in spring as it often is, it becomes ‘navarin printanier’ (from ‘printemps’, the French word for ‘spring’), with the inclusion of the best of the season’s vegetables such as peas, carrots, leeks and baby turnips. It is perhaps the addition of turnips (‘navets’ in French), that may explain the origin of the name navarin, although sources differ on exactly why and how the name came about.

• 500g baby vegetables, such as baby turnips, leeks, carrots and fennel, trimmed and halved if necessary

1. Preheat the oven to 180°C/160°C fan. Place the lamb chops in a large bowl, add the herbes de Provence,flour and 1tsp each salt and pepper and toss well to coat the chops.

3. Add the shallots and garlic to the pan and fry gently over a low heat for 5 minutes, return the lamb and lardons to the pan and add the wine, stock and rosemary sprigs. Bring to the boil and transfer to the oven. Cook for 1.5 hours, stir in the baby vegetables, return to the oven and cook for a further 30 minutes. Stir in the peas and cook for a final 15 minutes. Scatter over the mint and serve with some baby new potatoes, if desired.

Previous Article Ian Moore: the perils of the French language
Next Article An expat family living in Annecy