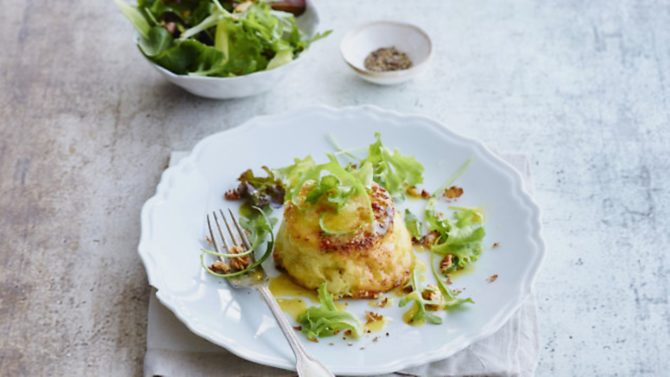 Unlike its once-baked cousin, the best thing about soufflé au fromage cuit deux fois (twice-baked) is that you don’t need to worry about it sinking. This makes the light, cloud-like dish a breeze for dinner parties, as the first cooking can be done a day ahead, and the soufflés can then be finished off just before serving, as they bounce right back up on the second cooking.

The word ‘soufflé’ comes from the French verb ‘souffler’, which means ‘to blow’ or ‘to puff up’, and although this particular soufflé is left to cool, it is made in exactly the same way as if was to be served straight from the oven. It begins with a roux sauce where butter and flour, and then milk are cooked together until thickened. The egg yolks, blue cheese and Parmesan are then stirred in, and finally, whisked egg whites are added in order to lighten the mixture.

You can use any type of cheese to flavour the soufflé, and this varies seasonally as well as regionally in France. I have opted for a combination of blue cheese and grated Parmesan, as I find this gives the finished soufflé a lovely rich but not overtly blue cheese flavour. I also prefer to use a less robust blue cheese such as Saint Agur. However, if you are a true blue cheese aficionado, then by all means substitute with Roquefort; I’ll leave it up to you.

Often, a twice-baked soufflé is served covered with cream and extra cheese, especially in the winter months when we hanker for comfort food. I prefer it as it is here, a lighter, more summery dish served with a salad of mixed leaves, toasted walnuts and a slightly sweetened mustard and cider vinegar dressing. This balances the richness of the soufflé perfectly. It is ideal as a starter course, or it could just as easily be served as a light lunch with some delicious crusty bread.

Despite the ease of this recipe and there being nothing to worry about in the sunken soufflé department, I’d still recommend a couple of tips when cooking this and other soufflés. Make sure you grease the insides of the ramekins well (and in this case, dust evenly with Parmesan too). Once the mixture is in the ramekins, run a knife around the edge before the soufflés go in the oven, as this will ensure they rise evenly. Finally, don’t be tempted to open the oven before the designated time, for a lighter end result.

• 60g butter, plus extra for greasing

1. Preheat the oven to 180°C/160°C fan. Lightly grease six 200ml ramekins; dust inside with 2 tbsp of the grated Parmesan and transfer to a deep baking tin.

2. Melt the butter in a small saucepan, then add the flour, mustard, salt and pepper. Stir well until the mixture comes together – this will almost be immediate – and beat over a low heat for one minute.

3. Gradually pour in the milk, whisking constantly until the mixture comes to the boil. Simmer very gently for two minutes, stirring until thickened. Cool for five minutes, then beat in the egg yolks one at a time. Stir in the blue cheese and half the remaining Parmesan, and transfer to a large bowl.

4. In a clean bowl, whisk the egg whites until soft peaks form. Fold a spoonful into the cheese mixture to loosen slightly, and then fold in the remaining whites until evenly combined. Spoon into the prepared ramekins in the baking tin, and run a knife around the edges.

5. Pour boiling water into the baking tin to come half way up the sides of the ramekins. Transfer to the oven and bake for 20 minutes until risen and golden brown. Remove the soufflés from the baking tin and leave to cool.

6. Run a small palette knife around the edges of the ramekins and invert the soufflés into a greased baking dish. Scatter over the remaining Parmesan and bake for 15 minutes until golden. Meanwhile, whisk the dressing ingredients together. Arrange the soufflés, salad leaves and walnuts on serving plates and drizzle over the dressing. Serve at once.