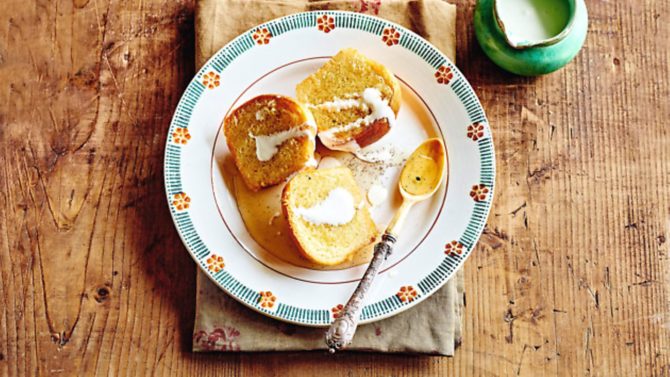 It is, however, now more or less agreed by food historians that this decadent dessert was invented in France in the 18th century, by French pastry chef Nicolas Stohrer, for the exiled King of Poland, Stanislaw I. The king, living in Alsace-Lorraine, was in France for the marriage of his daughter to Louis XV and asked Nicolas to soak a rather dry kugelhopf cake (an Eastern European yeast cake baked in a tall dome-shaped tin) in alcohol to render it more palatable. It is known for certain that Nicolas Stohrer made and sold what we know today as a baba au rhum when he opened his long running and world-famous pâtisserie in Paris in 1730.

Unlike the original recipe, today’s babas are purposefully dry when cooked so that they soak up as much of the delicious rum syrup as possible. This recipe produces a cake with a wonderfully moist airy texture and lovely rich boozy flavour. Babas are traditionally baked in individual tins, either dome-shaped or in individual ring moulds.

Babas always bring a smile to my face. They so epitomise 1970s Britain, when French cuisine was de rigueur and bistros were hugely popular. Perhaps it’s nostalgia for being in London at the time and discovering this exotic dish that creates such fond memories, but most likely it’s for the way in which they were served back then, with a piped swirl of cream and that ubiquitous glacé cherry perched on top. Fortunately, if you go to any number of bistros in France today, this timeless classic is served just the same way. They may be kitsch, but they’re just delicious, so who cares?

For this recipe, you’ll need either a deep 12-hole muffin tin, or 12 x 80ml capacity individual metal pudding tins. Note also that dried active yeast is available from some larger supermarkets or health food stores, and shouldn’t be confused with fast-acting yeast.

• a pinch of salt

1. In a bowl, combine the yeast, 1 tbsp of the sugar, warmed milk and 4 tbsp of the flour and stir well. Leave in a warm place for 10 minutes until frothy.

2. Sift the remaining sugar, flour and salt into a food mixer with dough hook attachment. Add the yeast mixture and the eggs and beat at medium speed until the dough comes together. Beat in the butter a little at a time until sticky.

3. Turn out onto a clean surface, shape into a ball and place in an oiled bowl. Cover with cling film and leave to rise in a warm place for 1-2 hours until doubled in size.

4. Preheat the oven to 190°C/170°C fan. Lightly oil a deep, 12-hole muffin tin. Divide the dough into 12 and shape each into a ball. Press each one into the prepared tin. Cover and leave to rise for 30 minutes. Place in the oven and bake for 20 minutes until risen and golden.

5. Meanwhile, make the syrup. Place the sugar and water in a saucepan and heat gently, stirring until the sugar dissolves. Bring to the boil and simmer for 5 minutes. Remove the pan from the heat and stir in half the rum. Pour the syrup over the buns and leave to steep for 15 minutes. Serve with the extra rum and a drizzle of cream.

Previous Article What does a eurozone recovery mean for your French property purchase?
Next Article 5 properties in France under €200,000