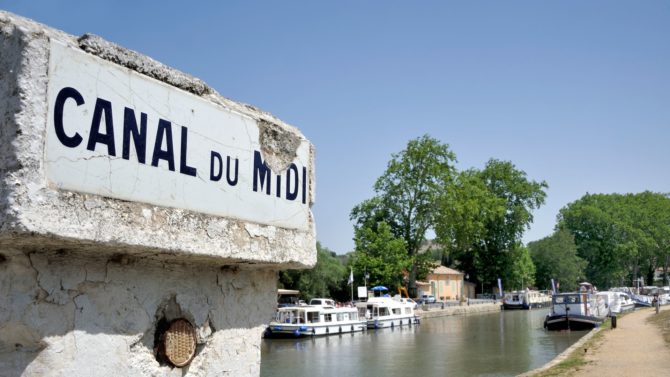 With coast, mountains and a vibrant capital, Hérault is a wonderful part of France. Jane Griffin and her family live an idyllic life in the canalside village of Capestang.

Where are you from and what brought you to France?
Although I’m originally I’m from Middlesbrough, I lived mostly in Bournemouth. We bought our house in Capestang in 2013 after passing through it on the Canal du Midi aboard our barge. The village ticked so many of our boxes. At first, it provided a good base for our boat because the canal flows just above it. My husband John is a pilot for British Airways so he regularly has to commute to Heathrow. We needed a base that was close to an international airport but not in a city. Capestang had everything we needed and it’s such a lovely village. Hérault has so much around too, we absolutely love it here. My top three reasons to live here would be the climate, it really is beautiful; the access to a stunning natural environment; and a very cosmopolitan atmosphere, which makes it easy for foreigners to settle into and enjoy life here quickly.

What kind of property did you buy, and did it need any work?
It’s an old house, probably about 150 years old, and in the old centre of the village, in a narrow street. We renovated it ourselves. The previous owners had started to modernise it so we picked up where they left off. Thankfully, John is really handy, a real bricoleur, so we did most of it ourselves. I’m pretty good with woodwork so that helped.

How easy was it to settle into the local community?
We knew nobody when we moved here but it was really easy to integrate. We lived on the barge while we renovated the house and life on a boat moored up in a village is pretty open – people walk past you, say hello. Plus John is extremely sociable; he’s the kind of person who won’t hesitate to knock on the door to say hello and have a chat. And then our daughter Sophie started school so through that we got into the family circles of the village. It’s interesting though because as English people in a French village, we still mostly socialise with people who aren’t originally from the village, including French people from elsewhere in France who arrived recently. Capestang is interesting like that; it attracts a lot of different nationalities, and this actually provides a kind of soft landing for newcomers. There are many other foreigners who can help with administrative stuff and so on. You can ask anything; you’re never alone.

How did Sophie cope with the French school and what are your thoughts on education over there?
Well, she started in école maternelle [nursery school, from age three] and I think it took her a term to get talking in French. She had heard some French in the crèche before starting school so I think that helped. Now she’s fluent and we’re the ones asking for help with our le and la! Like everywhere there are good and bad teachers, but Sophie’s really bloomed recently. The last two years of primaire have been wonderful for her. She’s also found a little friend now. She’s 11 so next year she goes to collège.

What do you do in France?
As I mentioned, John is a pilot but only part-time. We also each have our own businesses as independents, we both have a micro-entreprise. John renovates old record players and radios. He takes them apart, cleans and restores them and installs USB ports to be able to connect them to smartphones and modern speakers, for example. We have a huge garage, which is actually bigger than the house, where we have our workshops.
I have two different activities which I split into part-time jobs. I buy old wine barrels and convert them into furniture and decorative accessories: chairs, tables, lamps… all sorts. I’ve been doing that for seven years now. And my second activity, which I’ve just started, is – now don’t laugh – dog massage!

Do you have pets yourselves, and do they enjoy massage?
Yes, we have two dogs. Both have various health issues and I discovered that massage can really help them with pain, digestive issues and alleviating stress too. It’s fascinating and I’m passionate about it. I’m starting to get more and more clients through word of mouth; it’s great!

What do you enjoy doing in your free time?
We have a campervan so we love to travel around and explore the many beautiful sites nearby. Sophie and I do pottery classes in the village, she joined the local scouts and I’m involved in the local épicerie solidaire too. We go walking with the dogs, cycling, canoeing… so much! We visit Montpellier or Béziers, our local big town, for day trips. But it’s mostly just wonderful to walk out the door and immediately be immersed in nature.

Previous Article 48 hours in Paris: Unmissable new things to see and do on a short break in the city
Next Article Halloween: 5 French Films that will spook and disturb you