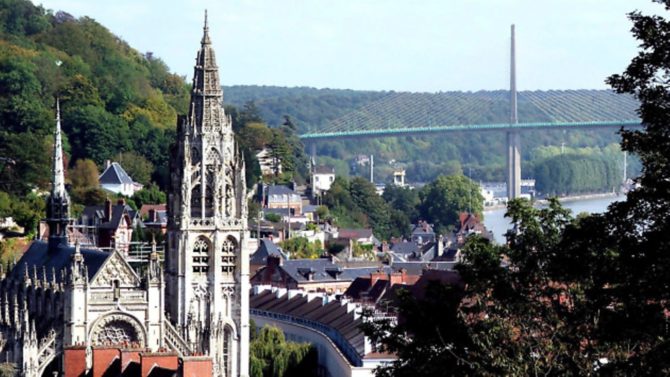 The white cliffs of the Pays de Caux are an iconic image of northern France, and the area is a favourite among artists, hikers and horseriders alike, as Carolyn Reynier discovers

From the banks of the mighty Seine to the Cauchois plain and the Brotonne forest, the Seine valley section of the Pays de Caux in Upper Normandy offers a mosaic of landscapes along its large horseshoe meanderings. Following the river from Rouen to Le Havre, it is a paradise for walkers, cyclists and riders.

In his early days, Claude Monet painted in Rouen, while Sisley set up his easel in the fields at La Bouille near the Roumare forest and in the charming village of Sahurs, near the Forêt de la Londe.

Further west towards Le Havre is the location where Turner painted his watercolour Between Quillebeuf and Villequier in 1834, which is now on display at the Tate Gallery and depicts the dangers of the Seine at the point where it follows its largest meander at the commune of Boucle.

Eugène Boudin, one of the first French landscape artists to paint outdoors, chose Caudebec-en-Caux. This 15th-century port has a population of around 2,500 inhabitants which increases substantially in the summer because of its location on the northern banks of the Seine.

Here, you are right in the heart of the Parc Naturel Régional des Boucles de la Seine Normande and the magnificent Brotonne forest, reached by crossing the Brotonne Bridge which provides viewpoints of the Seine to the east and west. The park was created 40 years ago to maintain and preserve the green lung between the two large urban poles of Rouen and Le Havre.

Along the banks of the Seine, there are many wonderful waterside villages including Vieux-Port with its old thatched cottages on the south bank. Continue a little further west towards Le Havre and the coast and you come to the Marais-Vernier. This former meander in the Seine is now a 4,500ha micro-region offering a rich diversity of flora and fauna, including the largest tourbière (peatland) in France. In the heart of the Marais-Vernier is the Réserve Naturelle des Mannevilles which can only be visited with a guide.

Further afield the Route des Abbayes gives the region further touristic appeal. Medieval abbeys abound, starting with the Benedictine abbey of St-Wandrille-Rançon just east of Caudebec, followed by the Abbaye de Jumièges, then the Abbaye de St-Martin-de-Boscherville west of Rouen. If you have the abbey habit, continue on into the neighbouring Eure department and the abbey at Le Bec-Hellouin.

If this sounds very much like your cup of tea, what kind of properties are available to drink it in? Patrice Gibon at Agence Immobilière du Parc specialises in character properties, including half-timbered maisons normandes, maisons de maître, cottages, villas and small manoirs. Prices in the area are reasonable, he says, and negotiation is still very much the name of the game.

The agency’s basic sector is the Seine valley between Le Havre and Rouen around Caudebec-en-Caux. However, having decided to concentrate on period properties, rather than a geographical area, Monsieur Gibon also markets properties further afield towards Dieppe, located to the north of Rouen.

As an example, he recently sold a 1930s neo-Norman colombage with a belvedere over the Seine for €340,000. This was situated on the outskirts of Caudebec in the surrounding Caux countryside, and you can currently find farmsteads and old properties for sale here, such as the 17th-century stone presbytery at Allouville-Bellefosse that Monsieur Gibon recently sold for €250,000.

This property came with one and a half hectares of land and needed complete restoration subject to the Bâtiments de France architect. The Monument Historique label can be a poisoned chalice, he tells me. It certainly adds value to your property but you cannot do just what you want to it.

If you are looking for something more modest, what about a longère normande? Prices for these long, low half-timbered one- storey buildings with either thatch or slate roof and 100-120m² of renovated living space sell for around €180,000-€200,000.

One close to Caudebec-en-Caux with five hectares of land including woodland sold recently for the latter price. If you fancy a bit of DIY (or paying someone else to do it) you can find longères requiring work for circa €150,000-€160,000.

Mr Gibon’s clients are primarily Parisians in search of peace and quiet at the weekend in the Norman countryside; the A13 motorway means the French capital is only 90 minutes away. There are, however, various employment opportunities in the area which attract purchasers of main homes. The property on the outskirts of Caudebec with the belvedere over the Seine was bought by someone moving into the area to work at Notre-Dame de Gravenchon.

RIDE OF YOUR LIFE

Patrice’s daughter lived in Paris and Rouen for a while but now works with her father and lives in La Mailleraye-sur-Seine inside the regional park. The father and daughter team recently sold a property here on a hectare of land with an 18th-century pigeonnier and ornamental pond for €250,000.

The advantages of Rouen are all those of a large city with everything close at hand, plus easy access to the French capital. It is a very attractive town, she says, with entire streets of half-timbered houses and a lovely historic centre. But to indulge in her great passion for riding she is much better placed at La Mailleraye where she rides in the Brotonne forest and along the River Seine towpaths. She says this whole area in the Seine valley is quite lovely – from St-Maurice-d’Etelan east to Jumièges and St-Martin-de-Boscherville.

Her love of horses was one of the reasons for returning to an area that is very much geared towards the sport of kings. Deauville is not far and is one of the venues for this year’s Alltech FEI World Equestrian Games to be held in Normandy between 23 August and  7 September. She competes in gymkhanas and loves galloping along the beach on the northern Normandy coast, known here as the Alabaster Coast thanks to its chalk cliffs.

Although the water can be a bit too cold for her, she goes to Les Petites Dalles west of St-Valery-en-Caux, a small, quiet beach, typical of those you find along this stretch of coastline. There are plenty of small creeks between the cliffs, she explains, at places like Veules-les-Roses. Inland at Jumièges, in one of the bends in the Seine, you can bathe in the reservoir at the Jumièges-Le Mesnil outdoor leisure centre, which is open all year long.

Above all, it is the rural nature of the area that appeals and the associated country pursuits. There are a lot of horses, certainly, and also plenty of opportunities for la chasse of water fowl and small game. And if all this outdoor living gets too much and you need a city fix, regular rail connections will take you to Paris in just 90 minutes.

During the canicule (heatwave), when she was working in Paris, she came home every weekend and for once swam a lot, she laughs.

“I returned on a Monday morning, catching a train which arrived at 8.30 or 9 o’clock at Paris St-Lazare, and it was great.”

When she was studying in Paris she also returned often at weekends to enjoy the country air and have a break. Today, she is happy in the Normandy countryside and when she goes to Paris to shop and see friends she is soon back home.

So if you see yourself meandering along towpaths, be it on horseback or Shanks’s pony, or sitting on the banks of the Seine painting an Impressionist masterpiece to knock Monet into a cocked hat, pop open a bottle of French cidre and start planning your own move to Normandy.

All featured properties are from Agence Immobilière du Parc