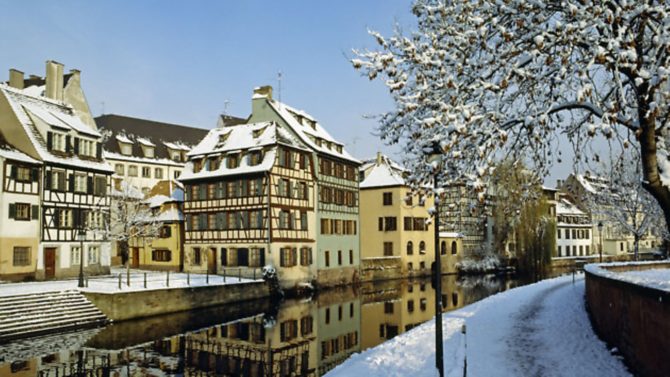 These 3 winter wonderlands are full of festive spirit, yet make ideal year-round destinations for visitors and househunters, as Vicky Leigh discovers

There’s something very special about the north-eastern corner of France. Alsace in particular has it own special kind of magic, thanks to its proximity to the German border and the cultural influences that have been crossing it for centuries. In fact the region has been involved in many a tug-of-war between France and Germany throughout the course of history, which makes the culture in this corner of France all the more unique. Having changed hands between the two countries it feels French in some parts, German in others – and you’re likely to hear both languages spoken – yet at the same time the two come together to create a special blend of both. When you think about it, that’s a pretty good two-for-the-price-of-one offer.

Flights to Strasbourg are available from a number of UK airports too, and low-cost airlines easyJet and Ryanair both depart from London, while the TGV from Paris has a journey time of two hours 20 minutes.

During the festive season a visit to the capital Strasbourg is a must, as it is home to the oldest Christmas market in France, not to mention one of the largest Europe with some 300 wooden chalets spread across 11 sites in the city centre.

For the rest of the year, there’s plenty to see and explore, from the sleek and contemporary European Parliament buildings to the pastel-coloured half-timbered houses on the winding streets of ‘Petite France’. The whole of the city’s historic centre is classified as a UNESCO World Heritage Site, and the famous astronomical clock, located in the Cathédrale Notre-Dame, is not to be missed.

At €198,000 the average property price in Alsace according to Notaires de France figures is somewhat higher than the national average of €160,000. This rises to €204,000 in the Bas-Rhin department, and to €297,400 in the Strasbourg sector, which is perhaps to be expected in view of its capital city status, not to mention important European connections. However this is by no means the most expensive capital city in France, and let’s not forget that average prices in London have now reached almost half a million pounds.

Enjoying a Mediterranean climate, Provence and the Côte d’Azur are renowned for warm weather and plentiful sunshine throughout the year, basking in the highest number of annual sunshine hours in France (2,724 to be exact). It’s not exactly a well-kept secret that the south of France is a popular summer hotspot, thanks to an abundant supply of sun, sea and sand, but it’s got snow, skiing and seasonal cheer covered too. With mild temperatures in winter and without the crowds of the peak summer season, where better to chase away the blues when your spirits are in danger of being dampened by dark days and grey skies? Queen Victoria certainly thought so, and if it’s good enough for royalty….

The weather might make it feel more like summer, but there’s no shortage of ways to get into the festive spirit. Follow the Circuit des Crèches in the medieval village of Lucéram, a 30-minute drive from Nice, before heading back into Nice to the Village de Noël on Place Masséna, where you’ll find an ice skating rink and Ferris wheel alongside the traditional wooden huts selling mulled wine and gifts.

If you’re feeling brave enough for a bracing swim then there’s always the annual Bain de Noël. Held at Ruhl Plage on Nice’s Promenade des Anglais, the Christmas day swim has become a yuletide tradition which sees hundreds of hardy swimmers diving into the waves.

Another option is to get your skis on and hit the slopes – the Isola 2000 ski resort is just 90 minutes from the Riviera and at an altitude of 2,000 metres offers 120km of runs for a range of skiing abilities.

So, that’s sun, sea, sand and even real snow all ticked, and there’s a lively festival scene offering year-round entertainment too, from the famous carnival and lemon festival in February through to the jazz and jasmine festivals in the summer months.

The fact that this corner of France is so easily accessible from the UK, thanks to direct flights with low-cost airlines to Nice airport, makes this part of the country even more attractive.

Property in Provence-Alpes-Côte d’Azur is, unsurprisingly, more expensive than anywhere else in France outside of Paris. The region’s average resale price of €290,000 is close to twice the national average of €160,000, although prices have in fact fallen by 2.3% since last year. Alpes-Maritimes is the most expensive of the region’s departments, where the average property price climbs to €417,500, although again this has dropped from the €440,000 recorded in 2013. So, while your euros might well go further in other parts of France, they’ll go further here than they would have done a year ago, and mortgage rates have since reached new lows too.

Mention skiing and France in the same sentence and your mind probably wanders straight to the Alps, but cast your eyes further south and you’ll come to the Midi-Pyrénées region, which is equally deserving of attention.

The climate is influenced by both the Pyrénées and the Massif Central, which means winters can be cold with heavy snow on the mountains – the perfect conditions for swishing down the slopes. Situated between the Mediterranean and the Atlantic and forming a natural border between France and Spain, not only will you find 1,000km of marked pistes in 38 resorts stretching across several departments, but those resorts tend to be less crowded and less expensive too.

Grand Tourmalet in Hautes-Pyrénées is the largest ski area in the French Pyrénées, and is the second oldest ski resort in France after Chamonix. Home to a number of stations including Bagnères-de-Bigorre, La Mongie and Barèges, it is located at the foot of the Pic du Midi, one of the most majestic summits you’re likely to see and accessible via cable car from the base of the Col du Tourmalet.

After a long day on the slopes you might well find that you’re aching in places you never knew you had muscles, but fortunately you’re in the right place for that too. Due to an abundance of thermal springs, dating back to Roman times, the area was at the forefront of the spa industry boom in resorts such as Cauterets, Bagnères-de-Bigorre and Ax-les-Thermes.

While it’s all about the white stuff in the winter, when the snow melts there are endless walking opportunities on the numerous marked routes, including the well-known GR10 hiking trail which crosses the Pyrenean mountain range from east to west. If that’s not challenging enough, you can always hop on your bike and take on the gruelling Tour de France climbs or have a go at white-water rafting or paragliding.

There are flights from the UK to Toulouse and Rodez, and to Carcassonne just across the border in Languedoc-Roussillon, which might be more convenient depending on where you want to get to.

The Pyrénées are more than a match for the Alps when it comes to property prices too. While the average price in Rhône-Alpes comes in at €211,700, making it the second most expensive region in mainland France, in Midi-Pyrénées it matches the national average of €160,000. However this falls to €140,000 in the Hautes-Pyrénées department and to just €102,000 in Ariège, so a pad near the peaks here won’t cause too much damage to the bank balance. In fact Bagnères-de-Bigorre is the least expensive of the three sectors in Hautes-Pyrénées – if you’re in the market for a house – with an average price of €121,800. This is the most expensive sector for apartments though, with an average price of €2,050/m2.

Looking for your own property in France? Click here for over 19,000 properties for sale

Previous Article Location spotlight: Aquitaine
Next Article WIN! A copy of A Week in Paris