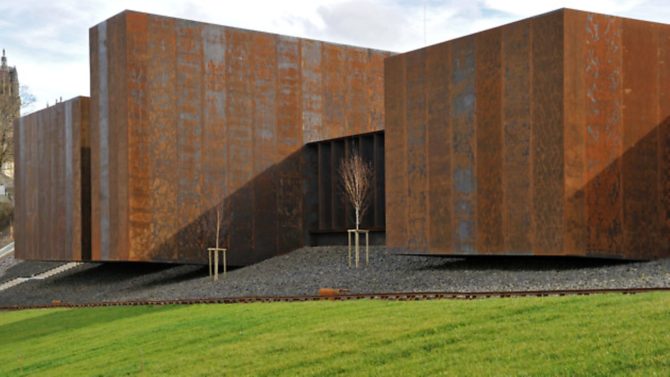 Nav Vilain heads to the Aveyron capital to tell the story of one of the city’s sons, contemporary artist Soulages, whose uncompromising use of black sets him truly apart

Something tremendous has just happened in the world of contemporary art right in the city of Rodez in southern France. The capital of the Aveyron department has recently become the privileged host to a museum dedicated to the contemporary artist Soulages.

You may not have heard of Pierre Soulages but to put it quite simply, he is the most well known contemporary French artist in the world. His work is displayed throughout the globe in 90 museums, including the Tate Gallery in London and also the Guggenheim Museum in New York. In 2009, the Centre Pompidou in Paris dedicated the largest show ever to a living artist, attracting a massive 500,000 visitors. Unsurprisingly, in financial terms he is also the most successful French artist, with his paintings from the 1950s and 1960s fetching between $1m and $4m.

At 94 years old, Soulages paints almost everyday, exclusively in black. Indeed he has consistently worked with the colour black over a period of decades. When he was only six years old his older sister caught him painting thick black lines and when she asked “what are you painting, my little Pierre?” Soulages replied “snow”. Black has played a phenomenal role in his work since a young age. The artist paints an entire world from the colour black and there is more than meets the eye, to the point where colour becomes somewhat irrelevant. He brings a certain intensity and depth to his paintings coupled with defined textures. His fascination with light, and allowing light to reflect off black, provokes interesting discussion. However, the paintings are not necessarily dark. His abstract works invite one to drop all judgements and preconceived ideas of what the colour black provokes in us, and go beyond the colour thanks to the light.

Pierre Soulages was born in the small city of Rodez on 24 December 1919. His fascination with prehistoric art would form a basis for his life as an artist. In 1938, he enrolled at the famous École Nationale Supérieure des Beaux Arts in Paris, but chose not to attend due to his displeasure with the institution’s approach to art. He used this time instead to familiarise himself by visiting exhibitions of his favoured artists, including Picasso and Cézanne, before heading south to study at art school in Montpellier. After the war, Soulages moved to Paris where he started painting only abstract art while omitting the use of vivid colour. Instead he used the colour, or non-colour, black, much to the opposition of the French contemporary scene at that time. In 1948 he took part in a pioneering exhibition on French abstract art in Stuttgart where he was one of the youngest artists to have work presented. Indeed, one of his paintings was used for the exhibition poster and his reputation spread due to his challenging style reliance on black, which gave him a truly unique position from which he gained worldwide recognition.

At this early stage of his career, black was used in strong bold lines and as a contrast, together with other single colours or walnut stain. However, later on his entire work became black. He moves beyond the boundaries of the colour and in his period ‘Outrenoir’ (or ‘beyond black’ or ‘the other side of black’) he shows the depth of his work, into which one is drawn, and how light can be reflected off black in order to produce very interesting dimensions, sometimes exceptionally subtle and sometimes quite dramatic. Soulages says: “Black is the colour of the origin of painting – and our own origin.”

It was in Conques, situated 25 minutes from Rodez, that a 14-year-old Soulages was said to have experienced his first artistic inclinations and decided to become an artist.

On three separate occasions during his career, Soulages had been asked to produce stained-glass windows for a certain historical monument, but he refused each time. However, when asked to create the stained glass windows for Conques Abbey he immediately accepted.

Working with the exterior light, Soulages wanted to evoke an intimate emotion for the visitor. In order to fulfil this he abandoned traditional glass and set about creating a unique type of glass that did not exist. The entire project took seven years from research to creation, and in April 1994 work on 104 stained glass windows was completed at Conques Abbey.

It is to the town of his birth that Soulages and his wife of 70 years, Colette, donated 500 paintings, valued at €40m, from throughout the ages of his work, from post-War oil paintings to more recent ones. The Museé Soulages is situated just a stone’s throw from where Soulages was born and it is in the gardens of what is now the museum where Soulages played as a child.

Several decades on, Rodez has succeeded in rejuvenating this corner of the city to transform it into a dynamic site fit for an internationally renowned artist of such calibre. Although dedicated to Soulages’ work, it was essential for the artist that a significant section be secured as a temporary exhibition for worldwide contemporary artists.

The museum, attracting huge national and international attention, opened its doors on 30 May 2014 and in only one month alone it welcomed more than 34,000 visitors. The 6,600m2 museum beautifully rises from its base and has been praised and admired by the French press as an “exceptional site” for working so harmoniously with its surroundings. Designed by a team of young, award-winning Catalan architects, the building consists of a series of rectangular cubes made from glass and weather-resistant steel. Between the cubes are openings and pathways allowing visitors to enter from various sides of the town. The exterior will weather in time to create a layer of protective rust that cleverly reflects the colours and shades of Aveyron and the spirit of Soulages’ work through the ages. This is a building in motion on the inside and outside.

Rodez, in the department of Aveyron, is situated almost equidistant between Toulouse and Montpellier in south-west France, six hours’ drive from Paris but only four hours’ drive from Barcelona. It is a small city dominated by its grey-pink cathedral in the very heart of the cobble-stoned streets. Rodez has one of the lowest unemployment rates in France and also has one of the lowest crime rates of any French city.

Since 2009 and the economic crisis, property prices have dropped by as much as 30%. Couple that with the favourable sterling to euro exchange rate and Rodez and its surrounding countryside offer a very attractive area in which to purchase property right now.

With the crisis years behind us, buyers today have a vast and excellent selection of the finest of character properties in a quiet and rural corner of France. The selection of properties pictured here is certainly testament to that.