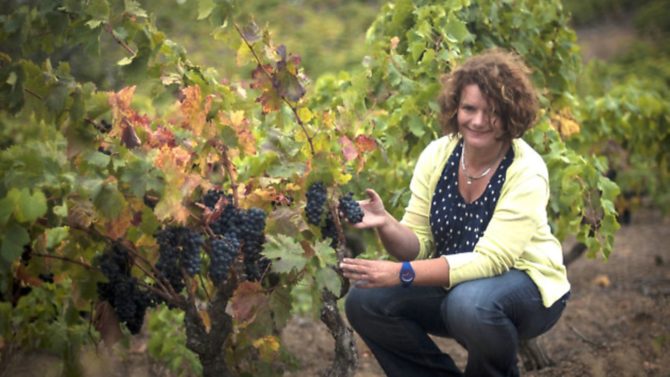 The ancient Cathar castle of Quéribus, in the heart of the far south-west wine region of Languedoc-Roussillon, looks down on a small ancient vineyard, where Katie Jones, originally from Leicestershire, cuts an unlikely, solitary figure as she trains the stray tendrils. More surprisingly, she owns the vineyard.

“I always wanted to live away from the crowds in deepest rural France, ever since reading Marcel Pagnol’s novel Jean de Florettewhen I was young,” she says. “It struck a chord and I imagined roaming the hillsides with a herd of goats and falling in love with a handsome Frenchman.”

She found the handsome Frenchman (and marries Jean-Marc next year), but ended up tending vines instead. The couple live in the town of Tuchan where Katie did the marketing for the local cooperative wine cellar for more 15 years before taking the plunge and buying her own vineyard.

“The wildness of the scenery and the emptiness of the countryside are breathtaking,” she says. “You can drive for miles without seeing another car.”

She bought her first vineyard with the help of her parents Liz and Bob in 2007; since then she’s bought two more, halfabandoned plots of vines, which the locals considered too old and low-yielding to make a decent profit. And she got them for a very low price; vineyards are much cheaper in this out-of-the-way spot than they would be in Bordeaux.

She hired an Australian winemaking consultant, David Morrison, to teach her how to turn her grapes into wine; working out of a small building in Tuchan. Success came in 2012 when her rich, deeply fruity Domaine Jones Fitou won a trophy at the International Wine Challenge in London.

It hasn’t all been perfect in paradise though. In 2012, vandals broke into her small winery and drained away the entire vat of her unbottled white wine. “It’s been a bit more Jean de Florette than I might have wanted at times,” she admits, but she has carried on making wine.

She doesn’t have any time to explore the rest of France right now. “Looking after the vineyards, making and bottling our own wine takes up every waking hour,” she says, “but I do make sure I take a moment at the end of the day to sit under the olive tree and have a lovely glass of chilled white. In the end, creating wine out of these dramatic old vineyards is immensely rewarding.”