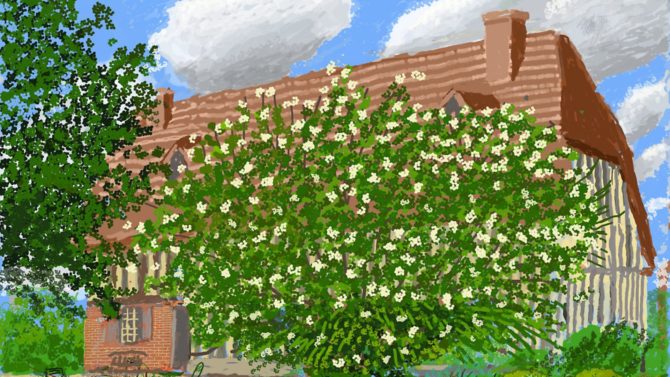 Opening this month, David Hockney: The Arrival of Spring, Normandy, 2020 comprises a new body of work created by the Bradford-born artist during a period of intense activity at his home in Normandy, charting the unfolding of spring.

The time in which the works were made coincided with the beginning of the coronavirus pandemic, when Hockney, along with the rest of Europe was in a state of lockdown. Faced with an unprecedented and disconcerting period, Hockney’s focus on the emergence of spring instead celebrates the natural world and urges people to ‘love life’.

Hockney, who was born in Bradford in 1937 and studied at the Royal College of Art, had been living in LA since 1979 before deciding to move to the French countryside.

This is the first time the works will be exhibited, opening exactly a year after they were made. Hockney has been fascinated by conveying the passing of time through painting and the exhibition will present over a hundred works that have been ‘painted’ on an iPad. Presented chronologically, the works will be printed on paper at a large-scale and densely hung evoking a sense of emersion in nature across three rooms in the Main Galleries at the Royal Academy of Arts in Piccadilly.

Hockney has taken inspiration from the Bayeux Tapestry’s graphic and narrative form, which is located near to his home in Normandy and to which he returns to view frequently. In 2019, Hockney spent time in Normandy, prolonging his stay to capture spring in this rural corner of France, knowing that it would differ from the spring he had witnessed, painted and drawn in Yorkshire over 10 years between 2003 and 2013.

Throughout his long career Hockney, now 83, has explored a variety of media in the making of art, as well as investigating the ways in which new technology can be used. Last year saw his renewed interest in the iPad, when a mathematician updated the ‘brushes’ app on the newest model, tailoring it and developing many features in response to Hockney’s specifications.

In July 2020 Hockney wrote: “I have been working this year, 2020, to depict the arrival of spring in Normandy. This takes about three months, and I think it’s the most exciting thing nature has to offer in this part of the world.

“When the lockdown came…we were in a house in the middle of a four-acre field full of fruit trees. I could concentrate on one thing, I did at least one drawing a day with the constant changes going on, all around the house.

“I kept drawing the winter trees, and then the small buds that became the blossom, and then the full blossom. Then the leaves started, and eventually the blossom fell off leaving a small fruit and leaves, this process took about two weeks, all the time I was getting better at my mark making on the screen, eventually doing, à la Monet, the water lilies in the pond.”

The exhibition will be on show at the Royal Academy of Arts from 23 May to 26 September 2021 before moving to the Centre for Fine Arts, Brussels. It is open from 10am to 6pm Tuesday to Sunday, admission from £17; under-16s go free.

Discover the magical murals of Béziers

In the footsteps of artist Henri Matisse in and around Nice

Previous Article 10 of the top boutique hotels in France
Next Article What’s it like getting a visa to move to France post-Brexit and mid-pandemic?