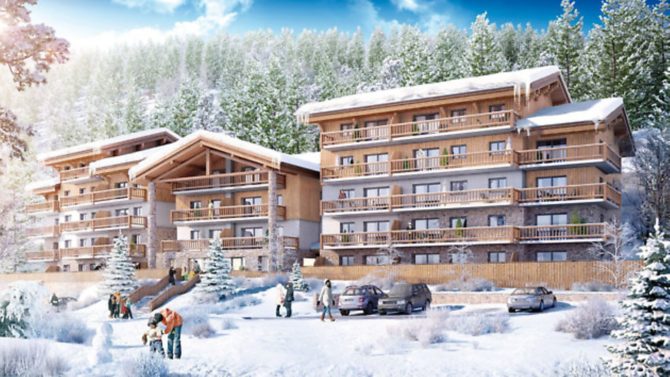 Construction of new ski properties in ‘the sunniest ski resort in France’ continues apace in the wake of news of new pistes and ski lifts. ADVERTISING FEATURE

Construction work to create 33 new leaseback apartments in the popular French Alpine ski resort of La Rosière in the Tarentaise Valley is progressing apace in the wake of news that 30 km of new pistes are to be added to its existing 150 km of ski slopes. Two new ski lifts in the resort will give skiers access to the new slopes from the end of next year.

That will coincide with completion of the apartments – Chalet Les Marmottons – being built by the region’s leading developer, MGM, in a ‘ski-in’ position just above the town centre.

Richard Deans of MGM, which has already sold half of the apartments off-plan, says that the improvements for skiers include long-awaited new red and black runs which will give the resort – already known for its good beginner and intermediate skiing areas – the variety it needs.

Chalet Les Marmottons is MGM’s fifth development in La Rosière. Dubbed ‘the sunniest ski resort in France,’ it is the gateway to Espace San Benarado, the international ski area in the French Alps linking the resort with La Thuile in Italy’s Aosta Valley.

The design of Chalet Les Marmottons is in keeping with the typically Savoyard timber and stone finishes which are a feature of the resort. Internally MGM has responded to research by blending traditional materials with modern finishes so that some internal walls are clad in wood or have bright white finishes; floors are in a mix of stone and larch parquet, and timber kitchens have given way to contemporary fitted models with granite worktops.

‘These changes, combined with greater use of spotlights, create a twenty-first century feel within our traditionally-styled exteriors which include spacious balconies,’ says Richard. He added that the development is expected to achieve four-star status once it has opened for business and been assessed by Atout France.

La Rosière, which is home to a wide variety of traditional French restaurants and numerous lively après ski bars within a short stroll of Chalet Les Marmottons, was built on the former Roman road through the Petit Saint Bernard Pass linking France with Italy.

Occupying a sunny south-facing mountain ‘balcony’ at an altitude of 1,850 metres, so that snow is guaranteed throughout the ski season, the resort has access to 150 kilometres of pistes within the Espace San Bernardo ski area which embraces La Thuile in Italy.

La Rosière is a 50-minute bus ride from Bourg St Maurice, the destination for Eurostar trains direct from London’s St Pancras International station during the ski season. The nearest airport is at Chambery, two hours and 45 minutes by road. Geneva Airport is three hours and 45 minutes away.

?Off-plan prices of apartments at Chalet Les Marmottons range from €220,000 for a one-bedroom property with a floor area of 45 sq m to €467,000 for a 100 sq m four-bedroom home. The prices exclude French VAT at 20 per cent which is waived under the leaseback scheme. For more information call MGM on 0207 4940706, email [email protected] or visit the website www.mgmfrenchproperties.com

Previous Article Thinking about buying a property in France?
Next Article 12 ways to live a sustainable lifestyle in France