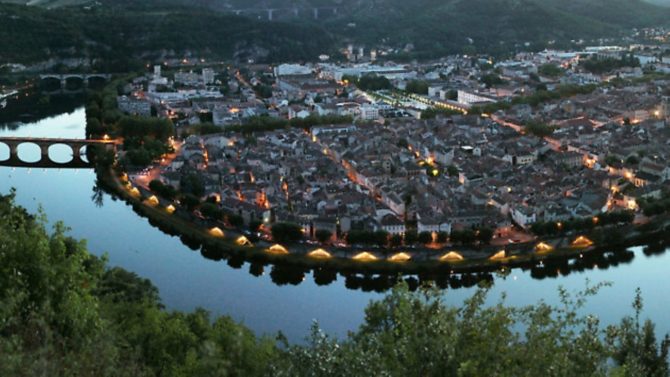 According to Michel Labrousse’s L’Histoire du Quercy, the Cahors area has a colourful history. Taken over by the Gauls of Cadurques who arrived from Germany in successive migrations from the 8th to 6th centuries BC, this military and political aristocracy established itself through the use of iron weaponry over the indigenous people. Their name came from the Gaulish root cados meaning beautiful, and its first reconstructed form, cadorci, may have signified “those who live on the banks of a beautiful river”.

Without a doubt, the River Lot fits that bill and nestled in a large loop of it lies the medieval town of Cahors, which in 2005 was named a Ville d’Art et d’Histoire by the Ministry of Culture for its rich cultural heritage.

The well-preserved Pont Valentré, the famous jewel in Cahor’s medieval crown, is on UNESCO’s World Heritage List and the bridge is on a pilgrim route as devotees pass through on their way to the shrine of Saint James in Santiago de Compostela in northern Spain.

Canadian professor Louisa Jones, a great lover and author of books on Mediterranean gardens, says Cahors deserves particular mention for the intimate character of its multitude of secret gardens.

“You get the impression of entering into someone’s garden,” she says, “which is a rare phenomenon in the creation of green public spaces.”

At the foot of the bridge, the jardin d’ivresse is planted with vines, a reference to Cahor’s famous black wine. This is the starting point for the jardin secret circuit which takes visitors to the cottage garden of Les Cordeliers, a religious order of Saint François of Assisi, and to the Clos des Jacobins, a monochrome white garden close to the ruins of the ancient Jacobin monastery.

Cahors isn’t merely a sleepy rural town, though. Approved by the municipality in 2010, a new town plan has laid down some guidelines for the town’s future development. The plan is based on developing the town’s appeal through the preservation of the Cadurciens’ way of life, economic development and the creation of more housing throughout the up-and-coming territory.

With 15,000 jobs and 2,300 businesses, Cahors is the Lot department’s main hub of activity. Together with the surrounding area known as the Grand Cahors, this makes up the main economic basin in the very north of the Midi-Pyrénées region. Its road, rail (Paris-Toulouse) and airport infrastructures (Cahors-Lalbenque airport) are all trump cards for economic development.

To find out more about the local market, I spoke to Bernadette Bégout who bought the Agence Gambetta over 20 years ago and more recently created Immobilier Champollion.

Madame Bégout’s agencies cover the whole of Lot as well as parts of neighbouring departments but the prime market remains the popular Cahors and its environs. She tells me about a young couple who are buying a house to live in now during the holidays and retire to later in life. “They are from Grenoble which is a very attractive region,” she says. “We are very proud that they prefer Lot.”

Her expat clients are mainly South African and American who are interested in the media-hyped Plus Beau Village St-Cirq-Lapopie, including a couple of professors who bought a house from her 20 years ago. They visit each year during their long holidays and are now taking a sabbatical year in Lot to write a book.

The luminous Quercy Blanc is also popular because of its proximity to la ville rose, Toulouse, and the city airport.

Madame Bégout says that in the Middle Ages Cahors was more important than Paris.

Because it lies in a large loop in the Lot, access to the town is by one of several bridges. The town is divided into two by the Boulevard Gambetta which runs north from the Pont Philippe, with the old medieval town to the right.

Today, properties in the historic centre rarely change hands as they are often kept in the family for several generations. The medieval façades are magnificent and the streets quaint and narrow, as they were originally built centuries ago to protect people from heat and cold.

The area to the left of Boulevard Gambetta is home to detached 19th-century bourgeois houses. To give an idea of property prices, Madame Bégout recently sold one with 130m2 of living space and a garden for €350,000.

In the ’90s they started building brighter bungalows with larger windows where you can easily keep an eye on children outside. You can also find a few 1930s Art Deco bourgeois houses which are very pleasant.

The property market in the town centre is a very particular one because Cahors is surrounded by water.

“It’s difficult to build anything in the town because the land is either classified or liable to flooding,” Bégout says.

This means there is a lack of residential apartment blocks with elevators for an ageing population who want to live in this quiet market town. Those apartments where there is a lift are expensive. As an example, Bégout says a 100m² apartment in a modern residence will sell for around €250,000-€300,000.

Somtimes called the ‘Tuscany of Lot’,the Quercy Blanc features a very special luminosity of building produced by the local white stone which has long appealed to visitors.

One example of this is a house with a gîte in a small converted barn. The entire property has been renovated with beautiful parquet flooring and is on the market for €420,000.

Another great attraction of these parts is the quirky Quercy pigeonnier which comes with many old properties. Many people successfully convert these into cosy en-suite bedrooms and studios.

Originally, owning a dovecote was a sign of wealth because the dowry in days gone by was paid in doves. If you had a pigeonnier you clearly had lots of pigeons and presumably had married into money.

“Modern buyers love to use unique spaces to create charcterful homes,” says Bégout. Whether it’s an old wine cellar, converted attic or pretty dovecotes, the success of the conversion depends on how sympathetic you are to the building when carrying out the work. As she says, “just like with people you love, you must accept houses with their defects and capitalise on their unique charm.”

If you are interested in buying a more substantial property in Lot, such as a hunting domain or a château, Ludovic Mouly at Mouly Immobilier is your man. The English-speaking Cahors-based agent believes that now is the time to buy as prices for these types of property have fallen 20-30% since 2008 bringing them back to 2003-04 prices.

Interest rates continue to be low but prices are unlikely to fall any further. “For those who want to invest, this is the best moment,” he says.

His main clients are from northern French cities such as Paris and Lille, as well as northern Europe, primarily Belgian and Dutch. Many buyers are purchasing main homes prior to retiring to the region to enjoy the “space, quality of life and feelings of security”.

You can find properties in the €600,000-€800,000 price bracket in pretty locations with good views which have been completely renovated.

He speaks of expat clients interested in buying vineyards to produce wine and market it through the Asian and North American networks they have built up during their working lives. Hunting is also popular and small groups of four or five investors will buy 100 hectares or so of enclosed land where they can hold hunting parties for their friends, as well as being able to sub-let the property.

If you require any further persuasion to consider this area, just think of the surrealist writer and poet André Breton who bought a house in St-Cirq-Lapopie in the ’50s. “J’ai cessé de me désirer ailleurs,” he said and returned to the area each year. Once you discover this part of Lot you may stop wanting to be elsewhere too.