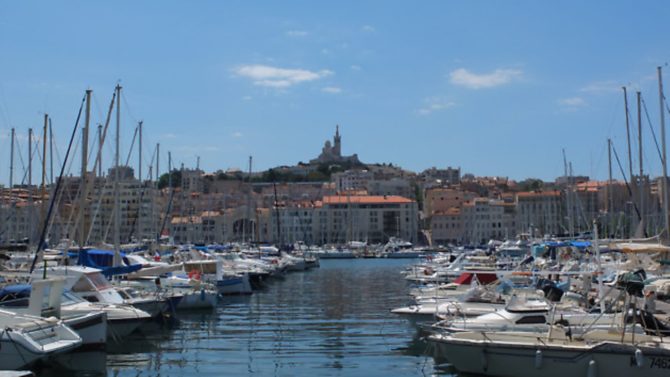 Sea, sun, culture and affordable property – all this and more is on offer in this Mediterranean city where bourgeois meets bohemian

If sleepy French villages are just too… well, sleepy for your tastes, why not consider a city location, where you will never run out of new things to do, streets to explore, and restaurants and bars to sample. On the sunny Mediterranean coast, Marseille is a city that combines a rich heritage with a vibrant modern approach, and where owning a property means never being bored.

It’s also easier to reach than ever before, thanks to a direct Eurostar service, launched in May, and taking just six and a half hours from London. You can still fly to Marseille, of course, but there are plenty of reasons to let the train take the strain, from the joys of watching the French countryside whizz by to avoiding the hassle of airport security and baggage restrictions.

Marseille is the perfect place for a cultural city break exploring the museums (all 21 of them) and art galleries on offer, before heading to the beach. All the things that make it great for a holiday also make it perfect for a holiday home – with the added advantage that owning a property here will constantly give you new things to do. For those seeking a whole new life – and needing an income to support it – Marseille is a thriving economic hub.

The city’s rich heritage is complemented by vibrant new quarters. This is a city on the up. While the catalyst for Marseille’s rebirth was becoming the European Capital of Culture for 2013, it has been evolving for much longer than that. Launched 20 years ago, Euroméditerranée is the largest urban renewal project in southern Europe, encompassing €7bn worth of regeneration works. The highlight is undoubtedly the spectacular MuCEM (Museum of Civilisations from Europe and the Mediterranean) by architect Rudy Ricciotti, a concrete honeycomb linked by walkways to the 17th-century St-Jean fort, closely followed by Stefano Boeri’s Villa Méditerranée, a cantilevered building suspended over the water on the once-abandoned J4 pier, while in the Vieux Port, Lord Norman Foster’s Ombrière is a huge mirrored ‘umbrella’ which not only provides shade and a place to meet but reflects the port back at you.

You could easily spend all your time around the port, sampling the many restaurants (seafood a speciality, Marseille is the home of bouillabaisse after all) and browsing the artisan markets along the harbour. But the beauty of this place is that there’s something new to discover around every corner.

Le Panier old town, between the port and the Romanesque-Byzantine cathedral, offers quaint winding streets and squares lined with restaurants and quirky boutiques, while the revamped docks area, the Euromediterranée zone, is home to swish new apartments and offices, the stylish Halles de la Major (heaven for foodies) and Marseille’s latest retail centre, Les Terrasses du Port,. The city’s only skyscraper, H99, can be found here too, with luxury apartments on offer from €260,000.

On the opposite side of the old port, the Notre-Dame de la Garde basilica keeps guard over the city, offering panoramic views from its hilltop position – the 11m-tall golden statue of the Madonna and child are believed to protect the city’s inhabitants. Catch the tourist train for a fun ride up – it’ll also take you on a tour of the coast and upmarket hillside districts, where wealthy merchants watched their ships come into port from their luxurious homes.

When the city buzz becomes too much, you can hop on a bus and head down the coast to quieter Mediterranean resorts, villages and beaches. The nearest sandy beaches (Prado, Prophète and Catalans) are within a cycle ride of the old port, or you can catch a boat to the Frioul islands or the stunning calanques along the coast – these small limestone bays were given national park status in 2012. The Frioul boat stops first at the Château d’If, the prison island where truth and myth mingle – it’s best known as the location that inspired The Count of Monte Cristo by Alexandre Dumas.

Unlike the glitzy Riviera resorts further east, Marseille offers a more affordable route to a home on the Med. The city has an average square metre price of €2,445 for apartments and €3,111 for houses – compare that to €9,445 and €14,836 in St-Tropez.

Many Parisians have bought here in recent years, inspired in part by the popular TV soap Plus Belle la Vie, set in Le Panier, as well as the low property prices. Investors also favour Marseille, whose old town pieds-à-terre, Belle Époque mansions and contemporary developments are all in high demand from renters.

According to Credit Foncier, the Marseille property market slowed in 2014 and is expected to fall a little further in 2015, suggesting now could be a good time to pick up a bargain. The most sought-after neighbourhoods showed the strongest performance, with just a 5% fall in prices last year.

“The face of Marseille has completely changed,” says François-Xavier de Vial, Director of Home Hunts, who has lived in Marseille for more than a decade. “It’s quite bourgeois now. Although once associated with drug crime and violence, a quick walk through the pulsing heart of Marseille would quickly quash any negative assumptions one might make. France’s second city is economically thriving, socially magnetic and architecturally celebrated.”

He explains that the most popular locations include the old port, the 7th, 8th and 9th arrondissements (like Paris, Marseille is made up of arrondissements) and L’Estaque, a fishing village to the west of Marseille and officially the city’s 16th arrondissement. Further afield, locations such as Cassis – 35-minutes’ drive from Marseille – and the Côte Bleue, are also sought after.

“International buyers tend to seek large villas with sea views, although they are difficult to find,” explains de Vial. “They are also keen to buy apartments around the Vieux Port, as a second home or to rent out seasonally.” Those wishing to relocate permanently opt for the “beaux quartiers”, he adds, around Avenue du Prado and Boulevard Périer (Monticelli Square), where most of the foreign consulates are located.

Cours Julien is the place for “young, hip, music/art lovers and Londoners” suggests Nicole Cook of Leggett Immobilier. “An artsy quarter with concert halls, shops of all kinds, bars, theatres and a diverse range of delicious restaurants, this reasonably priced area is mostly tourist free,” she explains. “The smaller streets lead you to cool stores selling locally hand-crafted items and clothing, record shops and tea salons.”

For “young families who want a garden and security but to remain in the city and be close to public transport” she recommends St-Barnabé: “It’s said to resemble a typical small Provençal town right in the city of Marseille, or a ‘village dans la ville’, boasting numerous boutiques, butchers and bakeries. It has a modern Métro station that takes you to the Vieux Port in about 10 minutes, but has nearly everything you need including a good-sized grocery store.

“Château Gombert is home to the Marseille Provence Technology Park – or Technopôle as it’s known. It benefits from great economic development and a lot of researchers and other employees buy property there.”

For “classic upscale city living” choose Perier and Prado, says Cook. “These areas feature classic French city style. Perier is a sought-after residential area with beautifully renovated apartments, bakeries, restaurants and shops. Prado is the banking district and is often filled with people at the large outdoor market or going to one of the many businesses in the area.

“These bustling centres spread to neighbouring quarters Castellane and Baille as well. Castellane, recognised for its celebrated fountain, has two movie theatres that regularly play films in English, and is lined with traditional cafés and restaurants. Baille is a charming business and residential area with language schools, yoga studios, offices, great lunch spots and coffee houses.

“For coastline living, look at La Corniche, a long stretch of coast where the houses look out over the sea, or Vallon des Auffes, an adorable old fishing village with converted summer homes and a three-Michelin-star restaurant.”