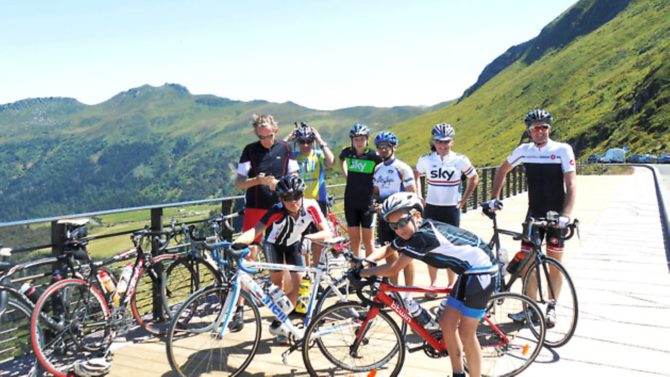 Sam Parry, her husband James and their two sons left their life in Surrey in 2008 and moved to Corrèze in Limousin where they set up a cycling holiday business in the countryside. We find out how they did it and if it was worth it

Set the scene for us – what’s your background, and how did you find Corrèze?

We’re a family of four; we used to live in Reigate in Surrey and had got a bit fed up of the hectic commuter lifestyle there. We first came to Corrèze on holiday in August 2007, and it was love at first sight really. I grew up spending a lot of time with my aunt and uncle in the Surrey hills, riding horses and working on farms. The countryside here is just like that, but a lot bigger, and with much better views. When we came here on holiday, something about the area chimed very deeply, and I just felt like I was at home.

We had a window in time where our boys William and Ben were 10 and seven when we moved – any later it would have started to affect secondary school – so it was almost like we had to go then, or not at all. And so in July 2008 we moved, and here we are.

How did you make the decision to run a cycling holiday business?

In looking at all of the possibilities for making a living, it became apparent to us that if you just do chambres d’hôtes, or if you just do gîtes, it doesn’t really raise enough money. We thought to ourselves: “How can you extend the season, to make it more viable?” And because James is a mad keen cyclist, we thought about cycling holidays. That sort of pre-dated the sudden explosion and interest in cycling, so we got on the bandwagon early – luckily – which has been great.

How did you find your property? What was the process behind the search?

We started looking on the internet, and looked for a very long time at lots of different properties. When we came over, we didn’t visit that many properties, as we were looking for something quite specific. We knew that we wanted to have a property with one end for family living, and the other end for clients, and a separation between the two. It narrowed the field quite a lot; searching for a property to renovate in the way that we wanted to do it.

Were you specifically looking for a renovation project?

Yes, because of my experience – as an interior designer, I was doing whole house refurbishments with builders and things. I trained as a project manager so it was within my capability to do something quite big, although not necessarily in French! After we made the decision, it was like being on a large catapult flying towards it, which meant very quickly having to sort things out. We had to get an architect and get on with the work, and the renovation. We did two years of a Grand Designs-style project and renovated what had once been an old farmhouse and a barn. The barn was in good working order, but just had an earth floor and a metal roof; that was all completely gutted and converted into guest accommodation, which now gives us five en-suite bedrooms and a huge great big open salonwhich is beautiful, and then the first floor is all open to the rafters. After that we built a 100-metre extension between the house and the barn, which is the kitchen and entrance hall, and the dining room. And in fact, this year we’ve just finished renovating our house, so our end is now as nice as the other end; for a long time it wasn’t! So it’s been quite a challenge really.

What was your level of French like when you first moved to Corrèze?

I thought it was okay; as I had school and basic tourist French I thought I’d be fine. I soon realised that wasn’t the case! I’m very single-minded and determined though, so I persisted. To start off with I understood maybe three words in ten, then four, then five. And now it’s more like 19 in 20 – you just have to fling yourself in and keep going. I always joke that I became president of the PTA because I didn’t understand the question when I was asked if I wanted to do it!

How did your boys find the transition?

William coped brilliantly with it. He went from year five (second to last year of primary school in the UK), to sixième, the French equivalent of year seven (first year of secondary school) because the age of the pupils is graded from the calendar year which runs January to December, compared to the academic school year in the UK, which runs from September to July. Because of various factors, he ended up re-taking that school year, which you can do here in France – it’s known as ‘redoubler’ and is quite commonplace, so he was able to catch up with himself, in a literal and linguistic sense. His younger brother, Ben, is more French than English. It was an easier age for him to make the transition and he’s got a lot of friends in the village. He has a brilliant social life, much better than he did in the UK.

What advice would you give to people who are thinking of living in France?

I’d say make sure you have a viable business plan and a very good idea of how you’re going to support yourself financially. It’s very different here in France with the social security payments, and you have to make quite a lot of money to cover your tax, as tax is 50%. We’ve met a lot of people who’ve come out here with random ideas – that they would sell candles, for example, and that would support them – but the reality is that you really need to make sure it will work. If you’re going to do it, jump in, embrace it and just go for it, but also qualify it before you do. Get as much information as you can, research your market as much as you can, and then jump. It’s great fun. It’s incredibly stressful, but it’s great fun and the lifestyle rewards are huge.

What are the lifestyle rewards?

I would say quality of life. We see friends more often than we would have done in the UK. We’ve integrated well into our local village, and I’m a local councillor now. On that note, people here are so welcoming and that’s very true of all Corrèze. There’s no standoffishness, just really warm friendly people. We have such a happy time down at all the village repas (meals) and various meetings. Everything involves lots of drinking, and lots of food, and lots of laughter. There’s far less materialism here. You’re not judged on what you have; it’s more about if you’re a hard worker, then you get a lot of respect.

Ah – that’s where it gets difficult! For seven months of the year we work a 16-hour day and there’s no respite. We have one night off a week. But then in the winter, for five months we don’t have that, so that’s when we catch up on all of that work/life balance. We see friends when we can. A lot of our friends here run similar kinds of businesses, so in April I’ll say to them “right, see you in October” and there’s no feeling of not being able to see them for ages. The kids are very involved and they help out. They’re both very chatty with the guests; they go out cycling with them and we get quite a few families too.

Our guest numbers really depend on the time of year. Last year was pretty good. We’re not full by any stretch of the imagination, but we’re comfortable now. We can take up to 13 people quite comfortably, but 10 is the optimum number. We’re also open for just B&B as well, so we have ‘normal’ people going through too. Corrèze is a great area for activity holidays, so often we organise kayaking and accrobranches (treetop rope courses). If you’ve got kids who need to be exercised, Corrèze is brilliant; the weather’s up and down. Generally it’s good in the summer but you have to be prepared. It’s not like Provence where you’re pretty much guaranteed permanent sunshine. There’s so little traffic as well, which is a great bonus.