Lost in the French landscape 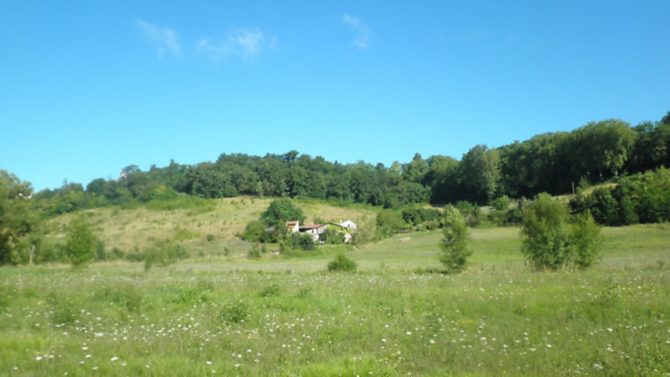 With plenty of room to move, not to mention some very affordable properties to move into, Cally Worden visits the hidden gems that tick a number of boxes

With more than double the land mass for the same population as the UK, France offers space to breathe in a way that is difficult to find on British soil.

Beyond the suburbs of the naturally bustling major cities lie swathes of open road, horizons that seem perpetually out of reach, and glorious landscapes where properties appear to sit placed with precision and care, as if to avoid disturbing the peace.

France is the leading European agricultural exporter, responsible for growing and rearing a massive 20% of the crop, dairy and meat products generated by the whole of Europe. All this requires land, and France is careful to preserve sufficient space to meet this continued demand.

The impact on the French landscape is dramatic. Everywhere you look there are fields scattered with lazy grazing cattle, serried ranks of corn standing proud, or gently rustling rows of wheat casting a golden glow in all directions.

Despite this dedication to farming, the urban areas of France have expanded by 20% in the last 10 years, with 77.5% of the population now living in the 22% of the land mass that is taken by towns.

This means that the remaining 78% of non-urban land in France is, by small degrees, becoming even less densely populated. This is great news for British property hunters who are seeking a tranquil haven a world away from the hustle and bustle of UK life.

Deciding where to go to find the space you crave can be a tough call, but one approach is to target those areas of France where the populations are limited. The following four should give you some food for thought.

Worthy of inclusion for many reasons, Lozère in the north of the Languedoc-Roussillon region enjoys the privilege of being the least densely populated department in metropolitan France, with only 15 people per square kilometre of land. A little-known area in British terms, it is in fact well served by flights from the UK into Rodez and Clermont-Ferrand. It is also within striking distance of the Mediterranean to the south.

Stunning green volcanic landscapes dominate the north of the department, rich in a wide variety of flora and fauna. To the south, the ochre glow from the warm rocks of the Causses and Cevennes, a national park and UNESCO World Heritage Site, make Lozère a fascinating, rugged place to both visit and live.

“Brits comes to Lozère to enjoy the hilly landscapes and the cheap houses,” comments Matthieu Cany of Sextant French Properties. “The department is generally overshadowed by the surrounding departments such as Hérault, which are more popular and more expensive. Consequently, Lozère is a delight just waiting to be discovered.”

House prices in Languedoc-Roussillon tend to be higher than the national average of €162,000, with an average resale price of €185,000 across the region. However, the average price in Lozère drops to just €100,000, making it the cheapest of the region’s five departments. Enough to send you running for your chequebook.

Matthieu Cany notes that “prices in the region have been relatively stable since January 2012, with a slight increase since February 2013”. An indication that Lozère may not remain hidden for too much longer, making now a great time to buy.

A region rather than a department, Burgundy is included here because three of its four departments rank in the top 20 least populated in all of France, with both house and land prices around 25% below the national average.

The space available in this part of France is vast, with vineyards, canals, lakes and rivers, and a pleasing blend of pasture and forested land creating an endless variety of treats on which to feast your eyes.

“British buyers come to the region because it is an unspoilt area. Farms are small here, which means the land has not been over farmed with the use of intensive chemicals,” observes Julie Lattimore of Burgundy Life Immobilier, situated in the very heart of the region in the Morvan regional natural park. “This part of the region is also cheaper than the wine area of Burgundy, and yet the famous vineyards are not too far away.”

Despite these attractions, Julie adds that many British people have never heard of the Morvan. “It is definitely a hidden gem,” she says. “We are located only an hour by TGV from the centre of Paris, and you can be in London within four hours. There are also very cheap flights with Ryanair from Stansted to Dole, which is about an hour’s drive away.”

Those lucky Brits who have stumbled upon the area are still benefiting from the economic climate. Julie comments that “prices have gone down over the last few years. People are putting in offers and getting very good bargains at the moment, although the market does seem to be stabilising”.

Budgets vary depending on what buyers are seeking, but Julie notes that buyers looking for a renovation project or old barn will usually have around €50,000 to €70,000 to spend. The average budget is usually around €150,000 to €250,000 for a renovated cottage, village house or country home.

The word itself can translate as ‘expensive’ in French, but the department is anything but pricey. With house prices well under the national level at an average of just €100,000, and building land over one third cheaper, Cher has much to offer the savvy bargain-hunter.

Liberally dotted with charming stone houses, and usable land plots that do not suffer from the steep mountainsides that can make building a challenge elsewhere, Cher has land and space in abundance.

“Cher is nestled between the Île-de-France, Limousin and the Burgundy regions, all of which are very popular among British clientele,” says Matthieu Cany. This is perhaps why the department has remained as yet relatively undiscovered. As prices in these other regions stabilise and start to rise, Matthieu discloses that prices in Cher actually decreased between April and November 2012.

Situated just two and a half hours south of central Paris, Cher is the 16th least densely populated department in France, and enjoys the 14th largest land area.

“The Cher department attracts Brits because it is full of history and the architecture is very popular,” says Matthieu. “It is ideally located, very close to Paris but rural at the same time, offering scenic and green landscapes as well as vineyards.”

With the airports at Tours, Clermont-Ferrand and Paris all serving Cher, this part of France represents a fantastic opportunity for an easy escape from the UK into the very heart of the country. You can lose yourself wandering aimlessly for hours in solitude, under the endless skies and among the rolling hillsides of this pretty department.

A generally flat landscape that borders the Atlantic coast, Landes is part of the popular Aquitaine region and is characterised by modern villas by the sea, and expansive farms and forests inland. Watersports draw the crowds to the coast with its 100km-plus of sandy beaches, and the mild climate attracts year-round visitors who come to wander along the 3,500km of landscaped footpaths that criss-cross the area, or indulge in a spot of gentle kayaking down the Leyre river.

Served by flights from the UK into Bordeaux and Biarritz only 90 minutes away, Landes also benefits from excellent road links that make it accessible from the northern ferry ports within a day’s drive.

Although it has the second largest departmental land area in mainland France, Landes is the 14th least densely populated, with only 42 people per square kilometre. Average property prices here hover just a little above the national level, at around €170,000, and building land is around 15% cheaper.

“Landes is very rural and, most importantly, prices are cheaper than in Dordogne, Gironde or Lot-et-Garonne,” comments Matthieu Cany. “It includes lots of pine forests and beaches, and the local gastronomy is one of the top attractions too. Prices in the Landes department rose regularly every year until the end of 2005 but are now quite static.”

Matthieu notes that most British buyers in Landes are looking to live here on a full-time basis, and this view is shared by Julie Savill of Beaux Villages Immobilier, an estate agency covering south-west France.

“Many people are looking for houses with some kind of income potential, and we have properties with gîtes, chambres d’hôtes, fishing lakes, nut farms and even an alpaca farm,” says Julie. “Prices have adjusted in recent years and with a wealth of property options available there has never been a better time for people to buy.”

STATE OF THE MARKET

Stabilisation seems to be the order of the day in the French property market as a whole, with the proposition of growth once again on the horizon. Matthieu Cany agrees, saying that “over the next six months the market should pick up. It is already doing so, albeit quite slowly, and with borrowing incentives better than ever the situation should only improve.”

Julie Lattimore agrees that the market is “peaceful but promising,” adding that “we all feel here that the situation will change over the next six to 12 months, and anyone buying property will be rewarded.”

Property has always been a safe long-term investment, but it appears that the sleepy backwaters of France may be awakening. As Julie Savill says, “people seem to share our feeling that prices won’t drop any lower, and want to get in while they can enjoy the good value”. What better incentive do you need?