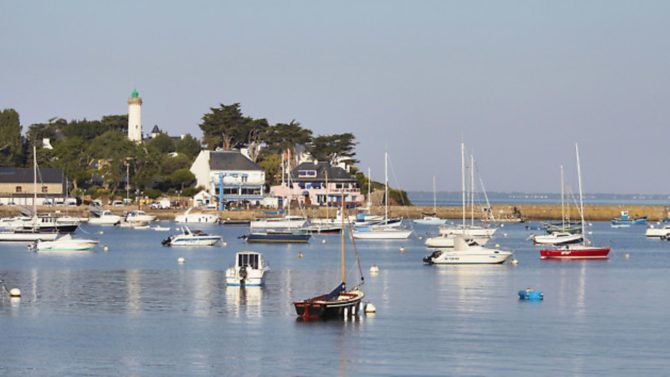 Experiencing the mildest winters in Brittany, the Rhuys peninsula proves to be a haven of peaceful ports, friendly markets and picturesque walks as Carolyn Reynier discovers

We drop anchor this month along the Côte des Mégalithes in Brittany to look at property on the Rhuys peninsula in Morbihan. The peninsula is bordered by the Atlantic Ocean to the south and the island-studded Gulf of Morbihan to the north.

Our first port of call is Dominique Vanard who returned to her roots from Paris 14 years ago. A former maire of St-Gildas-de-Rhuys, a village on the Atlantic side of the peninsula, she lives in her old family home at Kerfago, the hamlet closest to St-Gildas’ little Port aux Moines.

“Being in southern Brittany, it rains less here than in the rest of the region,” she says, “and thanks to the peninsula’s mild climate, gardens are full of olive trees, lavender and even palm trees.”

Dominique says that paths have been developed throughout the peninsula to attract walkers and cyclists who are interested in nature and exploring the countryside. There are 33km of coastal paths and you can discover the peninsula’s flora and fauna on numerous walks described in topographical guides.

“We are lucky to have beautiful cliffs including those of the Grand-Mont at St-Gildas itself and lovely little spots, too, on the Gulf side,” she says. “We go to the Atlantic coast for bracing walks and the Gulf side if we fancy a more gentle ramble protected from the winds.”

Dominique tells me that the Port du Crouesty is the second largest marina on the Atlantic coast in Brittany after La Rochelle, adding that she meets quite a few British visitors who arrive by boat.

As well as the port at St-Gildas there are other small ports dotted around the peninsula – at Kerners-Bilouris and Logeo on the Gulf side, for example, and at St-Jacques on the Atlantic side – where mariners can tie up or call in on their tour of Brittany.

Watersports enthusiasts can sail around the Gulf of Morbihan and visit some of the islands, such as the Île-aux-Moines, Île-d’Arz and other smaller islets. If birdwatching is more your thing, make sure to head for Duer and the réserve ornithologique in the south-east corner of the Gulf.

Succulent seafood and plenty of savoury or sweet crêpes bretonnes are the order of the day, and there is no shortage of beautiful markets where you can buy local oysters and fresh produce grown by market gardeners.

Every December in St-Gildas, an event called le Noël des Anglais is organised by a small British community and takes place in the Romanesque abbey church which celebrated its millennium in 2008. To the east stands another important part of the peninsula’s heritage, the Château de Suscinio, an early 13th-century Benedictine priory, which later became a residence of the Dukes of Brittany.

St-Gildas remains a real family village in a tranquil setting, and is a hidden gem that is well worth exploring. Christian Falhon at Agence Century 21 in St-Gildas markets properties throughout the commune which runs north-west to Le Net, near Tumiac, and east to Le Cossay. Fishing hamlets are scattered around the commune, including La Villeneuve, Le Grand Mont and others with Breton-sounding names like Kéraudren.

In the village centre, early 20th-century terraced stone houses, with street façade and small gardens, were constructed on three levels and prices range fom €200,000 to €350,000 depending on the property’s state of repair. Some have been divided up into apartments with studio flats starting at around €40,000.

As in most places, fishermen’s cottages in the hamlets are smaller and are priced up to €250,000. You can still find cottages in need of renovation and these market at around €180,000. More modern properties, which you can find further away from the village on the road to Sarzeau, are also available and you should expect to pay €350,000-€400,000 for one with a swimming pool.

If you want a sea view you should head to places like Les Govelins or Kerpont north of St-Gildas, or Kercambre to the south; there are also attractive properties overlooking the Atlantic at the Port aux Moines. You will, of course, pay considerably more for these maisons vue mer and a 130m² home with a lovely sea view recently sold for €650,000.

Perennially popular Port-Navalo is located in the small commune of Arzon. “Port-Navalo properties are more typically Breton than those of Arzon and the much more recent 1970s housing of Port du Crouesty,” explains Régis Vacher at Cabinet Bénéat-Chauvel.

Port-Navalo has lovely beaches and a typical old fishing port. “Boats entering the Gulf of Morbihan to visit the islands have always had to pass by here so this is an older sector with more fine properties than the rest of the commune,” Régis explains.

The starting price for a little fisherman’s cottage in the village is around €300,000. A considerably larger sum will be removed from your wallet for top-end properties. Cabinet Bénéat-Chauvel is currently marketing a 1930s home with 220m² of habitable space, small steps giving direct access to the port and beach and panoramic views – and you won’t get any change from €2.5m.

In days gone by, fishermen may well have fished in the Atlantic but they built their houses on the much more sheltered Gulf side, protected from ocean winds. Here in homely hamlets you find either small fishermen’s houses or larger maisons de capitaine. Prices are similar to Port-Navalo, climbing to over a million euros for homes with sea views.

Many of these Port-Navalo properties are second homes. In Arzon they tend to be main residences, with prices ranging from €300,000 to €800,000. There are some apartments, but if you want to be in a modern residential building you need look no further than the Port du Crouesty, created in the 1970s on the Atlantic coast. Here, one-bedroom apartments with sea views start from around €200,000.

If you are a keen sailor and thinking of trading in your tub, the annual second-hand boat show Salon Nautique Mille Sabords is held at the end of the season at la Toussaint.

Today, Régis says he sees fewer second home buyers. “We are lucky enough to have local activity and lots of shops, so we have Parisians deciding to have their main residence here, as well as British buyers,” he says.

He confirms that, although a beautiful house in lovely grounds with views over the Gulf or ocean in Sarzeau or St-Gildas-de-Rhuys will command similarly high prices, in general Port-Navalo is the most sought-after sector on the peninsula.

The neighbouring commune of Sarzeau extends from the Gulf of Morbihan in the north to the Atlantic Ocean, explains Sébastien Chevalier at Agence Clos Salomon. You can find fishermen’s cottages, properties with sea views and residential apartments.

As a general rule, a fisherman’s cottage is not large, he explains, and will have a living area, two or three bedrooms, and a little bit of land. You find them mainly in surrounding hamlets like Bénance, Fournevay and Brillac to the north close to the Gulf, and on the Atlantic side in places like Suscinio and Kerfontaine on the Pointe de St-Jacques. Prices are around €230,000, depending on size.

In Sarzeau, terraced houses with a bit of land at the back, similar to the fishermen’s cottages but taller, are much sought after and sell for around €280,000. He says more and more clients today are looking for modern homes. However, because so few of these houses come to market, clients tend to buy land and build on it. Land prices can vary from €100-250/m².

Over 70% of his buyers are in the market for second homes. Traditionally they come from Paris, Rennes and Nantes, but he is now seeing more clients from other towns, although few foreigners. He says that Port-Navalo is the priciest sector historically, and that there is something of a housing bubble there because of its popularity.

So as we weigh anchor and sail off into the sunset with the wind in our hair and the tang of sea salt on our lips, I hope this gentle voyage along the Rhuys peninsula has given you a flavour of what life can be like in beautiful southern Brittany.