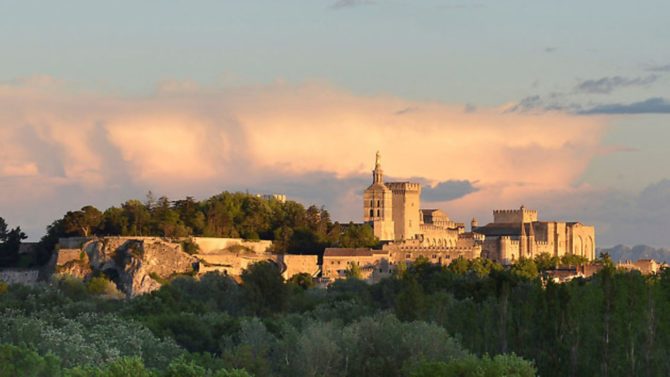 Exploring the bustling squares, quaint streets and ancient churches of Avignon, Carolyn Reynier discovers there is something rather heavenly about Provence’s city of popes

My sister and her husband have overlooked Rutland Water in rural Rutland for 30 years, so it came as a surprise to me, when thinking about moving to Provence, that they should choose to concentrate their search within the city walls (intra muros) of Avignon, over an hour from the wonderful views of the Mediterranean Sea.

Having spent several short holidays travelling around the area, however, they decided the town had a lot to offer, was easily accessible, and fortuitously found a three-bedroom apartment with garage in a building just off the Place du Palais des Papes. In Avignon, you cannot get much more central than that.

Over the last couple of years, they have spent part of each month in the city and have seen the townscape through the seasons – when it is busy during festival time, when the Mistral wind is blowing, when the sun beats fiercely down. When I visited them shortly after they moved into their apartment in February it was even snowing.

After decades of having to get in the car to go anywhere, they are now discovering the joys of being able to walk to the cafés and restaurants, or to the theatre and cinema. Bill saunters down to the Place de l’Horloge each morning to buy his newspaper and sit in the sunshine with a coffee before coming back with the croissants for breakfast. They both work from home and can easily pop out for a mid-morning coffee break or a quick bite to eat at lunchtime.

In the evening, they often head to the Utopia to watch British and Hollywood films, and also enjoy going to the ballet and have seen a French version of My Fair Lady at the theatre. At weekends, they drive up the Mont Ventoux, canoe down the Ardèche or head over to Arles for one of the Férias. They also love the mountain ranges of the Luberon and enjoy driving through the Châteauneuf-du-Pape vineyards to buy a few bottles from Madame Thoumy’s small domaine which was recommended to them by their plumber.

My nephew and niece, in their late twenties, are regular visitors for long weekends. Being outdoorsy types, like their parents, they like to jog over the bridge to the La Palmeraie open-air pool on the Île de la Barthelasse, which is opposite the Palais des Papes and the Pont St Bénezet. They also bring their friends and recently, keen cyclist Nick arrived by train with his bike to cycle up Mont Ventoux (1,912m), one of the renowned stages in the Tour de France. There are two ways to the summit – either you head up from Bédoin and back down to Malaucène or vice versa – so Nick cycled them both on the Saturday… and then did the same on the Sunday. I did say he was a keen cyclist.

To find out about the Avignon property market intra muros I talked to Guillaume Laplaud at the Agence du Centre who told me that one can find both apartments and terraced houses inside the walls. The latter are either townhouses or what the French call hôtels particuliers, which he translates as mansions. Being inside the ramparts, the buildings are old with most dating from the 17th century although some have remnants going back to the 14th and 15th centuries.

Many of the houses were built around small gardens or courtyards, and you can get an idea of these small spaces if you have a look on Google Earth. So you will have some outside space to sip your pastis.

If you prefer to stroll along to the nearest café for your apéro you could pick up a small one-storey 60m² house with no outside space and requiring work for €149,000.

For larger two-storey houses in good condition, you should budget €450,000-€600,000. One such property is a 177m² restored four-bedroom townhouse with interior courtyard and terrace near the pretty Place St-Didier, on the market for €575,000.

And if you really want to push the boat out, you can pick up a hôtel particulier for €1m to €2.5m. These generally come with a large courtyard or garden.

All buildings inside the ramparts are in a conservation area (en secteur sauvegardé) and are subject to strict regulations when it comes to building works. The Bâtiments de France architects must inspect the site and approve the building permits, and while this will generally not cause any issues in the cases of small terraces, you may find they are stricter on renovations of hôtels particuliers.

The 14th-century builder-popes of the Palais des Papes were blessedly unburdened by such constraints; Pope Benedict XII and his successor Clement VI presumably did what the hell they liked. However, today their palace is on the UNESCO World Heritage List so you cannot and there may be further constraints applicable in certain streets around it.

If you are looking for more modest accommodation, you can buy a studio in an old building for €55,000 to €75,000 and a one-bedroom apartment for under €100,000. For example, in the Teinturiers quarter in the south-east, there is a renovated two-bedroom apartment on the market for €235,000.

Although it is unusual to find small apartments with balconies or terraces, Guillaume Laplaud is currently marketing a one-bedroom apartment with a 30m² terrace in the Banasterie quarter behind the Palais des Papes. It does need work and will cost you around €110,000 to buy it.

He explains that if you have a car and live within the walls, you can pay a fee of €49 per year which allows you to park in bays without feeding the meters. If you live in one of the sectors closed off by automatic bollards you can apply for an access card. Otherwise, there are car parks at most of the strategic points in the town, and you can buy a season ticket.

Not everything is ancient in Avignon. Most modern buildings are in the Balance quarter between the Pont d’Avignon and the Palais des Papes (entrance through the Porte du Rhône). This area was partially demolished and rebuilt in the 1970s.

Although some apartments may have a river view this is not necessarily what buyers are looking for. “It’s a view of the palace that people want; a view of the river means you have the noise from the road around the ramparts,” Laplaud says. You find other modern apartment blocks around the Boulevard Raspail in the south-west of the town. These 1970s buildings are more practical, and come with lifts, garages and small terraces; apartments are priced at between €2,400 and €3,000/m².

For the investor, there is a lucrative seasonal rental market, and not just for the Festival d’Avignon in July. There is demand for well-presented intra muros properties throughout the year, particularly from March to October. For example, a one-bedroom apartment costs around €550 per week in July.

You should have no trouble finding long-term tenants either, given that there is a TGV station nearby. Expect a return of 6-8% on your investment. If you are tempted by a long-term let you would receive around €500 per month for a top-floor apartment.

Although properties with views of the palace will always command a premium, the most sought-after sector – where the price per square metre is the highest – is the residential quarter of Joseph Vernet in the west of the town. Here you find fine 19th-century hôtels particuliers and accompanying upmarket boutiques. The nearby Place Crillon, located close to the Porte de l’Oulle, is another upmarket area. To the east there are some fine apartments in the Banasterie quarter and around the Place St-Didier.

Geographically, Avignon is very well placed, explains Mr Laplaud. “We are an hour away from the nearest beaches at Les-Saintes-Maries-de-la-Mer in the Camargue and a little further from the Cassis Calanques,” he says. “When it snows, there is skiing on Mont Ventoux just an hour away, or you can drive an hour or so further to the popular resort of Villard-de-Lans on the Vercors Massif.”

Travel links to Avignon from the UK are excellent, especially with the direct train service from London St Pancras during the summer months. Depending on the time of year, you can fly from London City to Avignon, or from Luton to Nîmes, which is a 45-minute drive away.

The TGV station a few miles outside the town brings Avignon within easy travelling distance for Parisians who buy second homes, sometimes with a view to retiring here later on.

Limited to arriving by less sophisticated modes of transport, nine popes lived in Avignon during the 14th century for essentially political reasons, making the city the capital of Christianity at the time. The last two were schismatic popes who reigned in Avignon simultaneously to a pope in Rome during the Great Schism of 1378-1417.

As you might imagine, the number of churches and cathedrals means lots of bells, which strike the half hour and, helpfully, as in most French towns, strike the hour twice in case you were not listening the first time.

Still, stocking up on ear plugs is a small price to pay for having a home within Avignon’s city walls and, if you are still a Doubting Thomas, I refer you to the dogma of papal infallibility. Surely, nine popes can’t all be wrong.