Learning French at a language school 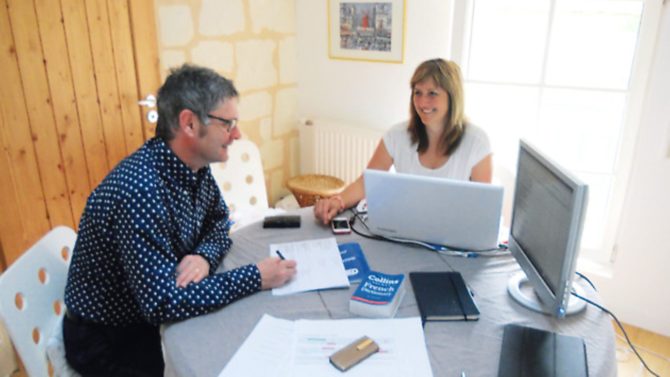 Despite having lived in France for 10 years, my French is still poor. My excuse is that I work in the UK every week, but also my French family doesn’t help. “We need one day a week where we speak French at home,” I declared. “So that I can learn.”

“But Daddy,” replied my eldest son, nervously. “When you’re at home, we want to understand you.”

Clearly, I needed expert help and the Parfum de France language school in the small Loire Valley town Fontevraud-L’Abbaye seemed ideal. The school offers residential courses for individuals and groups, from beginner level to advanced. Pitching my level somewhere between these two, I booked a short intensive course. I’d taken a written ‘exam’ sent through by the school beforehand to gauge my skill levels, which was fairly straightforward. Admittedly, I may have asked my nine-year-old to translate some bits, but it’s conversational French that lets me down, to the extent I was nervous even about my arrival ‘at school’.

I needn’t have been. A beaming Sylvie Reeves (founder and director) greeted me at the door; a steaming cup of tea in her hand. Sylvie showed me around the school – actually her home which she shares with her English husband, Mark – and the gîte, which sleeps up to six people. We chatted in the quiet garden, all in French; her clear accent (which the Loire Valley is known for, much like Oxford for students of English) and her patience gave me the confidence to talk and feel less self-conscious about making mistakes.

Sylvie outlined the intended programme, which would involve morning lessons, ‘homework’ and visits to local tourist sites to put my new skills into practice. It would be a hectic few days; ‘intensive’ being a very accurate description, but the first lesson was more enjoyable than I’d been prepared for as Sylvie’s interactive teaching method, together with a wealth of resources and exercises, began to build on my limited skills. The ‘knuckling down’ reality of school days was the focus of the afternoon – after a delightful lunch in a nearby restaurant – after which we were given a guided tour of the Saumur-Champigny vineyards by Vanessa Godfrin, of Le Secret des Papilles organisation dedicated to the education of wine, followed by a tasting. We then went to the Combier distillery and learnt with a French language guided tour, about the chequered history of absinthe and its production.

Sylvie was formerly head of the language department in the Saumur chamber of commerce and those skills, in particular the contacts gained, are very much a feature of the course. Over the few days that I spent ‘at school’, I visited the medieval troglodytes of Sauzay-Champigny; was given a tour of the massive subterranean caves of wine producer, Louis de Grenelle, conducted by Étienne Bodet, grandson of the owners, and followed by another tasting; and a personal tour, by Lydia Labelette, directrice d’innovation, of the stunning Abbaye de Fontevraud.

Opposite the school is La Licorne, a traditional restaurant gastronomique, where on my last evening, Sylvie, Mark and I discussed my progress. My French had indeed improved in a very short time, and I was leaving with a renewed confidence, eager to put my new skills into practice. More than that though I felt, despite the workload, that I’d actually had a holiday too. Languages aren’t as popular in schools as they used to be, so maybe this is the way forward: more wine-tasting…

www.parfumdefrance-fr.comNo time to attend a course? Try our tips for beginners, intermediates and advanced French learners that you can fit into a busy day