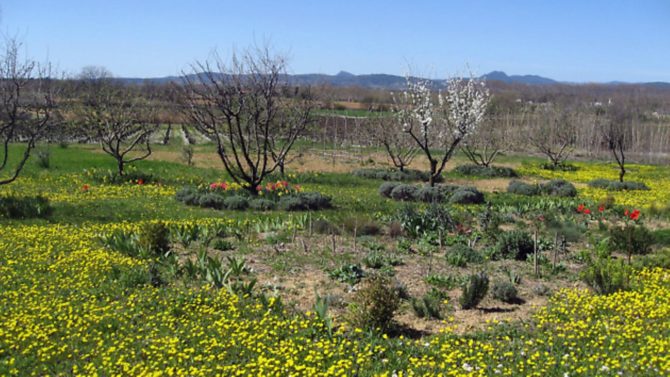 Jackie Herald discovers how you can use your ‘leisure plot’, known in France as a ‘terrain de loisir’

Ever thought of buying a terrain de loisirs? The peculiarly French phenomenon of buying a plot of land separate from your house can be a source of confusion to us Brits. It sounds like a plot for relaxing in, however, fathoming out permissions for its use, how long you can spend there, and what you can build and plant on the site can be a headache!

Existing and former uses of the terrain will largely affect what you can do, and how you might adapt it to your ideal leisure space.

You could create a garden, turn self-sufficient and grow your fruit and vegetables there, use the plot as a weekend and holiday place for chilling out. You might subdivide the terrain into individual camping or caravan plots – though there will be strict limits on numbers, and if the site is going to be shared, you’ll need to distinguish clearly between individual spaces and the communal areas.

If the terrain is designated as productive agricultural land, you will most definitely need to consult the local commune to find out whether you can change it to leisure use. Similarly, if it is surrounded by working farmland, vines or suchlike, you’ll need to be aware of the impact that your activities – especially groundworks and planting – may have on the adjacent productivity.

Then there’s the matter of conservation and biodiversity; your intervention could potentially turn a neglected piece of land into a haven for local flora and fauna, to the benefit of all.

Before you buy, check the limite de la zone constructible – even if the plot is large, you might have very limited development rights. The plan local d’urbanisme (PLU) is available at the mairie and will tell you whether the plot is a terrain de loisirs. This usually means you cannot build anything solid, though you might be permitted a demountable or moveable structure such as a chalet, shed or caravan. As always, double check the boundaries, rights of way and access too.

As with prospective house purchases, the starting point for your terrain hunt may begin online or directly through a local estate agent. The difference being that you’ll probably be sold a relatively blank canvas – no 360-degree virtual walk-through. Instead, it’ll be the bare minimum of the surface meterage, a little detail of location, and what utilities are on site.

It should also be made clear at this initial stage whether there are any existing structures. If there’s a pigeonnier or a barn, especially if they are solid – made of hard materials such as stone walls, which cannot be classified as dismountable, or moveable – then you’re in with a fighting chance of being able to convert it into a résidence secondaire.

Not surprisingly, the best kept secrets (aka parcelles) are exchanged between family or friends. Terrains are often acquired by a land swap or coming to an arrangement with a neighbour, relative or friend of a friend. If you know what you’re looking for, put the word out on the grapevine – although difficult to do discreetly, prospective purchasers are increasingly posting their search requirements online.

off the beaten track

After a scenic afternoon’s drive via the A75 and a rough track, I found myself relaxing with a petit verre in the tranquil garden of Catriona McLean, taking in the uninterrupted views across the Hérault valley. When she and her husband Charles moved from Scotland to an apartment in old Montpellier, they soon scouted for a terrain de loisir out of town, from which to create a garden.

The result: a 3,000m2 “squinted rectangle” of old vineyard, bordered by wild garrigue, an olive grove and the canal which is operated by the Syndicat des Canaux de Gignac (the nearest market town). A team of contrôleurs (one man for every few kilometres) is responsible for the upkeep of the canal and its series of locks and diverters to tributary ditches that irrigate the offset vineyards. The canal is drained in winter between the months of October to March when growers rely on rainfall and harvested water tanks.

Catriona and Charles had inherited some decrepit and rather drought-ridden apple, cherry and plum trees, a few exhausted vines (for dessert grapes) and a lot of weeds. In one corner was a little enclosure of pines sheltering a cabane (shed) and an old caravan left behind by the previous owners on a tarmac area surrounded by an overgrown Cypress leylandii hedge. This provided much-needed protection from the winds, and shade. The previous owners visited once a year in the summer but didn’t pay much attention to the plants.

In the first winter they set about preparing the site. A local farmer and his tractor were persuaded to rotivate the land to be planted. This removed years of wild grass and deep-rooted garrigue weeds. It also uncovered thousands of small scilla and wild orchid bulbs that popped up in the following spring. One of Catriona’s first tasks was to prune the fruit trees, grade a ring of earth around each to attenuate the water, irrigate like mad and dose them with bags of manure.

This also paid off the following year, when the trees and fruit perked up. She bought lavender and buis (the local term for Buxus sempervirens) at the market, and planted in circles around each of the fruit trees.

Next, Catriona created a grid of long rectangular beds. Each has little paths cutting through laterally – just an easy wheelbarrow width, defined by woven canes of local bamboo, la canne de Provence, which grows wild along the canal banks. They also planted a grid of 25 olive trees spaced at the traditional distance of five metres – all local varieties purchased from nearby nurseries. The garden is now nine years old, and the olives are all mature enough to bear fruit.

In the enclosed area beside the cabane Catriona and Charles erected a greenhouse. To this they have now added a small polytunnel for overwintering fragile plants such as citrus trees and salvias.

They also built a pergola of wooden beams around the cabane, up which now grow roses, honeysuckle, clematis and wisteria. This has created a cool shady area under which to relax and entertain friends. There are butts at every corner of the cabane and greenhouse to collect rainwater. This has proved essential during the winter months when the canal is empty.

For Catriona, gardening is low budget so placing plants close together foregoes the need to purchase any gravel or other mulch. She mostly sources locally: wild orchids were salvaged from nearby grubbed up vineyards, wild hellebores and euphorbias are gathered from the hedgerows, and thyme and rosemary (extremely tough and wiry) from the garrigue. Planted around the edges of the beds, dwarf wild white iris, very early to flower, are multiplying happily but wild lavenders are more difficult to propagate from.

As well as monitoring the successes and failures of plants, Catriona and Charles are fascinated by the wildlife attracted to the garden. The list is rich and long: fabulous green beetles, hundreds of butterflies, snakes and an especially striking lizard – green with blue spots. The name, Jardin des Rossignols, speaks for itself, as the male rossignols (nightingales) sing their little hearts out in the mating months of June and July.

The only real wildlife problem Catriona and Charles admit to is “the millions – and we mean millions – of snails of all colours, shapes and sizes that live alongside us in the garden. Some eat and devour, some just hang on the stems for pleasure. As this is a wild garrigue garden in the vineyards, we cannot control the snail population at all. We just hope there are hedgehogs, birds and small animals that like a tasty dinner from time to time. We have now grown to enjoy finding different sorts with different markings”.

Now transformed from a neglected terrain de loisirs, the Jardin des Rossignols (www.jardindesrossignols.com) is a delight to observe – a little bit of paradise as it changes character and scale through the seasons.