Jewel of the Jade Coast 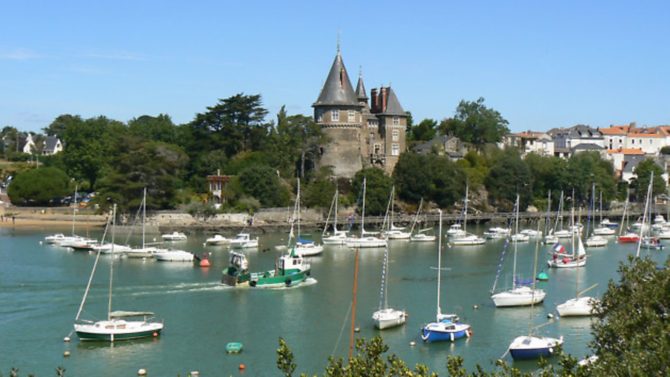 Carolyn Reynier visits the fishing town of Pornic, an intriguing gem in the Jade Coast’s crown, and explores its historic ports, clifftop views and vast range of properties

The Pays-de-Retz lies to the west of the city of Nantes and is bordered by the Loire river and the Atlantic Ocean. This stretch of the littoral is known as the Jade Coast, which gives you an idea of the colour of the water. Here beach and nautical activities reign supreme as does the charming seaside resort of Pornic which, incidentally, produces those little bols prénoms you see everywhere in France; you know the ones, with every Christian name but the one you’re looking for.

On the clifftop, the medieval old town and its château look out over the bay of Bourgneuf towards the Île-de-Noirmoutier, famous for its natural coarse sea salt, and onto boats bobbing about below.

Mesolithic man set up shop on the nearby Sainte-Marie cliffs, where much later, after 700AD, the monks of Saint Philibert de Noirmoutier built a priory. Over the centuries the area was constantly changing hands; in 1342, an English captain governed the Pays-de-Retz; in the 17th century, ships in the bay were attacked by pirates and Turks. Come the 1700s, things seemed to have calmed down and Pornic became an important fishing port, primarily harvesting Newfoundland cod, with the associated shipyards and chemin des douaniers (coastal paths) to help customs officers in their fight against the smugglers.

By the second half of the 19th century, with the arrival of the train, Pornic had become a popular ville balnéaire (seaside resort) frequented by various folk including the writer Gustave Flaubert (with or without his parrot is unclear), Pierre-August Renoir (a small shaded garden named after him overlooks Noëveillard beach) and architect Charles Garnier (famed for designing the Paris Opera House and the casinos at Monte-Carlo).

This is the period when splendid bourgeois seaside villas were built between Pornic and Sainte-Marie and the Gourmalon quarter. A few decades later, the chapel of Notre-Dame, inaugurated in 1909, was built by the inhabitants of Gourmalon, against the wishes of the local clergy, who found it difficult to get to the church due to the Ria de Pornic, the town’s untamable flood plain.

You will find graves of Commonwealth soldiers in the British cemetery in Pornic, and also at Sainte-Marie and Le Clion-sur-Mer, following the sinking of the Lancastria in the Loire estuary by the Luftwaffe in 1940 with the loss of over 4,000 lives.

Numerous blockhouses were built along the coast, part of the Mur de l’Atlantique, the name given to Hitler’s huge coastal defensive structure which was designed to repulse any Allied attack. Pornic was liberated on 11 May 1945 by the French forces three days after the German capitulation.

For the lover of vieilles pierres the Tumulus des Mousseaux, a chambered tomb constructed around 3,500BC, lies to the west of Pornic, while on the coast to the south, towards La Bernerie-en-Retz, you will find the megalithic graves of Prédaire and Joselière.

In the medieval church in Le Clion-sur-Mer, campanologists can admire a rare 1857 chiming mechanism enabling the bells to ring out the complete octave, thus making possible renditions of Ave Maria. Although there were 17th- and 19th-century alterations, the massive tall square tower dates the church to the 14th century, possibly earlier. Known as a clocher-porche, a bell tower with bell room on the top level, and a porch at ground level with access to the church, it most likely served as a watchtower towards the Haute-Perche river.

At the entrance of the estuary the Noëveillard marina provides safe moorings for mariners, sheltered from the prevailing westerly winds. Here, too, linking land and sea, sea and marshland, the ria has been reclaimed; the 13 hectares of the Ria Botanical Park are bringing back to life the exotic plants brought here by the boats of bygone days.

Fishermen head north to the Étang du Gros Caillou, a vast 450,000m² man-made reservoir towards Saint-Père-en-Retz. During the season you can fish for pike, perch, sander, carp, eels and roach, from dawn to dusk.

For a magnificent panorama of the bay of Bourgneuf and the Loire estuary, follow the coastal footpath to the Pointe de Saint-Gildas, the peninsula west of Pornic.

Although the heyday of sardine fishing is past, the pêcheurs still bring in some fine catches of red mullet, sea bass, prawns and elvers. Head straight for the Le Croisic criée, the fish auction market, to sample the very  best seafood.

Oyster lovers should meander down the coast to the small port of Le Collet just south of Moutiers-en-Retz where they are raised in the Dain. And what better to accompany them than a crisp dry white wine? The Pays de Retz vineyards are planted with muscadet, grolleau and gros plant, a particular favourite of mine.

Who says ocean, says islands. The Île-d’Yeu, with its long beaches and coastal dunes, low houses with tiled roofs and colourful shutters, lies 17km off the Vendée coast to the south.  To access the Île-de-Noirmoutier you have to take the passage du Gois, only passable at low tide. If you miss the tide back, then you will have more time to explore its beaches, forests, ports and marshland.

According to the mairie, Pornic has a diverse economy which has benefited from dynamic business bosses, often local lads from the Pays de Retz. Although there are three supermarkets on the outskirts, the animated town centre remains home to over 150 businesses, and there is no shortage of artisans providing a range of services. You can also have a flutter at the Casino du Môle, relax at the spa centre or play 18 holes of golf.

Returning to shore from the deep brings us to Marc Tessier and the aptly named Agence des Flots in Pornic, and in existence since 1989. He covers property along the Jade Coast and an inland radius of 20km which takes in Saint Michel-Chef-Chef to the north-west, famous for its galettes (savoury buckwheat pancakes), Chauvé to the east and down the coast to Moutiers-en-Retz. As well as sales transactions and annual lets, the agency also deals in seasonal rentals with around 140 houses and apartments on their books.

The market, he explains, divides into various sectors: the seafront, historic town centre, Pornic outskirts where buyers tend to be the local working population, and the villages and hamlets in the surrounding countryside. There are few seaside residential apartment buildings and the town’s property market is essentially made up of house transactions (over 90%).

“The coast here is rather rocky, made up of little beaches with a relief that has saved us from seafront apartment buildings you find at places like La Baule,” says Marc Tessier. There are some small résidences but you really have to look for them, as well as some old houses that have been converted into apartments.

The most sought-after sectors are, of course, along the seafront and close to the centre which is in walking distance of the beach. You should expect to pay around €90,000 for a simple studio; a 50m² apartment right on the seafront with direct access to the beach will cost around €300,000.

The starting price for a small house in a similar location will be around €600,000, while a fine seafront villa could set you back between €2m and €3m, and perhaps more.

Seafront quarters to check out include Noëveillard, Gourmalon and La Birochère, all of which are within a kilometre of Pornic centre. The closer you get to the historic centre, the older the buildings. You could find an old 80m² two-bedroom terraced house, perhaps with a small courtyard, for around €230,000.

Although less popular, the countryside property market remains active, attracting a different buyer, explains Mr Tessier. Here, you are spoilt for choice as the commune has many villages and hidden hamlets to choose from.

Some houses have been built comparatively recently as high coastal property prices have pushed people inland to purchase plots and build their own home. As an example, a 630m² plot close to the beach at La Bernerie-en-Retz is on the market for €139,000; move inland to Chauvé and you can buy a countryside plot of 1,500m² for €85,000 but it is non viabilisé. This is a crucial expression to note if you are thinking of taking this route (it means there are no mains services).

Depending on whether you are in the centre of a village or on the outskirts you can currently find properties with up to 3,000m² of land, although if you need more you may also be able to rent or buy a nearby field from a friendly farmer. However, Mr Tessier finds that buyers today are less concerned about having large acreage. Much as they like the countryside they are scared off by large amounts of land and the upkeep involved.

Although most of these old stone properties have been restored you can still find some for renovation priced around €150,000-€200,000.

Mr Tessier says that Pornic has an increasing number of principal residences (or semi-principal with owners living here for more than half the year) thanks to the proximity to the large conurbations of Nantes and Saint-Nazaire. For a small town there is also a good infrastructure, and there is a station, recently built hospital and a brand spanking new lycée.

The second-home market is still active, although less buoyant due to economic conditions. Buyers are mainly French, but he does have a few British clients who are attached to the region, with some of them settling here permanently.

The resort is vit à l’année (an expression to remember if you do not wish to find yourself  in a place where everything closes up in the winter). Pornic is astonishingly dynamic for  a town of just 15,000 inhabitants. The protected littoral offers wide, wild spaces by the sea, and a 14km path runs along the coast. The area offers a clement climate, with mild winters and warm summers.

To get to the Pays-de-Retz, Saracens and Vikings sailed into the bay; today, you can come by car along the A11. The nearest airport is Nantes Atlantique, half an hour from Pornic, and there are daily train services between Pornic and Nantes where TGV connections take you to Paris or Lille.

If you are considering buying a permanent home in this area, it may be worth renting out of season to get a feel of the place. You would pay around €250/week for a small house within walking distance of the beach.

Although there is a good rental market in high season, this should really be seen as a sideline rather than an investment opportunity, says Mr Tessier. It might not be the perfect place to invest your pennies if you don’t plan to live here a goodly part of the year, but once you have had a peek in Pornic I can’t imagine why you’d want to live anywhere else. After all, this is the hidden jewel of the Jade Coast.