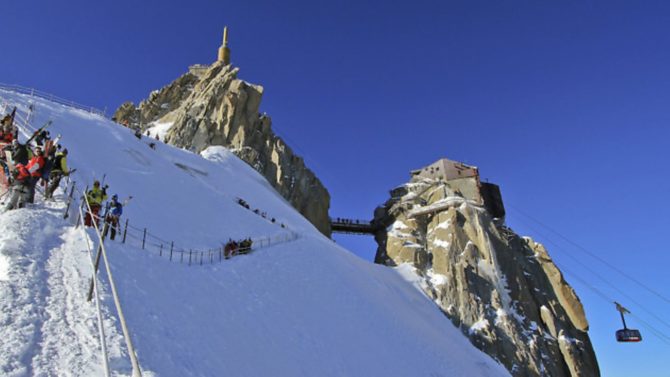 The biggest property developer in the French Alps has unveiled plans to build its first ever five-star résidence de tourisme in the ski resort of Chamonix-Mont-Blanc.

The MGM Group’s Résidence Cristal de Jade will be the first of its type to achieve this rating in the town, one of the oldest ski resorts in the French Alps which hosted the world’s first Winter Olympic Games some 90 years ago.

It will occupy a site of just over half a hectare (about 1.2 acres) at the foot of the Aiguille du Midi cable car which lifts skiers to an altitude of 3,842 metres and a 360-degree view of the French, Swiss and Italian Alps.

The résidence – the biggest new development in Chamonix for many years – will form an integral part of the creation of a new quartier (district) on the southern edge of the town.

“Our scheme is the last piece in the jigsaw resulting from the sale for development of parcels of land owned by the operator of the Aiguille du Midi cable car in order to fund a €470 million renovation and modernisation programme,” explains Richard Deans of MGM’s UK sales office in London’s West End. “The aim is to enhance the visitor experience for more than a million skiers, walkers and climbers who use the lift all year round.”

MGM’s new résidence will comprise three traditionally-styled four-storey chalets which together will contain 56 apartments ranging in size from one-bedroom to four-bedrooms. All those with two or more bedrooms will have two bathrooms, one of which is en-suite to the master bedroom.

The apartments come with use of a private garden, underground parking, cellar storage, locker rooms, laundry and drying rooms. Facilities within the résidence will include indoor pools for adults and children, a fitness suite, gym, sauna, jacuzzi and steam rooms, as well as an Ô des Cimes spa and beauty centre with a variety of massages and treatments on offer. A free WiFi service will be provided throughout the new résidence.

For Résidence Cristal de Jade to meet the five-star standard set by Atout France – the body responsible for promoting the development of the country’s tourism industry – MGM’s scheme had to match more than 200 stringent criteria relating to the size and quality of the accommodation and facilities, as well as the range of hotel-style services provided for use by the owners and occupiers of the apartments.

Shops and restaurants are on the doorstep of Résidence Cristal de Jade. Many more are within a ten-minute level walk to the historic town centre of Chamonix, situated beneath the 4,810 metre high Mont Blanc, the highest peak in the Alps.

Construction of Résidence Cristal de Jade is due to get underway in the spring of this year with the apartments being ready for occupation during the summer of 2016.

These prices, which include underground car parking, cellar storage, use of locker rooms and drying rooms, exclude French VAT at 20% which is waived under the leaseback scheme.

The ski resort of Chamonix

Located at the foot of Mont Blanc and boasting four main skiing areas, Chamonix is more than just a ski resort; it is a cosmopolitan town offering accommodation of all types, three Michelin-starred restaurants, several museums, shopping, après-ski night life and a big sports centre.

Recent improvements to facilities for winter visitors include a natural ice rink, the biggest of its type in France, and a cross-country area with new snowshoeing itineraries. Access to the ski areas is easy thanks to a guest card system giving free use of local bus and train services.

Chamonix, which has 9,346 permanent residents and attracts 2.7 million visitors each year, is said to be the third most visited place in France after the Eiffel Tower in Paris (6.9 million) and Mont Saint Michel (3 million).