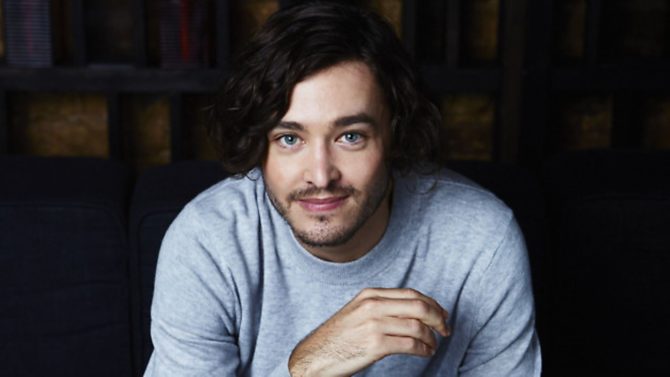 How did you feel when you got the role of Louis XIV’s brother Philippe?

When I first got the role of Philippe he was described to me as ‘a 17th-century David Bowie. I thought it was too good to be true; that they were making it up and that someone like that could not have existed in that time. It’s the sort of role, and Versailles is the sort of series, that shows that we really are in a golden age of television.

What was it like playing a famous figure from history?

The whole cast was taken to the Palace of Versailles on a Monday, when it is closed to the public, and we had the place to ourselves. We saw this amazing portrait with Louis wearing a toga and Philippe is next to him. Standing there, looking at the people we were going to play on screen, it was incredible.

Did you know much about Louis XIV and French history?

I didn’t really know that much about the Sun King. I knew what was happening during that period, but only from a UK perspective because that’s what we were taught in school. That ignorance worked in our favour since it frees you up to make some bold choices with the character. We had a French director (Jalil Lespert) with a much better knowledge of local history to explain when we were going too far but, if anything, I was told to be even more out there.

Find out more about Louis XIV

What was it like to film in some of France’s stunning châteaux?

We were incredibly lucky to have access to some amazing buildings. You could see that Louis visited these places and got ideas for his palace. For instance, Vaux-le-Vicomte is like a tiny Versailles. Louis probably went there and thought: ‘I quite like that, but I want it huge’. When you do eight months of filming, the novelty of working in these brilliant places wears off and it takes someone else to come on to the set and say: ‘Do you realise how lucky you are to be here?’

Did you enjoy wearing the extravagant costumes?

The men spend more time getting their wigs put on than the girls! The costumes really transform you. You show up in the morning in your jeans and within an hour and a half you’re wearing heels, tights and this amazing wig that costs £3,500. It changes the way you hold yourself. I’m a lazy person, so my shoulders hunch forward, but that’s impossible with what you are wearing on set.

The show has had some criticism – how did you cope with that?

I think we proved the doubters wrong. Funnily enough, when the British press came out and said how raunchy it was and that we were dumbing things down, it was the French media that immediately stuck up for the show. That says a lot.

A Canal+ production filmed in France, Versailles is a raunchy retelling of the events surrounding the construction of Louis XIV’s palatial playground in the mid-to-late 17th century.

Vlahos – who played Mordred in the BBC fantasy series Merlin – stars as the Sun King’s scheming, cross-dressing sibling and is one of the highlights in a TV series that has been surrounded by controversy since the moment it was announced.

The script was penned by UK writers David Wolstencroft and Simon Mirren, and features a largely British cast speaking English. Inevitably, French critics – already miffed at the ten-episode show’s huge €27 million price tag – baulked at the idea of such an important chapter in Gallic history being played out by a bunch of Brits who, in their eyes, didn’t know enough about the historical figures involved.

However, Versailles managed ultimately to win over its French critics. In addition to a storyline that is more slick political thriller than stodgy period drama, few shows on TV look better, with costume design straight out of the top drawer. Versailles also benefits from an amazing backdrop provided by locations on the outskirts of Paris. While interiors of the palace were recreated at a film studio in Bry-sur-Marne, exterior filming took place at eye-popping sights such as Château Vaux-le-Vicomte.

The result is a glamorous, sexy TV series that has proven a ratings hit in France, attracting one million viewers an episode. A second season of Versailles was commissioned before the first one had even aired in France at the end of last year.

An interview with Grégory Fitoussi