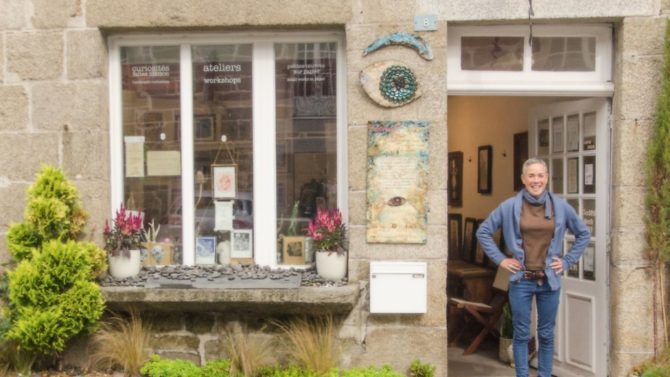 Some people move to France because they fall for a local, or fall for a house; artist Melissa Ferreira came to teach a six-week art course in Pont-Aven, Finistère and fell for the town and its people

Exploring the picturesque town of Pont-Aven in the Finistère department of Brittany, you’ll be captivated by its gurgling river, Fine Arts museum and winding historic streets filled with galleries. One of these tiny galleries just off the main road is run by an American artist, Melissa Ferreira. The window display itself is an invitation into another world, filled with curios and original artwork; even as you enter, you know you’re in for a treat.

Melissa is probably perched there sketching in a travel journal or intent on fine-tuning some artwork at her desk, where she is surrounded by comfortable clutter. She will greet you warmly in French but, as she’ll happily admit, her ‘charming accent and heavy heap of grammatical faults’ reveal immediately that she’s not from Brittany. So how did this American come to settle in such a pretty corner of France?

“Back in 2002, I was invited to teach summer courses at the Pont-Aven School of Art, part of a programme set up by art historian Caroline Boyle-Turner,” Melissa explains. “I’d never really travelled – I hadn’t even been on a plane until I was 25 – so when Caroline suggested this trip to France, it was an opportunity not be missed!”

Turning a French château into an artists’ retreat

In 2005, after three seasons of working here, the Pont-Aven programme became a year-round event, and Melissa was invited to teach regular courses in figural interpretations and illustration, all in English. Over the following four years, Melissa spent more and more time in France and finally made a permanent move, leaving America to settle in south-west Brittany.

“This happened organically, like so many of my life ‘choices’, through several small steps without an absolute objective. The notions of ‘go with the flow’ and ‘slow and steady’ are important to me. So, here I am!”

It sounds wonderfully simple… but surely it couldn’t have been quite that easy?

“Well, when I first arrived, the regular teaching post at the Pont-Aven School of Contemporary Art provided a certain financial stability, and it was an inspirational bonus, too. All of which meant that when it closed a little over five years ago, I lost more than just financial stability; everything changed.

Melissa set up her own business within ‘La Maison des Artistes’, a national association for professional artists that collects social contributions and gives them a formal framework, as well as being a platform for networking with other artists.

“Money is necessary but it has never been a priority for me. My life goal is to remain active in the arts by making images and objects that please me, as well as guiding others who wish to discover creative play.”

With this as a mission in life, Melissa in clearly in the right environment. Pont-Aven is renowned as a hive of creativity, having attracted and inspired great painters from all over the world since the 1800s, so it seems a perfect place in which an artistic soul should take root.

“It was not until I arrived in France that I understood my true creative potential, away from all those the familiar norms that I contained and that had also contained me. Coming here, I actually believed myself an artist. Perhaps it was the displacement plus my limited verbal capacities that pushed me to develop a more intense studio practice. There’s constant stimulation in this environment – the Breton and French languages, the cultural references, the sheer beauty of place. Not one day passes where I am unaware of the balance of my former American life and my current expat existence. I love it.”

How did these expats turn their hobby into a business?