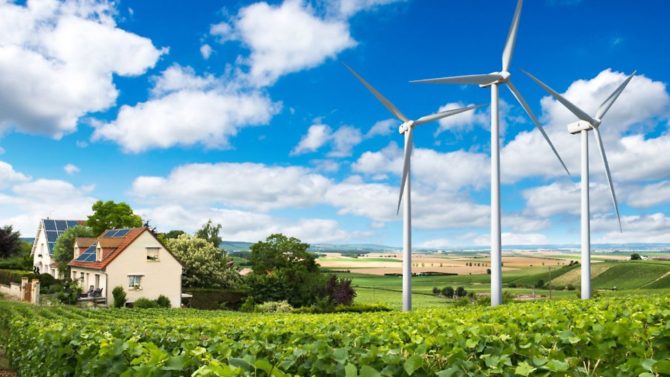 France has historically been on the leading edge of eco-friendly projects and regulations. While many argue that much more needs to be done to meet environmental goals in France and globally, here are 11 ways that French government, companies and people are striving to be green.

The world’s first 'fully recycled' road is made in France https://t.co/2nfOKSncmQ pic.twitter.com/hD1fGVXhUw

1. French company Vinci has built the world’s first fully recycled road – a 1km stretch of the A10 motorway between Pons and Saint-Aubin in south-west France. Material from old roads were ground down and reused in the new road.

2. Back in 2016, France made another world first by unveiling a 1km road, made from solar panels in the village of Tourouvre-au-Perche, in Normandy. The ‘wattway’ was built to produce enough power for all of the streetlights in the village.

Paris redesigned the urinal, but the real problem is the urinators https://t.co/k3x9VaPvMG pic.twitter.com/9ofKmkjZvJ

3. New open air urinals installed around Paris this summer had some eco credentials. They are metal boxes filled with straw, which could be composted to fertilise city trees. But they mainly served to further ignite the controversy over whether men should be able to urinate outside.

4. Green thinking is also influencing French fashion and the results have been a bit better received. Young French designer Marine Serre took a collection of mostly up-cycled clothes to this year’s Paris Fashion Week – including dresses made from second-hand silk scarves.

5. The Auchan supermarket chain in France has secured hundreds of hectares of land in order to make small urban farms around some of their sites to grow and sell local environmentally friendly produce.

6. In 2016 France became the first country to ban its supermarkets from throwing away or destroying good quality unsold food. The law now says that excess food that is in or just past its sell-by date must be donated to charities, food banks or for animal feed.

7. More recently plans have been proposed to ban French clothes stores from throwing away or incinerating unsold clothing regardless of its price or origin. Instead retailers would have to donate unsold textiles and clothing to recycling organisations or charities for re-use.

8. At the end of October 2018 French energy group Engie were given authorisation to create two new offshore wind projects off Noirmoutier and Île d’Yeu islands which sit by the western coast of France near Vendée. The French government has a 10-point plan in place (announced in January 2018) to double France’s wind power capacity by 2023.

9. France is also harnessing the power of its rivers. A farm of hydro turbines is being installed in the Rhône river, near Lyon, in a world first that will generate enough power for 400 homes.

11. France is implementing a new ‘bonus manus’ cost system to tackle plastic pollution. It will mean that the price of items packaged in non-recycled plastic could be increased by up to 10%, while the price of products sustainably packaged could be reduced by up to 10%.

Where are the greenest towns and cities in France?