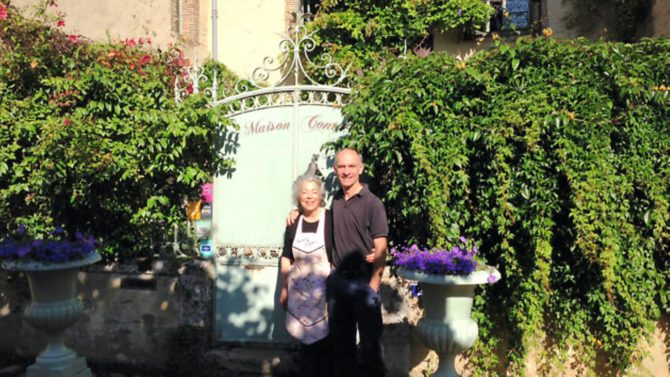 Would you move from San Francisco to Sarthe? This American couple did and they love their new life running an elegant chambres d’hôtes in a historic house in rural France

For Nancy and Richard Harrison, the decision to leave their full-time jobs in San Francisco to run a chambres d’hôtes in a small village in Sarthe, in Pays de la Loire, was a shock to most people they knew. But their choice of life in this rural corner of France over sunny California is something that their Sarthois neighbours have sometimes struggled to understand. The easiest answer is that their daughter Emily and their two grandchildren live in Paris; but the truth is that being close to their grandchildren is just one of the many reasons that the couple left their full-time jobs on the west coast for a more laid-back life running a B&B in the small historic village of Montmirail, 60km from the departmental capital of Le Mans.

The couple’s love affair with France started when they decided to buy a small holiday home in the department back in 2002. “it was back in the days when you still found properties for sale in little classified ads in the back of FRANCE magazine. We didn’t even know where Sarthe was. The advert showed a picture of a pony by a stream with a French cell phone number and the price was very low,” remembers Richard. “It said it was ‘perfect for artists’ and I said oh, I’m an artist! it must be perfect for me,” adds Nancy, who enjoys print-making. At the time, both their daughter, Emily, and their son, James, were living in France, so it seemed entirely sensible to buy a holiday home there. Captivated by the small stone moulin set deep in the countryside, the couple bought it and spent as much of their holiday time there as possible, while continuing their jobs in California where Nancy taught art, writing and drama to schoolchildren and Richard worked in telecommunications.

They enjoyed their time in France so much that in 2004 they decided to take a year out from their jobs and live in the moulin. “We came and stayed for a year, and because Emily was getting married and we were enjoying it so much, we just decided to stay,” says Nancy. “I tell people iforgot to go back to work,” laughs Richard. “It was pretty impulsive.”

The couple lived in the little stone moulin for a couple of years, and decided that if they were going to stay in France, they would need something to do, as well as generate some income, and setting up a chambres d’hôtes was the logical choice. Initially Richard looked into finding a job in telecommunications but this proved almost impossible. “Whereas we could be self-employed; and that was not only permissible, it was encouraged,” explains Richard.

Having fallen in love with the peaceful countryside of Sarthe, the couple put the moulin up for sale, as it was no good for their long-term plans, and set about finding a more suitable local property. “ilooked on the internet and saw a few ads for places near La Ferté-Bernard, which is where we are now. An estate agent showed us the properties ihad identified, but none of them seemed very nice. She said she had one more to show us, but it wasn’t really listed yet,” says Nancy. The property in question was an 18th-century house sitting at the foot of Château de Montmirail in the historic town of La Ferté-Bernard. “She brought us here and it was really quite magical, even though it was the middle of January. This old house was just so amazing and interesting and was ideally suited for what we had in mind. There was a room for my studio because I do print-making here, so that was fantastic!”

On the first floor were four bedrooms, which could be used as guest rooms, and on the second floor is a spacious apartment allowing them to live separately from their guests. “It didn’t have all the bathrooms we needed and was not completely organised the way we needed it to be, but it had all the elements; all the possibilities,” says Nancy. “We could have looked further and i’m sure there would have been lots of other properties, but it was kind of amazing that it worked out.”

Having bought the property in 2007, they decided to name it Maison Conti, after the Princess de Conti, the illegitimate daughter of Louis XiV, who lived in the neighbouring Château de Montmirail with her husband, the Prince de Conti. Known as a dépendance du château, the house was built by the princess for her chief minister in the 1700s. There is no escaping the close proximity of the château. “We can lean out of our kitchen window and talk to the owner!” laughs Richard.

The couple spent a year converting and decorating the property. The majority of the work involved putting in en-suite bathrooms for the four guest rooms, as well as in their apartment. Nancy admits that they fell into some good luck early on. “I was standing outside my atelier and this English fellow walked up to us and told us he lived in the village and fixes up old houses. It was perfect for us because he was very casual: he would let Richard work with him; he charged us on an hourly basis; he became our friend. It wasn’t at all stressful. He knew everything about everything.”

The couple decided to hire a professional plumber and electrician to do the work they couldn’t do themselves and overall were very pleased with the standard of work they carried out. “We got quotes from three or four people and we went with the middle bid, which seemed reasonable to us. We wanted high-quality stuff, which was a lot more work for them and idon’t think they over-charged us at all,” she adds.

As for the decorating, the couple got stuck in and did as much as they could themselves to keep the costs down. “We did all the lime wash, we re-rendered all the walls,” says Richard. “Coming from California where construction is so completely different, we’ve never done that before but we found out how to do it. I did most of that work and I really loved it,” adds Nancy.

The couple bought Maison Conti from a couple of antique dealers, and were able to buy a lot of furniture from them. Two of the bedrooms were already decorated: the Chambre Bleue, which is elegantly decorated in traditional toile de Jouy, and the Chambre Verte with its opulent canopied bed in rich green check and matching furnishings. Nancy wanted each bedroom to have a different colour theme and enjoyed decorating the Chambre Rose and the Chambre Jaune with lime wash paint.

Nancy and Richard had experience of renovating homes in California and decided to use the same Italian marble tiles in the bathroom of the Chambre Rose that they had used before in their own home. “it’s a natural rustic marble,” says Richard. “We just chose things as we went along – tiles that we liked, fixtures that we liked and put it together little by little.”

The couple also brought some of their own furniture from California, and Nancy found that buying from eBay was an easy way to find pieces that she wanted. “It seemed easy to get a nice piece of furniture delivered to you and not expensively,” she says. “We did buy one very beautiful table from Roche Bobois, but that wasn’t an antique. We were never really into antiques – our house was very modern. This is quite different for us,” says Nancy.

“A lot of our clients comment on the fact that it’s somewhat atypical for a house in this part of northern France. it has a sort of Mediterranean feel because of the wall colours we used; it has a sunny feel to it,” says Richard. “We really tried to preserve the basic character of the house. We kept all the original floor tiles. Our bathrooms all have modern fixtures but we kept the original oak beams which are exposed.”

Setting up the business was straightforward, and the couple found that their local mayor’s help was indispensable. “We find the people in this part of France so friendly,” says Nancy. “We did get a French accountant who sorts out the taxes which is very helpful.”

It took a couple of years for the business to get going. “The first couple of years were slim. A piece of advice we found really quite helpful was from a local woman. She runs a chambres d’hôtes in Saint-Calais and told us the Sarthe is very pretty but it’s not a big tourist destination, so you have to offer some activity,” remembers Nancy. It was at this point that they decided to start print-making classes.

As the years have gone by, word of mouth has helped the business grow. They are listed on Sawday’s, and just over a year ago they joined booking.com which increased their traffic significantly. “It’s a great location for people travelling from england to the south or going to Brittany. People also come here for weddings and Le Mans 24 event,” says Nancy.

The business has grown from strength to strength and the couple enjoy meeting interesting people of all nationalities. Roughly half their guests are French and the rest come from all over the world. “Often we get Americans, who come for an extended time and use us as a base. This area is not a tourist area per se but it’s very convenient for Paris; the train is direct from La Ferté-Bernard. We’re close to the autoroute which goes from Paris to the west, so it’s accessible and yet at the same time within an hour you can go to the Loire Valley, Le Mans or Chartres,” says Richard.

For Nancy and Richard, the lifestyle that comes with living in this part of rural France is really what makes it so appealing. “This pretty village surrounded by countryside is such a beautiful place to live. it’s a fantastic place for walking, bike riding and kayaking,” says Nancy. “It’s so quiet compared to California, where it’s so hectic.”

With so many reasons to enjoy their new lives in France, Nancy and Richard have no regrets about choosing Sarthe over California… even if some of their local friends still need convincing!

www.maisonconti.comRead about other expats in France: running a boutique chambres d’hotes in Languedoc-Roussillon; an elegant maison d’hôte in Provence and a stylish expat home in NormandyLearn about setting up a B&B in France and running a business